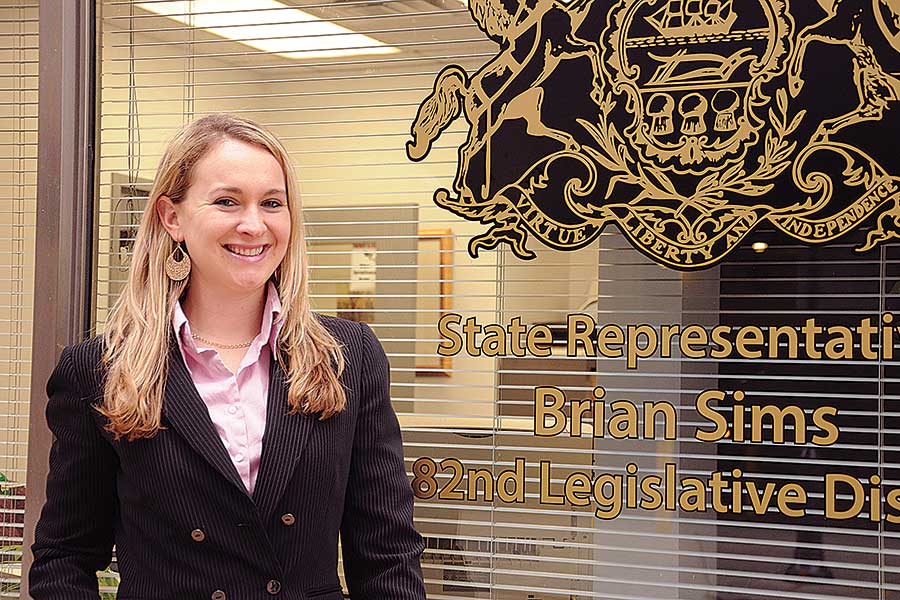 Nationally renowned LGBTQ youth-sports organization You Can Play has a new vice president of program development and community relations effective March 23. Anna Aagenes takes the reins to drive the organization into greater visibility and increased collaboration.

Former executive director for Go! Athletes and former co-chair of Penn Athletes and Allies Tackling Homophobia, Aagenes said she is very excited to be transitioning to such a visible and vibrant organization. When asked about what she is most looking forward to, Aagenes said, “I think I’m most excited about being able to focus on YCP’s inclusion initiatives for female athletes.”

Partnerships with other groups like Go! Athletes and Outsports are significant to making progress with LGBTQ youth, according to Aagenes. She said this is the right time to make big strides in LGBTQ youth-sports programs countrywide and believes a full LGBTQ sports coalition, like the one started by Nike two years ago, would make an even-greater impact now — while there is no doubt that Nike had a significant hand in broaching the subject of sports homophobia and inclusion.

Aagenes said one of the perks of her new position will be opportunities to work with former NFL player Wade Davis. Davis was in Philadelphia in December for the Philadelphia FIGHT gala and to play some dodgeball with Philadelphia LGBTQ youth (PGN, Nov. 13 and 27, 2014), which Aagenes was instrumental in setting up.

About leaving her position as state Rep. Brian Sims’ deputy chief of staff, Aagenes said, “As a Philadelphian and member of the LGBTQ community, my work for Rep. Sims has been both meaningful and rewarding. I truly loved my time serving as the deputy chief of staff, and I could not be more grateful for my fantastic boss, Rep. Sims, and for my ‘Team 182’ colleagues Mason Lane, Tim Keller and Sarah Rabot.”

More information on You Can Play can be found at www.youcanplayproject.org.

The winds of change are also blowing across the great divide of Gay Games and Outgames, and the winner should be the entire LGBTQ world. There have been two separate but not equal quadrennial events since 2004, when the Montreal Gay Games organizers disagreed so vehemently with the Federation of Gay Games that the FGG moved the games to Chicago and Montreal hosted its own Outgames.

Now, the two event organizers, the FGG and the Gay and Lesbian International Sports Association, announced jointly through a combined group called the Working Group the creation of a framework for a quadrennial One World Event (1WE). This effort began with extensive surveying of the LGBT population that began at the Gay Games in Cologne five years ago.

The 1WE Cologne Report ultimately will establish the groundwork for the eventual reunification of the two groups by addressing the concerns from both by promoting sports, culture and human rights as integral parts of the whole. When completed, the yet-to-be-determined name of that embodiment should be stronger and more comprehensive than the current two groups combined.

The projected time frame makes 2022 the likeliest year for the first joint production.

This should register for many

Registration for Stonewall Kickball is open and continues through March 30. League play is again at Franklin D. Roosevelt Park in the Deep South (Philadelphia). The Sunday leagues begin April 26, and April 30 marks the first evening of Thursday play. Go to stonewallphilly.org for details and to register. You do not have to have a complete team formed.

Later that same day, follow scores of players on the fourth-annual pub crawl starting at 4 pm. Shirts are $20 and the crawl schedule has yet to be announced. In the meantime, get out and play!

• The next Out Philadelphia Athletic League fundraiser is 9 p.m. April 18 at Tabu. The theme is “Heroes and Villains.”

• Sports and recreation info can be found inside the back page of the PGN every fourth Friday of the month or at any time at epgn.com. n

Springtime is the best time to get out and play! Tell everyone about it. Email [email protected].