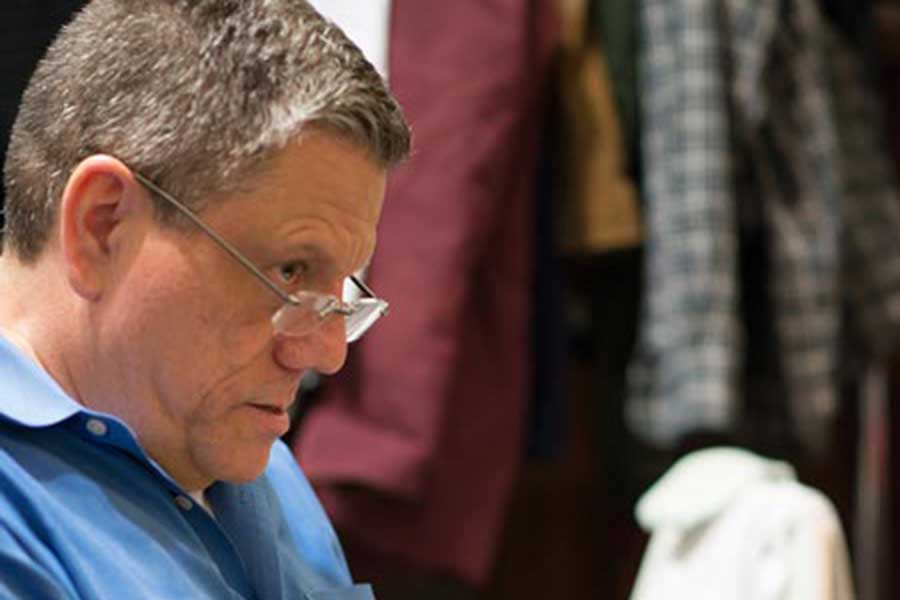 If Philadelphia theater, gay or straight, had but one hero, it could be Kevin Glaccum.

When the Greater Philadelphia Theatre Alliance shuttered suddenly in 2012, taking down with it the heralded Barrymore Awards for Philadelphia

theater excellence, Glaccum helped put together the organizational Theatre Philadelphia, served as its board president (still does) and revived the Barrymores.

When his still-young company, Azuka Theatre, found itself moving (confusingly) from space to space, he hooked up with the Art for Sacred Places nonprofit, grabbed a fellow small local company (Inis Nua) and, in 2012, birthed the Off-Broad Street Consortium and its eponymous theater in the sub-basement of the First Baptist Church, 1636 Sansom St. This allowed his fledgling Azuka — 15 years old this year — to hold three shows every season, sell subscriptions, host a playwright-in-residence and other programs. Considering that he’s running Azuka, cobbling together those seasons and directing most of its plays (such as Doug Williams’ just-opened David Lynch-like “Moon Cave”), Glaccum is not a man with much of a home life.

“No dog, single as a base hit,” he joked. “I work a lot — running Azuka, teaching, tending bar at Woody’s — and also see a lot of theater, so I guess I need to find someone that really likes theater.”

His professional life just got busier considering that the Off-Broad Street Theater will cease to exist April 30, leaving Azuka again on the move. Fear not: Its third show of the season will be held at Theater Exile, 13th and Reed streets, and a new massive space has already been secured (of which I am sworn to secrecy). The Sansom Street building was sold to another congregation, which, after lengthy negotiations, chose to terminate the theater’s lease .

“It’s sad; it’s such a great little space that enabled us to have our offices, rehearsal and performance spaces all in one building,” Glaccum said. “But, since the upcoming space is in the heart of Center City, it too will help start a new chapter in Philly theater.”

Pragmatically, Glaccum looks at his current chapter, “Moon Cave,” a sparsely conversational, Philly-based tale of sex, lies, identity and ghosts. Since Azuka has always found itself attracted to stories about people on the margins of society, “those who march to the beat of a different drummer,” Glaccum just went for the tag line: “Outcasts and Underdogs,” with Moon Cave standing right in Azuka’s sweet spot.

“The main character is putting together some kind of a life after having survived a violent episode in his childhood,” says Glaccum. “He’s just met someone that he wants to start a life with but, because of his isolation, he’s not able to do that. He’s kind of the definition of an outcast. I love telling stories about people like this guy, one whose life feels so different from ours when, on closer inspection, we find we have far more in common than we might have expected.”

Scripted by Williams in his professional stage debut, the playwright — a member of both the Orbiter 3 and Foundry writing groups whose work has appeared in the SoLow Fest and FringeArts — chooses a spooked-out, often-repetitive conversational motif somewhere between Christopher Nolan’s “Memento” and David Lynch’s “Lost Highway.” Only “Moon Cave” bounces between Philly’s Republican Club and Temple University rather than the Hollywood hills or the desert.

“Organizations like The Foundry and Orbiter 3 are real boons for Philly theater. The development of new local playwrights is something this city has been lacking for a long time, the missing link in Philadelphia’s theater community,” Glaccum said. “We are graced with a lot of wonderful actors and designers, but for many years there were only a handful of playwrights in town. Having The Foundry help foster these new voices and now Orbiter 3 creating and producing their own work, we’re moving into an incredibly exciting time for new plays in Philly.”

As for Williams (an Azuka playwright-in-residence, along with Jackie Goldfinger, with whom Glaccum is producing her trilogy of plays that started with “the terrible girls” and “Skin & Bone”), after letting the Azuka boss read his earlier plays, as well as the first rough draft of “Moon Cave,” there seemed to be a spark amongst comrades.

“We all have other lives, other chapters in our lives that have ended for whatever reason; that’s just human. I think one of the ways we let new people into our lives is by sharing our past. Not doing that can be distancing, and in worst-case scenarios can end the new relationship,” Glaccum said. “I guess most of us pick and choose what we share — we’re not always ready or willing to share our horror stories — but the more we share, the deeper the connection can be.”

The theater that Glaccum and Azuka love to make is where what’s happening on the stage, no matter how different it may be from the audience’s own experience, allows that same crowd to find corollaries in the work similar to their own experiences.

“Our audiences may not have the lives or the past that the characters in ‘Moon Cave’ have, but they’ll relate to sharing of secrets and the development of intimacy.”