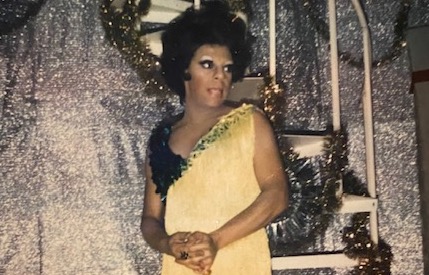 Les Harrison, Philly’s longest-performing drag queen of color, passed away on August 14, 2020. He would have been 78 this year. He left behind his friend and ex-wife Franny Price, his son Les, many people whose lives he touched and a lasting legacy as a beloved, barrier-breaking drag queen of color.

Harrison began performing drag in Philadelphia in the late 1960s, and was the first performer of color to get a spot on a whites-only stage in Philadelphia. He first performed as a female impersonator in Philadelphia at the Five O’clock Club and Sister’s Place, according to Price. He also began performing at the Forrest Lounge early on in his career, and he toured the U.S., Canada and Mexico. His fellow drag queens and contemporaries thought of him as a drag mother, and often called him “Momma Les.”

“It was always amazing, Les had his own following,” Price said. Harrison performed in nearly every club in Center City throughout his career, and continued performing periodically at Bob and Barbara’s into his 70s. He even did a show in early 2020 before coronavirus-related lockdowns ensued. “Les always loved the stage because he knew the stage loved him,” Price said.

Harrison was best known for his impersonations of Welsh singer Shirley Bassey, who sang a wealth of songs, including the James Bond theme “Diamonds Are Forever” and other hits such as “Something” and “Never Never Never.”

“I just loved [Bassey] from the very beginning,” Harrison said in a video interview with CA Conrad on the blog The Deviant. “When she sang ballads, it touched things that I had been through because I had been away from home since I was 13.”

As a Black drag performer, Harrison had to navigate a predominantly white, racist performance scene in his path to achieving success. For many of Philly’s drag queens of color, Harrison paved the way.

“Les was a legend,” said Lisa Lisa, a transgender drag performer of color who has been running shows at Bob and Barbara’s since the 1990s. “Every time I [had] him on my stage, I made sure that everybody knew that if it wasn’t for Les, a lot of us wouldn’t be doing what we’re doing today.”

“As a Black man it was hard enough to get a cab out of town, but him being in Drag, a lot of times he ended up having to walk three, four miles into town,” Little Les said, “just to go into a whites only gay bar and still have hate there, and get up on stage and have people throw stones and drinks at him. He eventually paid his dues and got to the point where he forced people to respect him, but that road there was not easy.”

Harrison and Price first met at one of Harrison’s gigs in the early 1970s. Price ended up running lights and sound for his shows, and taught him the basics of sewing, which facilitated his passion for making his own gowns. While Harrison and Price both identified as gay, they became best friends and raised kids together. Harrison had a longtime partner, Jackson, who passed away in 2018.

“I don’t have anything but fond memories of Les,” Price said. “We didn’t fight, we had this unique, loving relationship. Neither one of us was in love with each other, but we loved each other.”

Little Les also commented on his “colorful” childhood as a biracial person with a lesbian mother and a father who was a gay drag queen.

“As a kid I’d say I went through a lot of trials and tribulations. The one thing that I think made me who I am was just watching [my dad], no matter what, never changing who he was and being unapologetic.”

Little Les also talked about his father’s kind, giving nature in terms of acting like a parental figure both to adults and children in the community. As a kid, Les frequented The Attic Youth Center because even though he himself did not identify as a member of the LGBTQ+ community, he had little in common with his peers.

“That was a place I found comfort in,” Little Les said. “But I grew up with so many friends in their teens that their parents rejected them or threw them on the street. My dad was a mother to so many of them. I have friends that are five or 10 years older than me, and friends that are 10 years younger, all constantly tell me how much he took the time to help them discover who they are and not judge them, or at least be the mother they didn’t have.”

Harrison was very much a people person and would always engage with his audience members after his shows. He forged bonds with many people in the Philadelphia community and beyond, including fellow drag queen Marcello Brening Barrera, who first saw Harrison impersonating Shirley Bassey at the Center City club Applause Applause.

“I went in to see a show, and out comes Les and sings one of my favorite Shirley Bassey songs, and basically I lost my sh*t,” Brening Barrera said.” I was like, ‘oh my god, I can’t believe he’s performing this.’”

From there, the two went on to form a 15-year friendship. Both Price and Brening Barrerra commented on Harrison’s kind-hearted nature and inclination to ask after his friends’ and family’s loved ones.

“Even toward the end, he would go, ‘how’s your mom,’ and things that I would mention in passing he would just have it in his head,” Brening Barrera said. “If you told him something, it went into that vault. He was extremely kind, extremely loving.”

Price said she plans to set up a PayPal account in memory of Harrison to raise funds for Philly drag queens and impersonators who have lost income due to the pandemic.

“All those years, I think of how many shows Les did that he never got paid [for,]” Price said. “This will be my salute to not only Les, but to all these girls that couldn’t work since March.”

Little Les acknowledged the fact that not only did he lose his father, so many others who considered Harrison to be a parental figure are suffering the loss as well.