Who is the most famous gay man in America? Who is the gay man people most admire? Those are two very different questions. When Rich Berkowitz wrote an article in the February 1977 issue of PGN, his answer to both questions was: nobody.

The piece, titled “What This Country Needs Is A Good Gay Hero,” lamented the fact that famous gay men of the time like Tennessee Williams, Johnny Mathis, and Charles Laughton waited until very late in their careers, if at all, to come out as gay. Many of them had come out as bisexual (others would take decades before making the jump to gay). Some said they supported gay organizations but would not come out publicly themselves. The country didn’t have a singular gay male who was proud of his gayness and embraced the gay community. There was no gay north star for people to look up and see.

“There are, of course, some gay heroes,” Berkowitz wrote. “Many, in fact. The problem, however, is that they are either invisible as homosexuals or else they’re traitors sporting a heterosexual disguise.”

Eight years after the Stonewall Riots, gay rights and the gay communities were expanding across the country. But coming out was still risky. For people in fame and power, it could mean a loss of sales, a diminishing of credibility, an end to their careers. For people in conservative areas, it could mean being harassed, attacked, or killed. For everyone, it could mean losing friends and family who couldn’t handle the news.

Berkowitz noted a number of lesbian role models like Jill Johnston, Rita Mae Brown, and Elaine Noble, who all came out at the peak of their careers. He wondered where the equivalents were on the gay male side.

Dave Kopay, a football player in the NFL, came out in 1975 to much fanfare in the gay media. But his post-sports career had been flailing, and his fame quickly disappeared following the release of his autobiography.

In the 1970s, there was no road map on how to be gay. There were no general guides for people on how to come out, navigate relationships, or stay safe (though PGN and other local LGBT publications did publish features of that ilk). People found their own role models, but they were often heterosexual celebrities like Cher who posited the message of pride, people like Marlene Dietrich who were unapologetically themselves.

Was there back then, or is there today, a man famous for just being gay and happy? We’ve come a long way from the time when we were glad that people came out regardless of what part of the rainbow they were from. Now, people have to fit every single person’s every single idea of what the “right” kind of gay person is.

Perhaps it’s a good thing there was no singular gay role model back then, nor is there today. Having to find our own unique role models has helped our community become as diverse as it is today. If everyone models themselves after the same person, wouldn’t we be a community of sameness? Isn’t uniqueness what we embrace?

In 1977, Berkowitz worried that the lack of masculine gay role models would undermine the “normalness” of gay men. He wrote that gay men would always be seen as inferior to straight men because there were no James Deans, no Will Rogers, no Joe Montanas. In a patriarchal society, masculinity is what ruled.

It’s true that masculinity still impacts our community in positive and negative ways. That the word is used more often with “toxic” in front of it than standalone is testament to that. It will always be an issue we struggle with. Would an effeminate gay man lacking a deep voice be able to mount a major campaign for President? The question is, sadly, rhetorical.

Nowadays, there’s no shortage of openly gay men of all types. Those who are coming out in 2020 have their pick of who to model themselves after. But what exactly are they wanting to model? Freedom? Security? Self-expression? Masculinity? Perhaps the idea of an ideal gay role model doesn’t exist and it never has.

Maybe what was needed, and what is still needed, is the mere assurance that it was OK to take the step and come out. A role model doesn’t have to be famous; they don’t have to have ulterior motives like fame or fortune. Perhaps what’s best is someone who came out and lived to talk about it, someone who took the risk and settled into their own skin. Maybe that’s who people needed back then. Maybe that’s what we still need today. 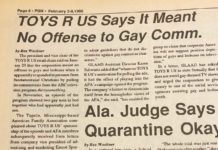 The tricky business of TV advertising 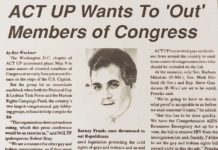 Should politicians be pushed out of the closet? 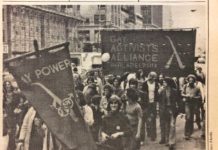