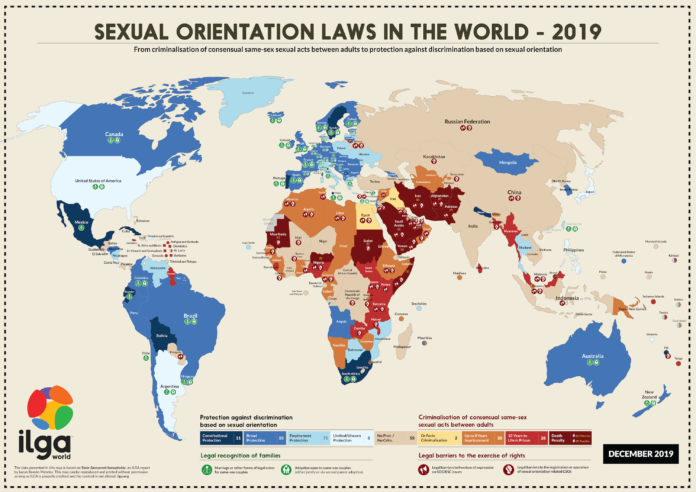 A map released from the International Lesbian, Gay, Bisexual, Trans and Intersex Association (ILGBTIA) in May details how consensual LGBT+ sexual acts are still criminalized in 70 countries, where it remains illegal to be gay or lesbian.

In Gaza and the Cook Islands, the death penalty is law but not enforced, although honor killings of gays and lesbians have been reported.

The ILGBTIA report also shows that discrimination against LGBT+ people is rife in the majority of the world where LGBT+ people are denied fundamental rights in employment, housing, marriage and adoption. In addition, there is little recourse for most LGBT+ people against hate crimes.

The report shows that although gay conversion therapy has been refuted as a scientific tool to “change” a person’s sexual orientation (or, in some cases, gender identity), only a handful of countries ban the discredited practice: Brazil, Ecuador, Malta and Taiwan. Germany just banned the practice in May.
Only 11 countries include sexual orientation in their constitution’s non-discrimination clauses — a mere 6%.

The report also finds that within UN States:

Only one in five (18%) have legal provisions that restrict the right to freedom of expression on LGBT+ issues.

Only one in five (22%) have legal provisions that prohibit the registration or operation of organizations that work on sexual orientation issues.

Only three in ten (30%) have laws offering broad protection from discrimination based on sexual orientation (in goods and services, education, health, employment).

Only two in five (40%) have laws protecting from workplace discrimination based on sexual orientation.

Only one in four (24%) impose enhanced criminal penalties for offences motivated by hate — known to many as hate crimes — toward the victim’s sexual orientation.

Only three in twenty allow LGBT+ people to have same-sex marriages (14%), and Taiwan recognizes marriage equality. Costa Rica joined them at the end of May 2020. Only a few more (16%) provide some type of partnership recognition.

Reports of anti-LGBT Incidents on the Rise in Israel, Task Force Says

The number of reported anti-LGBTQ incidents in Israel increased significantly in 2019, the Aguda Association for LGBTQ Equality reports. The organization said the surge may be the result of more complete reporting.

The association’s Nir Katz Center fielded 2,125 claims of discrimination, hate or harm based on gender identity or sexual orientation last year, a 36% increase over 2018, when there were 1,557 reported incidents and 2017, when 533 cases were reported.

The organization said it was difficult to correlate the increased numbers with social or political changes, although anti-LGBTQ statements by public figures have been on the rise. Six percent of the complaints to the Aguda were also reported to the police.

According to the report, 39% of the incidents involved government institutions. They related primarily to the conduct of officials from the Interior Ministry’s Population and Immigration Authority toward members of the LGBTQ community in connection with procedures such as registering marriages, gender changes, parenthood, the issuing of birth certificates and issues involving surrogacy abroad.

About 29% of the reported cases last year related to incidents within the family, including insults, humiliation and, on occasion, even exclusion from the home and community. Fully 26% of the cases reported to the Aguda were from minors.

The Aguda said 272 juveniles were forced to leave home last year due to anti-LGBTQ attacks. The worst case of violence involved a 16-year-old who was stabbed by his brother. That case is pending in Tel Aviv District Court. In another case, young people were attacked outside the Haoman 17 club in Tel Aviv.

Human Rights Watch reported that Hungary’s parliament has passed a law making it impossible for transgender or intersex people to legally change their gender, This will put them at risk of harassment, discrimination and violence in daily situations when identity documents are needed. HRW said “The law is a major backwards step on transgender and intersex rights, and yet another violation of Hungary’s

international rights obligations. It comes at a time when the government has used the Covid-19 pandemic as a pretext to grab unlimited power and is using parliament to rubber-stamp problematic non-public health related bills, like this one.”

The legislation redefines the word “nem,” which in Hungarian can mean both “sex” and “gender,” to specifically refer to a person’s sex at birth as “biological sex based on primary sex characteristics and chromosomes.” According to Hungarian law, birth sex, once recorded, cannot be amended. This means that anyone who doesn’t identify with the sex they were assigned at birth — such as transgender people — will be denied the right to change their legal gender marker to correspond to their identity.

Intersex refers to the estimated 1.7% of people born with sex characteristics that differ from social expectations of female or male. HRW said the new law compounds the marginalization that trans people in Hungary already face. A recent survey showed that 95% of respondents in Hungary believe the government does not effectively combat anti-LGBT bias. It also violates Hungary’s obligations under the European Convention on Human Rights.