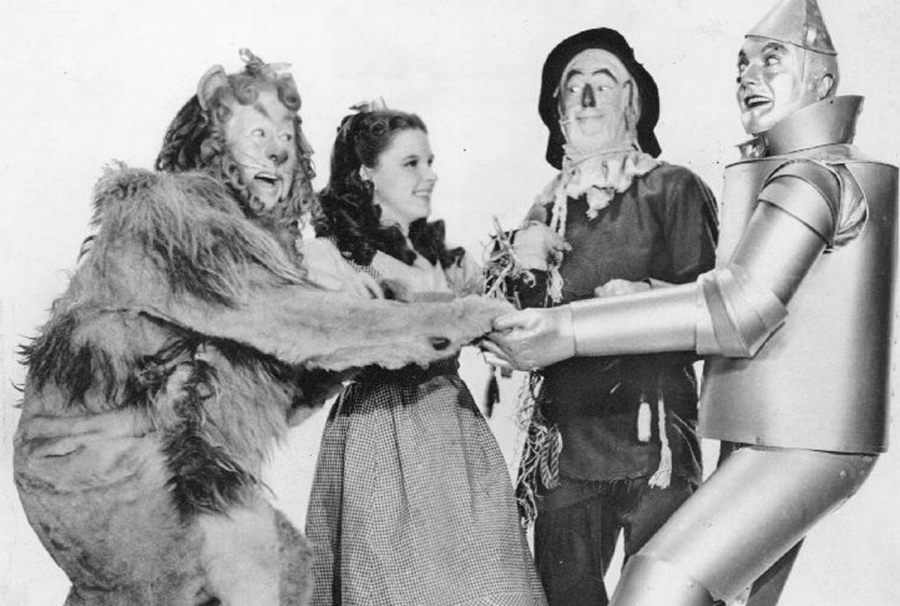 Nobody seems to know quite how or why “The Wizard of Oz” became such an enduring part of LGBT community and culture.

It is, of course, common knowledge that Judy Garland is a gay icon — beloved and worshiped by gay men of a certain age and class — but what else explains the ubiquitous references to “Oz” in drag performances and in the names of bars and businesses catering to the community? Movie quotes appear on an array of LGBT-themed merchandise, from postcards of Dorothy enticing us to visit San Francisco to Glinda T-shirts impelling us to “Come out, come out, wherever you are.”

It would be a mistake to confine a discussion of “The Wizard of Oz” to a certain class of gay men, but in seeking a point of origin, there is a dominant narrative of queer history in which “Oz” and Garland were important parts of a mostly white, middle-class, urban gay male subculture by the 1950s. Garland spent much of the decade on popular concert tours, and it was also during this time that “The Wizard of Oz” began to be shown on television on an annual basis. The origin of the expression “Friend of Dorothy,” which became a code phrase used by gay men to identify themselves to each other, is lost to history — it may have predated this era, and may not even refer to Garland’s role in the movie, but the belief that it does is widespread (another possibility is it refers to Dorothy Parker, who was also a friend to gays). According to “Oz” scholar Dee Michel, who is writing a book on “Oz” and gay men, there are certain beliefs about the film and the LGBT community that persist in spite of a lack of clear historical evidence.

“These beliefs,” he said, “overlap and reinforce each other and have become part of gay folklore, increasing our sense of history and reinforcing gay identity.”

Much of what we do know about “Oz” and its significance in LGBT culture in the 1950s and ’60s is from later accounts. Some disparaging remarks about gay men attending Garland concerts were printed in reviews in the late 1960s. Other print references to “Oz” as an underground culture shared by gay men seem to show up in the 1970s and ’80s, looking back and attempting to explain the appeal of the film. These explanations often identify gay men and others with a girl from a small community who is misunderstood by her family, who is whisked away to a place where she becomes friends with characters who seem like they could be gay men (especially the Cowardly Lion, who refers to himself as a “sissy” and “dandy lion”). The story became a metaphor for the real-life dreams and experiences of gay men who left middle America for the gay communities of New York City and San Francisco, analogized to Oz or the Emerald City.

There is also the unique place occupied by Garland among gay icons. While many divas are admired for their strength, with Garland this strength is mixed with her obvious vulnerability. Garland’s struggles seemed to mirror those of gay men at the time, and she was admired for rising above her problems in performance, although as she noted herself, she was never able to get over the rainbow in her life off the stage or screen. Both Garland’s image as a diva and the movie’s camp style, which provided an ironic way of looking at the dominant culture, are thought to contribute to the queer appeal of “Oz.”

Whatever its origins, as the late 1960s ushered in the era of LGBT liberation, this mythology came out of the shadows and became a contested part of the narrative of queer history. For some, it has never been a coincidence that the Stonewall Riots erupted the night after Garland’s funeral on June 27, 1969. The suggestion that her death contributed to the tension that led to the rebellion has spread widely but also been much called into question. There is some doubt as to whether the participants in the riots — drag queens, hustlers and underage patrons among those who frequented the bar — would have been Garland fans at all. Nevertheless, gay folklore and films continue to tell the story, quite possibly imposing the perspective of white, cisgender gay male historians on an event that was largely the work of queer and trans people of color.

At the same time, the symbolism of Garland’s death at the beginning of the modern LGBT-rights movement does have some potency. Her passing represented the passing also of the era of secrecy and assimilation to the beginning of liberation. Camp and diva worship, which had been secret codes of the closet, became public symbols of pride and identity. Ten years later, at the 1979 March on Washington, according to Michael Bronski, lesbian singer Holly Near ended her set with “Over the Rainbow,” calling it the gay national anthem.

Today there is a lingering sense that the Garland/“Oz” obsession is a generational one, even an embarrassing stereotype. Contemporary examples, however, suggest that “Oz” continues to be embraced by wide constituencies in the community. Rufus Wainwright has spent much of the last several years recreating Garland’s legendary Carnegie Hall performance, Patti LaBelle continues to sing her own empowering version of “Over the Rainbow” at LGBT events and Toddrick Hall’s “Straight Outta Oz” explores his experiences as a young, queer man of color through identification with various situations from the story. “The Wiz,” a Broadway musical produced by a black gay man and adapted as a film starring Diana Ross, occupies an important place in both black and gay culture.

Artist-activist Gilbert Baker, a native of Kansas who made his own way to San Francisco, has denied having “Over the Rainbow” in mind when he designed the rainbow flag in 1978, but the association sticks for many people. LGBT choruses sing “Over the Rainbow” at community and political events where rainbow flags are flying. After the suicide deaths of several young people in the fall of 2010, including Rutgers University student Tyler Clementi, crowds gathered for a vigil in New York’s Washington Square Park, waving rainbow-colored glow sticks while openly gay Broadway star Cheyenne Jackson led them in singing “Over the Rainbow.” In moments such as this, a song and symbol that arose as the coded dreams of a marginalized group half a century ago have become symbols of visibility and community, tracking the emergence of LGBT people from the shadows to the public square in an ongoing and widening appeal for acceptance and compassion.

Ryan Bunch is a musical-theater scholar and “Oz” enthusiast. He recently co-chaired the 2016 National Convention of the International Wizard of Oz Club in Philadelphia.