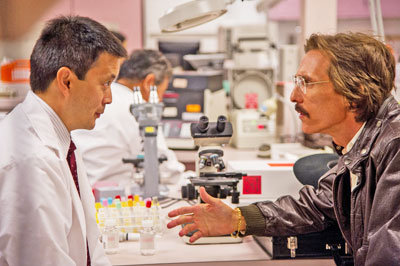 Ron Woodroof (Matthew McConaugh-ey), the HIV-positive protagonist of “Dallas Buyers Club,” is a scrawny electrician who works hard and plays harder. In the opening moments, he is seen having sex during a rodeo competition and placing bad bets on cowboys. When the riders fail to last eight seconds, Ron’s creditors chase him. He seeks escape by punching a cop (Steve Zahn) so he will be arrested and extricated from a bad situation.

That Ron schemes to make fast cash — and skirts the law to keep it — is at the core of “Dallas Buyers Club,” an impressive, comic and heartfelt film about people with AIDS coordinating the distribution of unapproved (i.e., illegal) medical treatments because hospitals, pharmaceutical companies and the FDA are moving too slowly.

McConaughey’s performance, both Oscar-worthy and Oscar-baiting, is remarkable. The Texan, who transformed himself by losing considerable weight to play Ron, relishes his role. He walks around all cocky, strutting about in a cowboy hat or donning a priest’s vestments when undercover transporting drugs across the border.

In the film’s early scenes, Ron is diagnosed with HIV. He is shocked by the news, especially when his doctors (Denis O’Hare and Jennifer Garner) inform him he has a T-cell count of 9 and just 30 days to live. He is also shocked that people think he is gay. Ron is a homophobe who voices crude comments about Rock Hudson’s sexuality. He maintains that even though he has been handed a death sentence, he does not want to attend support-group meetings “to get a hug from a bunch of faggots.”

“Dallas Buyers Club” shows how Ron transforms himself — as well as the lives of many other AIDS patients in the 1980s. He educates himself on treatments and gives a janitor at the hospital money to get clinical trials of AZT. When he cannot secure more AZT, Ron goes to Mexico, where a crafty doctor (Griffin Dunne) whose license has been revoked helps him obtain drugs that will sustain his life, even though they are not legal in the U.S.

However, Ron suffers some medical setbacks, and during one hospital stay, meets Rayon (Jared Leto), a transsexual AIDS patient. The roommates dislike each other but form an uneasy friendship that turns into a useful business arrangement. Ron secures the medication, Rayon secures the clients. The pair forms the Dallas Buyers Club, a subscription-based service that dispenses free medication to AIDS patients, who become members that “buy into” the “club.” Of course, this irks the doctors who are seeing less of their patients because they are seeking alternative treatments.

“Dallas Buyers Club” makes Ron and Rayon’s story compelling because the film creates a sense of urgency around their situation. The film unfolds by counting out the days from when Ron was given 30 days to live. As the illegal drugs extend his life for weeks, months and even years beyond that projection, Ron becomes empowered. But, his efforts are dogged as he is hunted by the IRS, the FDA and others who want to shut down his operation. How he handles these obstacles in his rascally, wily ways is the charm of both McConaughey’s performance and the film itself.

One prime example of the film’s appeal is an encounter Ron has with an old friend who avoided him after Ron disclosed his HIV status. Running into the man in a supermarket, Ron’s old buddy makes a disparaging remark about Rayon. When Ron strong-arms his friend and forces him to shake Rayon’s hand, it shows the heart of the once-homophobic character who has become less hateful.

Rayon humanizes not just Ron but “Dallas Buyers Club” as well. While the character could easily have been a caricature, Rayon, a drug addict, proves to be an interesting co-conspirator. He has a love-hate relationship with Ron that brings out the best — and worst — in both of them, adding depth to their relationship.

Less successful is the relationship between Ron and Dr. Eve Saks (Garner), which moves from simple flirting to the doctor’s willing and unwilling support of Ron’s drug-import efforts. Garner is disappointingly wooden in her role, making it the film’s greatest weakness.

But McConaughey is fantastic and great fun to watch when he misbehaves — chasing AZT with a beer and a line of coke — or passionately fights against the FDA. Leto also provides memorable support in his role, looking far better in a dress than his ill-fitting suit.