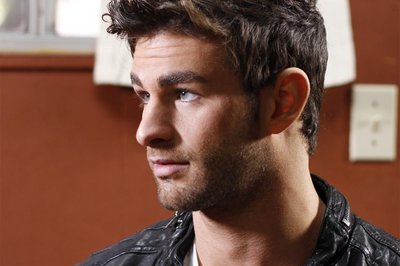 Openly gay Richboro native Chris Salvatore reprises his role of the clueless, love-struck hunk Zack in “Eating Out 4: Drama Camp. ” The film, which had its world premiere at QFest earlier this month, will be televised July 25 on Logo. A DVD release is scheduled for October. The handsome actor was recently in Philadelphia to talk about the film and his career.

Over a prescreening drink at Positano Coast, Salvatore described growing up in Richboro as being akin to living in “a bubble.” He says he kept local until high school and moved to Hollywood when he was 20. But after a year, he moved to New York to study acting at the New York Conservatory for Dramatic Arts. It was after school, when he moved back to Los Angeles, that he was cast in “Eating Out 3: All You Can Eat,” and its two sequels, “Drama Camp” and “Eating Out 5,” which is slated for a January release.

Yet Salvatore initially dreamed of a career as a singer. He explained how appearing in the “Eating Out” film(s) helped broaden his fanbase.

“They heard my music [in the film] and looked me up. I get messages saying, ‘I didn’t know you were a singer.’ I’m grateful. I have my music, so I have something to do when I’m not acting,” he says, adding, “But after this film comes out, I’ll pursue getting an agent and turning up the volume a bit with the acting.”

The actor’s vocal talents are on display in “Drama Camp” as Salvatore gets to perform a catchy title musical number. He acknowledges that he attended musical-theater camp when he was 15 and, like Zack does in the film, performed a Shakespeare excerpt in his dramatic studies.

“We had to do our own modern take on [The Bard]” he recalls, “but it was not as crazy as what’s shown in the movie.”

“Drama Camp” sees Zack perform a same-sex kiss — and love scene — with Benij (Aaron Milo) in the film’s play-within-the-movie version of “Taming of the Shrew.” The actor said he and Milo got along very well on set and shared a “special bond.” This made shooting their kissing and love scenes more fun. He even confessed that, “looks-wise, Aaron is my type.”

For the record, gentlemen, the adorable Salvatore is currently single.

As for shooting the film’s mandatory sex scenes, such as an intimate encounter between Zack and Benji on stage, Salvatore reveals his secret: “I just go into a different place in my head.” He maintains that he tries not to over-think it or become self-conscious.

Salvatore also says he doesn’t embarrass easily. Although he went full-frontally nude in “Eating Out 3” and got his ass waxed in that film, the actor does not do nudity in “Drama Camp.”

“I already did that,” he maintains. “You already saw [my penis]. I’m not ashamed of the full frontal. I’m happy with it and how it turned out. But I don’t want to be naked in every movie I make.”

Performing sex scenes or awkward moments on a film set is exciting, perhaps even liberating for the actor. He especially enjoyed an early sequence in “Drama Camp” in which his character is splattered with blood in a shower scene.

“I’ve always wanted to be in a scary movie,” Salvatore gushes like the blood that covers him, “so when we had to do that, I was like yes! More blood, more blood!” He adds: “I’m a huge horror buff. I love gore. I love it!” He counts the remake of “The Texas Chainsaw Massacre” among his favorite horror films.

“Drama Camp” also addresses the dynamics of gay/straight friendships and the tensions that form between queer and questioning youth and their straight peers. It is a topic that speaks to Salvatore, who overcame being a shy, bullied teen in Richboro.

He spoke out for the “It Gets Better” campaign and wrote a song about bullying. The actor felt a need to participate, given a traumatic moment from his teen years. He recalls a jock he thought was his friend rubbing lead from a pencil all over his face during a health class.

“Every gay friend I’ve had has always been bullied in school for being gay. It’s the straight guy/jock who is bullying the gay kid. It’s sad but that’s the reality.”

But now that Salvatore’s career is taking off and he’s developing a huge gay audience, he is confident, not intimidate — except, he insists, when it comes to romance. The genial actor acknowledges that he’s very close to the character of Zack.

“The writers picked up on my own quirks and personality. I’m indecisive, and I can play that really well. I use that to my advantage; it’s part of my charm.”