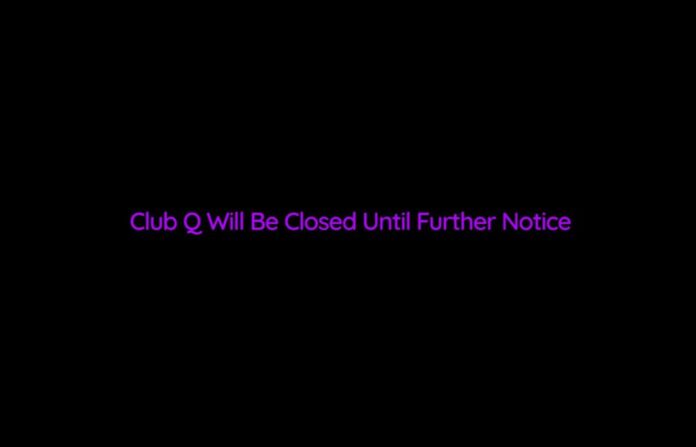 Wiping tears from his eyes, Joshua Thurman, 34, a Black gay man who was at Club Q Saturday night as yet another enraged young man with an assault weapon began shooting, told local ABC News affiliate KRDO, “This was our only safe space in Colorado Springs. Where are we going to go?”

Where indeed? Where would it be safe?

On the eve of the Trans Day of Remembrance, the crowd at Club Q was there for a drag show and to celebrate and memorialize those who have died from anti-trans violence. Yet before the clock struck 12, one of the victims would be a trans woman, Kelly Loving, who at 40 was living her best life, according to her sister and friends.

As a teenager in Philadelphia in the 1970s, I was sneaking into the clubs with a fake ID and a desperate need to meet other gay people and begin building my own queer community. My first gay club was The Hideaway, a bar under a big neon 13 sign on 13th Street and St. James Place, in what would become the heart of the Gayborhood. The Hideaway looked like something out of a movie set: seedy, dark, and nothing like the high-end boutiques and restaurants we have now. The streets near the club were populated with queer and trans people you never saw in Philly neighborhoods. Men unafraid to be overtly queeny, women unafraid to be seriously butch, trans women dressed beautifully in mini skirts and the highest of heels and hair. These were my people, this was where I could be safe to be myself. The short walk from the Broad Street subway to the club never ceased to give me a frisson of excitement.

At 14, I knew nothing about how to be queer, just that I was. In the era immediately post-Stonewall and pre-internet, finding the LGBTQ community wasn’t easy for anyone, but especially not for teenagers. I first went to The Hideaway with this woman I had a crush on, Maria. She had long straight red hair that she ironed and bangs that fell into her eyes and I was mesmerized by her. We were both singers in a local blues band.

Maria had a girlfriend, a wiry dark-haired Italian butch who called herself Jack. When I was 14, I looked 18, but I definitely didn’t pass for 21. When I look at that baby face now, I wonder how I ever thought I could pass for an adult and why the adults let me pass.

I am so grateful they did.

That first night was a whirlwind for me. The Hideaway defined me as a lesbian. I was never going to be straight. These were my people, this was where I belonged.

The Hideaway would be my home away from home, along with a few other gay bars — Rusty’s, The Allegro, The Mystique — until I was in college, when it closed. I would grow up in those bars, protected and nurtured by older butches like Larry, who ran the door at The Hideaway, and Rusty at Rusty’s, and a few others. They were the butches who protected me from the police when there was a raid and the lights would flash in the bars. They were the butches who taught me how to be a lesbian. They were my butch mothers, my butch mentors and I will never forget them. I owe them so much.

Those years were difficult for me. I was expelled from high school, Girls High, for being a lesbian. I’d run away from home several times and was forced to go to a strange fast-track school for delinquents like myself after I was expelled because no public school would take me. I tried to commit suicide, as did two of my high school lesbian friends. I’d been hospitalized in a local psyche ward for conversion therapy to “fix” my lesbianism. I was not fixed.

The only place that felt safe, that felt like home, was The Hideaway and the other gay bars. The night I graduated from the high school for delinquents, my family wasn’t there. There are no photos. I headed from my graduation to The Allegro to dance, my cap and gown rolled up and stuffed behind the bar.

I was 16. Soon I’d be in college. But the gay bars, the places that had protected me and made me feel wanted and safe and free to be myself, remained a refuge and a respite from what was so often a homophobic storm outside those walls.

That’s what I thought about as the news broke about Club Q, as I heard the crying Joshua Thurman say, “You felt like you had to come up into our safe space and shoot us up.”

LGBTQ people live with the threat of violence every day. We experience it all the time in various forms from microaggressions in the workplace or at school or with our families of origin to various forms of violence as we go about our lives in the homophobic and transphobic society in which we live.

It’s impossible for cis-het people to understand what it’s like to constantly have to explain and justify your lives to others. On the night of my wife’s recent sudden death, the police came to take a report — a standard procedure in Philadelphia when someone dies at home. What isn’t standard procedure, nor should it ever be, is turning away from the recently widowed spouse to a biological family member as the officer did to get her report. Despite being in our bedroom, despite my wife lying beside me in our bed, this officer turned to my wife’s brother, who I had called to be there, for the report. Not the widow of the woman lying in the bed next to her.

The mass shooting at Club Q is symptomatic of the way LGBTQ people are treated in this society. We can call it a tragedy. We can say that it’s about too many guns in the hands of young men with untold personal grievances. But the fact is, LGBTQ people are still hated and still viewed as less than their cis-het peers. Just days before the shooting, 37 senators with millions of gay and lesbian constituents voted against protecting same-sex marriages in the Respect for Marriage Act. And throughout the midterms anti-LGBTQ rhetoric fueled the GOP campaigns, including in Pennsylvania.

When will people who are not queer or trans say that enough is enough? When will they say: no more?