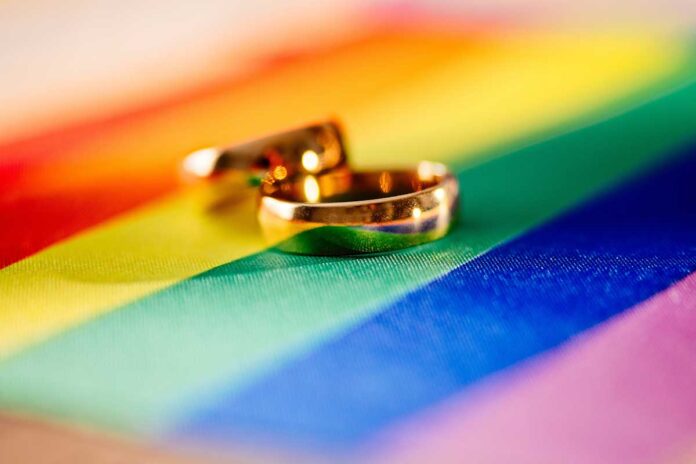 On July 19, the House passed the Respect for Marriage Act (RFMA) with 47 Republicans voting in favor of the bill. On Nov. 16, the Senate advanced the bill 62-37, with plans for a final vote after Thanksgiving. Twelve Republicans joined every Democrat in support of the bill. Democrats have made passing the RFMA a top agenda item while they still control both houses of Congress.

Over 70 percent of Americans support same-sex marriage and think that those marriages should be recognized by the law, a record high according to Gallup.

The RFMA was sponsored by Sen. Tammy Baldwin (D-WI), the first out lesbian in both the House and Senate. Baldwin told Wisconsin Public Radio’s “The Morning Show” on Nov. 18 that she and other Democrats, like Arizona’s Kyrsten Sinema, the first out bisexual in both the House and Senate, worked with Republican senators on an amendment that would quell fears about infractions on religious liberty. Baldwin said the amendment has been endorsed by religious groups like the Seventh Day Adventists, the Church of Latter Day Saints and the National Association of Evangelicals. It will be added to the bill as it moves along toward passage.

This was the proving ground for the RFMA. There are 35 states with constitutional or statutory bans on same-sex marriage. All these bans were invalidated in 2015 by the Obergefell ruling. But if the Supreme Court overturns the right to same-sex marriages, those state laws and constitutional amendments would be law again, just like anti-abortion laws since Roe was overturned.

A ruling overturning Obergefell would not reverse state laws allowing same-sex marriage: Some states had legalized gay and lesbian marriages prior to 2015. Massachusetts was the first to legalize same-sex marriages in 2003. Other states followed: Connecticut, Hawaii, Maine, New Hampshire, New York, Vermont, and Washington. Pennsylvania legalized same-sex marriage in 2014. Those laws would remain in place.

Virginia repealed its same-sex marriage ban in 2020, when Democrats won a majority in the state legislature. Also in 2020, Nevada passed a voter referendum to remove an amendment prohibiting same-sex marriage from the books. In January 2022, Democratic New Jersey Gov. Phil Murphy signed a law making all marriage and civil union laws gender neutral.

Speaking from the Senate floor prior to the vote, Baldwin said, “This legislation unites Americans. With the Respect for Marriage Act, we can ease the fear for millions of same-sex and interracial couples have that their freedoms and their rights could be stripped away.”

Baldwin said, “By passing this bill, we are guaranteeing same-sex and interracial couples regardless of where they live that their marriage is legal and that they will continue to enjoy the rights and the responsibilities that all other marriages are afforded. And this will give millions of loving couples the certainty, the dignity and the respect that they need and that they deserve.”

Baldwin said that the law would help lift “the weight of the world” from the backs of couples under threat from the possible repeal of Obergefell.

Senate Majority Leader Chuck Schumer said that passage of the legislation would be “one of the true highlights of the year for this body” and “one of the more significant accomplishments of this Senate to date.”

Schumer, whose daughter is a lesbian, said from the Senate floor that his daughter and her wife were expecting a baby and that he wanted “them, and everyone in a loving relationship, to live without the fear that their rights could one day be stripped away.”

Senate Minority Leader Mitch McConnell, who has been in an interracial marriage with former Trump Cabinet member Elaine Chao since 1993, voted against the bill which also protects interracial marriages legalized in 1967 by the Supreme Court ruling in Loving v. Virginia.

While Sen. Ron Johnson (R-WI) had said in July he saw no reason to oppose the bill, in September, Johnson, who was in a close re-election campaign, asserted that he had been trying to “get the media off my back” by saying that.

After the vote, Johnson told media that the amendment won’t protect people whose religious beliefs oppose same-sex marriage and that the amendment “leaves a lane open for discrimination by activist groups, state governments and the IRS.”

On Nov. 17, Sen. Mike Lee (R-UT) asked the Republican senators who voted to advance the Respect for Marriage Act to adopt more stringent protections for people who believe marriage is solely between one man and one woman. The proposed Lee amendment bans the federal government from discriminating against anyone who holds a religious belief or moral conviction that marriage is a union between one man and one woman.

Lee wrote in part, with 20 other GOP senators: “The undersigned ask that you oppose cloture on the Respect for Marriage Act unless the Lee amendment is added to the bill. The free exercise of religion is absolutely essential to the health of our Republic. We must have the courage to protect it.”

If the Senate votes to approve the RFMA, it will go back to the House to be voted on in its modified form before it can be signed into law by President Joe Biden.