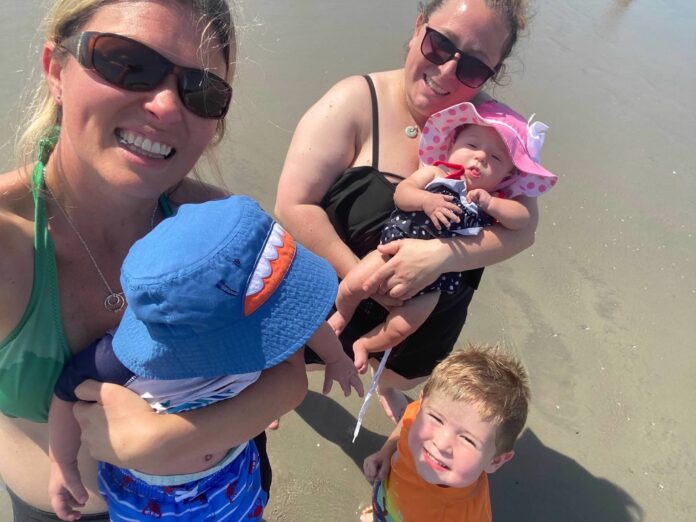 Ah, Labor Day Weekend! It’s the time of year when countless beach-lovers in the Philadelphia area make the trek down Route 47 to the Jersey shore, soaking up a few last days of rest and relaxation in the sun. This year, our family counted ourselves among those who made the trip — though rest and relaxation were definitely not part of the equation.

After a year filled with pregnancy complications, marathon NICU stays, medical concerns and so much more, Ashlee and I hadn’t gotten a chance to take Jackson and the twins on any kind of pseudo summer outing altogether (we can barely get it together to get everyone around the corner for a walk). Near the end of the summer, a family member suggested we pack up our chaotic clan and stay at their beach house near Wildwood, and we couldn’t pass it up — though we were highly fearful of just how chaotic it would be taking a 4-year-old, 10-month-old twins and a dog on a four-day excursion. And oh, were we right!

After a week of gathering beach toys, feeding chairs, books, blankets and just about every other item that wasn’t nailed down in our house, our packing was finally done — just about an hour past schedule! Not bad, I thought. And like clockwork, Avery had a diaper blowout just as we were about to lock the front door, putting us a bit further behind schedule.

Five minutes into the drive, we took turns running into Wawa for our requisite morning coffees, and that’s when things started going awry already. As I was getting back in my brand-new car (a super-cool mom minivan), I fumbled my full coffee everywhere, christening the front seat. And when I came back out with a fresh cup, I saw Ashlee bent over the back seat armed with towels, mopping up Avery’s reflux-induced projectile vomit with which she christened my back seat. Off to a great start!

When we arrived, I took Jackson for a walk and he took a spill on gravel, getting a nice scrape on his elbow — and setting off a solid hour of tears. For the entire rest of the vacation, he refused to bend his arm and held it — in the ocean, on rides, in bed — bent, like he was in a cast. The 4-year-old drama definitely doesn’t stop on vacation!

Actually making it to the beach on our second day there provided just as much hilarity. We intended to leave the house bright and early at 8 a.m.; in reality — after meals, changes, diaper incidents, tantrums and more — we parked at the beach (10 minutes from the house) at 11 a.m., with everyone in a sour mood from the stress of the morning. The four-block walk involved Avery strapped to my chest with a too-big hat that kept flopping over her entire face, August asleep in a car seat perched precariously in our wagon, with Jackson shoved partially under him, yelling that he was being squished by his brother and the bag of about 100 beach toys, along with chairs, a tent, a blanket, a cooler, feeding tube supplies, diaper supplies and who knows what else. As Ashlee pulled the wagon, toys fell off the side and went rolling down the sidewalk with every bump — with Jackson screaming that he was going to lose them and me chasing them, poor Avery bouncing along.

Hot, sweaty, annoyed and already filled with sand, we spent a half-hour setting up our tent, while trying to shield the little ones from the sun and wrestle them with sunscreen. We plopped the babies in the sand and the ocean for their requisite first beach videos, helped Jackson dig some holes, ate sandwiches filled with sand and beat it out of there two hours later as all three started their afternoon meltdowns.

How times have changed

When Ashlee and I were in our 20s, we frequented Wildwood and other Jersey beaches every summer. I remember we would bring some tanning oil, a cooler full of beer and a blanket and park it in the sand for a solid eight hours — reading, napping, knocking back brews with friends, with the only time we moved off our blanket being to cool off with a dip in the ocean.

Oh, how things have changed! I thought that many times on this trip, comparing vacations of yesteryear to those now with a troop of kids, a hell of a lot more responsibility, and probably a lot more sense. Drinking before noon? Scandalous! No packed lunches — what did we eat? No sunscreen all day? I should go see the dermatologist now.

While parenthood certainly changes your perspective, the shifts can be a little jarring sometimes. On the drive down, I was thinking back to so many drives Ashlee and I took when we would have the windows down, blaring Kesha or Britney Spears, probably driving way too fast in her little blue sports car. Now, here we are, in our gigantic minivan, with a string of 4-year-old questions being yelled from the backseat — “Are we on a highway?” “Where does sand come from?” “How do sinks work?” When the interrogation died down for a minute, I finally heard the song we were listening to — “Put your butty on the potty and do a poop,” a new favorite from a weird British toddler show Jackson watches — and just shook my head.

Whenever I’m out somewhere with the twins and Jackson — especially if I’m by myself, and particularly if the dog is in tow! — I will, no fail, be greeted by passersby with an assortment of: “Looks like you’ve got your hands full!” “You need an extra arm!” “You’re going to be tired tonight!” It drives me absolutely mad. But this time, I actually found the well-intentioned observations a bit endearing.

Because, in a family vacation spot, other parents get it. They know the sweaty, miserable slog to the beach, the frustration trying to push a stroller through the narrow aisles of an arcade, the indecision about rushing your kids off the boardwalk to get to bed on time or letting them stay up late and overindulge on ice cream.

More times than I could count, middle-aged and older couples stopped us on our treks down the beach: “Oh, I remember those days!” “It gets easier when they get older.” “I miss those times.” One man joked that, as his kids aged, he was able to lose the beach toys and fit more beer in his wagon; another woman smiled knowingly — then blessed herself when she saw we have twins.

Parenthood is a club — a stressful, expensive one with absolutely no rules — and sometimes it’s heartening to know there are so many others who have been in your spot. And it’s perspective-shifting to hear from those who wish to be back there.

I understand now why people say it’s magical to see Christmas through the eyes of a child — and excitement like a family vacation is no different.

Despite the juggling act we as parents have to do, those stresses melt away in moments where you can see the joy and wonder of just doing something new on your kids’ faces — and it really is infectious. I loved walking down memory lane as we drove through Wildwood, pointing out motels I stayed at as a kid or where I went for ice cream, and seeing Jackson get into these stories and ask questions. When he squealed with delight every time Ashlee and I broke our feet free from the sand piles he had shoveled on us, I thought back to my own days as a kid on the beach, burying my dad’s feet in the sand. And seeing August and Avery experience everything for the first time — August trying to shovel fistfuls of sand into his mouth, Avery just smiling out at the ocean, both of their eyes as big as they could be with the lights and sounds of the boardwalk — I recalled Jackson’s first trip to the beach three years ago, and how much — and how quickly — he’s changed.

A lot goes into a family vacation, and nearly all of it is for the kids. But what parents can take away — those incredible memories seeing your kids try something new, follow their unbridled excitement, soak in the comfort of a trip planned just for them — means so much more than the work and stress. Our kiddos are only going to want to be on vacations with us for a handful of summers, so — chaos or not — I’m already looking forward to planning our next family vacation.