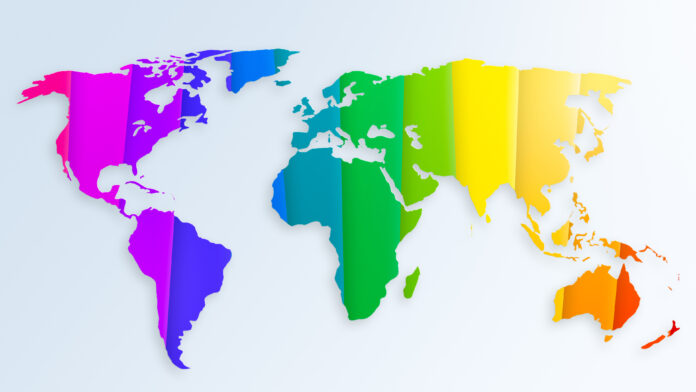 Meloni, who would head the most right-wing Italian government since World War II, has stridently denounced what she terms “gender ideology” and “the LGBT lobby.”

Fabrizio Marrazzo of the Gay Party said, “Unfortunately there are very real fears” about Meloni rolling back LGBTQ civil rights. He said, “The League and partly Brothers of Italy have in their manifestos things that are quite negative for our community, like stressing the importance of protecting only the traditional family.”

Meloni, a single mother, considers herself a “defender of Christian values.” She has dismissed references to her party being fascist, despite her adoption of Mussolini’s mantra of “God, Fatherland, Family,” and likens herself to the U.K.’s new Tory Prime Minister Liz Truss (who also has a poor record on LGBTQ issues).

Like MAGA GOP in the U.S., Meloni has infused her campaign with incendiary anti-LGBTQ rhetoric, telling supporters, “Yes to natural families, no to the LGBT lobby, yes to sexual identity, no to gender ideology, yes to the culture of life, no to the abyss of death.”

Meloni has repeatedly stated her opposition to adoptions and surrogacy for same-sex couples, and in the week prior to the election, Federico Mollicone, the culture spokesman of her Fratelli de Italia (FdI) party said same-sex parenting was wrong. Critiquing an episode of the beloved British children’s cartoon “Peppa Pig” that featured a polar bear with two mothers, Mollicone also said that “in Italy homosexual couples are not legal, are not allowed,” saying gay parents “cannot be presented to minors as an absolutely natural fact.”

Italy legalized same-sex civil unions in 2016, but the FdI opposed the law. In a Facebook message responding to an LGBTQ activist who confronted her several weeks before the election, Meloni said: “I believe a child has the right to grow up with a father and a mother.”

Pro Vita & Famiglia, a conservative Catholic lobby that opposes sex education in schools, has called on the new government to choose an education minister opposed to “any gender and LGBT ideological colonization in schools.” A theme similar to that of MAGA GOP like Florida Gov. Ron DeSantis and Texas Gov. Greg Abbott.

Italy ranks 23rd in the 27-member European Union in legal protections for LGBTQ people, according to the advocacy group ILGA-Europe. Italy is the only major country in Western Europe that has not legalized same-sex marriage. While Italy has legalized same-sex civil unions, these do not give same-sex gay couples the same rights as married heterosexual couples. Joint adoption is not allowed for same-sex couples.

Despite Meloni’s definitive win in the election, in June, an Ipsos poll showed that 63% of Italians backed marriage rights for gay people, up 15 points from 2013, and 59% were in favor of gay adoptions, an increase of 17 points from 2013.

The law required 50% of voters’ approval to be adopted. The reforms of existing law, which often reflected staunchly anti-LGBTQ policy, were fought for over years by gay rights activists in Cuba.

The Código De Las Familias referendum legalizes same-sex marriage and civil unions, allows adoption and surrogacy by same-sex couples, and promotes equality among men and women when it comes to sharing domestic rights and responsibilities, according to the 194 page law.

In a tweet, Cuban President Miguel Diaz-Canel wrote, “Justice has been done…Starting today, we will be a better nation.” He ended with the hashtag, #ElAmorYaEsLey — love is already law.

“It is paying off a debt with several generations of Cuban men and women, whose family projects have been waiting for this law for years,” he said.  Diaz-Canel led the campaign for the new law.

According to BBC, official attitudes towards homosexuality in Cuba have changed, partly due to efforts by former leader Raúl Castro’s daughter Mariela.

The new law, which was opposed by religious groups, evangelical churches and other non-religious conservatives, was a radical shift for the Communist island nation. In the 1960s and 1970s, Cuba persecuted gay and lesbian people, sending them to work camps for “re-education” and later isolating people with AIDS.

The Serbian Orthodox Church and a fringe right-wing party have demanded the replacement of textbooks they say “promote LGBT ideology.”The groups object to Serbia’s education ministry’s recent alterations in school curriculum to be more inclusive of gender identity and sexual orientation, with a demand for an urgent session of parliament’s Education Committee and an introduction of legislation banning “promotion of homosexual propaganda and transgenderism to minors.”

These objections mean Serbia’s education minister must wait for the National Education Council to determine the “scientific soundness” of the new curricula as well as whether it “serves the national interest” to allow schoolchildren to be taught with diverse models on gender and sexuality.

But LGBT+ activists and advocates assert that this is yet another example of the government caving to religious and anti-LGBT+ groups.

Pivoting off anti-Pride protests, Serbian Orthodox Patriarch Porfirije called on the public to demand the withdrawal of an eighth-grade biology textbook.

He said the book “imposes an unacceptable LGBT ideology.” Porfirije said Orthodox Christians “cannot accept the imposition of new social norms that were not propagated by God.”

Another right-wing party leader, Bosko Obradovic, said there was “controversial LGBT content” in five biology textbooks for eighth-graders, an eighth-grade history book, a fourth-grade sociology textbook and a high-school manual on civic education.

Obradovic asserted that “the LGBT movement is trying to impose its ideology on the education system, even though that ideology is completely unscientific and unconstitutional.”

“They want to dehumanize us with that phrase,” Ana Petrovic, a queer woman who lives in Belgrade, told Radio Free Europe/Radio Liberty’s Balkan Service.

“It’s loud right-wing propaganda that causes us great harm and behind which there’s no genuine argument hidden,” said Petrovic, who works for the Da Se Zna NGO, which provides psychological and legal support to the LGBT community. “In reality, we are how we are, and we’re citizens of this country.”