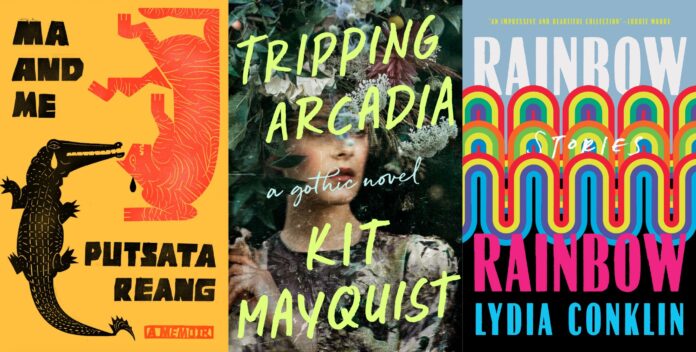 No matter what Republicans tell you, there’s never a bad time to get lost in a queer book. But now just happens to be a really good time to do so as parents pressure administrators to ban books with LGBTQ+ content from school classrooms and libraries. You can take action against these conservative groups relentlessly pushing their troubling censorship efforts. One way? To simply exercise your reading rights by supporting these LGBTQ+ stories and authors.

“You Made a Fool of Death with Your Beauty,” by Akwaeke Emezi

Nigerian fiction writer and video artist Akwaeke Emezi, who identifies as non-binary transgender, has been a celebrated queer voice — a “once-in-a-generation” one, according to Vulture — since “Freshwater,” their 2018 debut novel that is currently being adapted into a TV series for FX. Since then, Emezi has gone on to achieve major prestige, including being named a “5 Under 35” honoree by the National Book Foundation that same year. Their 2019 book, “Pet,” which explored identity and justice, was a finalist for the National Book Award for Young People’s Literature. And their latest book, “You Made a Fool of Death With Your Beauty,” the story of Feyi Adekola grappling with the aftermath of her lover’s death, was described by The New York Times Book Review as “an unabashed ode to living with, and despite, pain and mortality.”

“A Previous Life” by Edmund White

National Book Award-winning author Edmund White explores polyamory, bisexuality, aging and love in “A Previous Life,” a book about Sicilian aristocrat and musician Ruggero and his younger American wife Constance’s decision to break their promise to each other to refrain from sharing intimate details about past relationships. Their transparency leads to some revealing revelations about each other: Constance was married to multiple older men, and Ruggero has loved not just women, but men too. And White, whose book experiments with writing himself into the story as a secondary character, just happens to be one of them.

A visiting professor in fiction at the University of Michigan in Ann Arbor, Lydia Conklin’s “Rainbow Rainbow” pulls from various aspects of queer, gender-nonconforming and trans life for this collection of stories: a young lesbian and her lover try to have a baby with an unprofessional sperm donor, a fifth grader dresses as an ox for a class “Oregon Trail” reenactment, and a nonbinary person experiences an open relationship alongside their top surgery during the height of the pandemic.

“Ma and Me” by Putsata Reang

Described as “a layered story of queerness, assimilation and displacement” to the press, author Putsata Reang’s memoir sheds light on the gay refugee experience in America as she — born in Cambodia, raised in rural Oregon — tells her own story of intergenerational trauma and her complicated relationship with her mother, which she describes as “painful.” In “Ma and Me,” which is based on her Modern Love essay in The New York Times, Reang recalls how, in her 20s, after doing everything she could to be the kind of Cambodian daughter who would make her mother proud, she came out to her. Her mother tells her it’s only a phase, but then, in her 40s, Reang marries a woman, forever changing her relationship with Ma. A journalist for The New York Times, Politico and The Guardian, this is Reang’s first memoir.

“Just By Looking at Him,” by Ryan O’Connell

Ryan O’Connell is currently playing a gay pop culture nerd on Peacock’s “Queer as Folk” reimagining, while also serving as a writer and executive producer. And before that, he created “Special,” the Emmy-nominated comedy-drama loosely based on O’Connell’s life as a gay man living with cerebral palsy that ran for two seasons on Netflix. Now you can add author to his ever-expanding resume with his first foray into fiction. “Just By Looking at Him” tells the story of Elliott, who masks his alcohol addiction with a smoke-and-mirrors career as a TV writer. He’s cheating on his boyfriend, though, and things aren’t great overall. All the while, he has cerebral palsy, which makes him feel like a “gay Shrek.” O’Connell’s story is about the fight to overcome addiction while also searching for acceptance in an ableist world.

Colton Haynes lays bare his thoughts on stardom, addiction and living as an openly gay man in Hollywood in his debut memoir, which is described as the story of “a man stepping into the light as no one but himself.” The star of TV shows like “Arrow,” “Teen Wolf” and “American Horror Story,” Haynes writes about a death scare in his 20s that led to his sobriety. He chronicles that galvanizing episode in the book, when he woke up in a hospital after having two seizures, lost sight in one eye, ruptured a kidney and was put on involuntary psychiatric hold. His frank storytelling and emotional transparency moved Elton John and his husband David Furnish; they called the book a “brutally honest memoir that socks you in the gut with its candor,” adding that “Miss Memory Lane” is an example of “how conquering our demons in life is a never-ending journey.”

If you’ve ever been desperate for a job, you might understand Lena’s situation — to make money, in this case to support her financially challenged parents, no matter how unusual the work. And working for one of Boston’s most elite families is… weird. Weirder, too, the more Lena, a med school dropout, learns about the family; there’s that mysterious live-in doctor and Jonathan, the sickly poetic and drunken heir to the family empire. The author is Kit Mayquist, who is trans, and “Tripping Arcadia,” her debut novel, is a Mexican Gothic soap opera where the champagne flows as freely as revenge and greed.

The second novel from author Douglas Stuart, winner of the Booker Prize for “Shuggie Bain,” is, at its tender core, a story of queer love and working-class families. Stuart, of course, is no stranger to steeping his literary work in queerness: In “Shuggie Bain,” his coming-of-age debut novel, he wrote about Hugh, a young gay boy growing up in the 1980s with an alcoholic mother. Now, in “Young Mungo,” we meet Mungo and James, who grow up together in a Glasgow housing estate. A world seeks to divide them, but their against-all-odds friendship — that, in time, blossoms into a romance — pushes against the violent, dangerous forces they must, like many queer people, face together.

“Time Is a Mother” by Ocean Vuong

“I was grieving, the world was grieving, and the only thing I really had was to go back to poems,” Vuong, who wrote “On Earth We’re Briefly Gorgeous,” told TIME magazine earlier this year. At the time, he was expressing how his mother’s death, paired with the pandemic, led to his latest work, “Time Is a Mother.” The openly gay Vietnamese-American essayist and novelist, whose mother died in 2019 from breast cancer, writes about how he survived that loss in the collection, his second poetry book after 2016’s “Night Sky with Exit Wounds.”

Author and humorist Jill Gutowitz has been writing about her gay relationship with pop culture (thankfully lots about Taylor Swift) for 15 years, in magazines such as the New Yorker, Vanity Fair and Vulture. Now, in her first book of essays, “Girls Can Kiss Now,” the journalist and essayist expands, with her signature wryness, on the pop-culture stuff that makes her tick. And then, of course, there is, as the back of the book promises, “the time the FBI showed up at her door because of something she tweeted about ‘Game of Thrones.’”

​”I Was Better Last Night” by Harvey Fierstein

Harvey Fierstein is a bona fide gay legend across the board, from his illustrious stage and screen career (among his most memorable work: “Torch Song Trilogy,” “Hairspray” and “Mrs. Doubtfire”) on through “Kinky Boots,” the Tony Award-winning musical he wrote the book for. Of course, there’s everything in between and everything that came before, and in his first memoir, “I Was Better Last Night,” Fierstein reflects on all of the above. The book covers aspects of his life as a prominent figure in the LGBTQ+ community, including his community theater roots in Brooklyn, his nonconformist childhood and two seminal moments in queer history — the early gay rights movement in the 1970s and the AIDS crisis the following decade. In a 2015 interview with Pride Source, Fierstein said, “I don’t believe in life after death, so whoever’s gonna remember me is none of my business, certainly. I ain’t gonna know about it.” With this memoir, surely, though perhaps unintentionally so, he’s given us yet another reason to not let him slip away into oblivion.