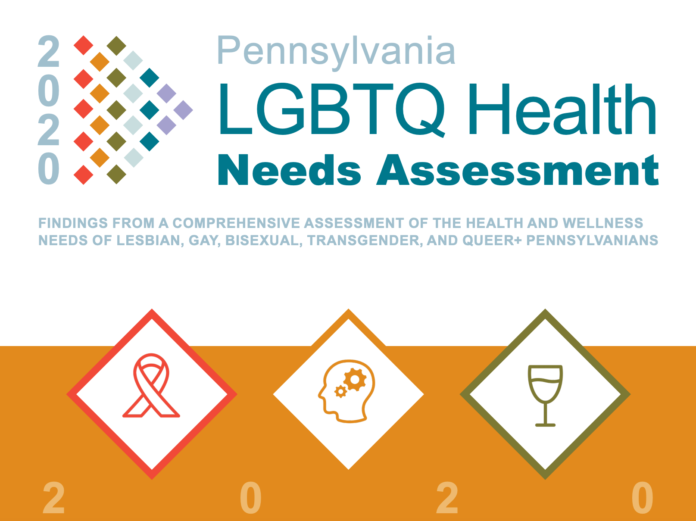 Being an LGBTQ person in Pennsylvania means a greater chance of having serious health needs and less access to healthcare to meet those critical needs. So says the 2020 Pennsylvania LGBTQ Health Needs Assessment administered by the Bradbury-Sullivan LGBT Community Center, in partnership with Pennsylvania Department of Health and Public Health Management Corporation (PHMC).

The Pennsylvania LGBTQ Health Needs Assessment measures the health disparities of LGBTQ Pennsylvanians with regard to HIV, cancer, tobacco, mental health, alcohol and other drug usage, healthy eating and active living, food and housing security, intimate partner violence, experiences with discrimination and violence, access to healthcare, quality of healthcare and other key metrics.

The report, which is compiled every two years, explains the risk factors LGBTQ people face and explores the myriad barriers to healthcare access.

The 2020 needs assessment explores new topics including food and housing security, which have been greatly impacted by the pandemic and which PGN has reported on in the past month.

“After three cycles of data collection, Pennsylvania now has the most comprehensive state-level LGBTQ health data in any state,” said Adrian Shanker, executive director of Bradbury-Sullivan LGBT Community Center, who started the project in 2015.

But Shanker was quick to add that “it’s our responsibility as advocates to utilize the data to improve the health of our community. This report is a roadmap that can direct resources and programs where they are needed the most.”

The data revealed in the assessment is daunting. Most troubling was the data that more than one in three LGBTQ Pennsylvanians — 35.4% — believe most of their healthcare providers do not have the medical expertise to appropriately and accurately address their health needs as an LGBTQ person.

Other worrying data revealed the extent that LGBTQ people are isolated from help and support. At a time when the pandemic has isolated young (25 and under) LGBTQ people as well as elderly LGBTQ people (60+) more than their cis het peers, the report noted that nearly one in five LGBTQ Pennsylvanians say they rarely or never get the emotional support they need (19.5%).

Worse still is the detail that seven in ten LGBTQ Pennsylvanians have experienced a mental health challenge in the past year (72.9%), yet only four of those seven are receiving mental health counseling or treatment.

In 2019, PGN did a three-part series on LGBTQ domestic violence. In 2020, PGN reported on the increase in hate crimes against LGBT people being disproportionate to their demographic. According to the FBI and Uniform Crime Report on hate crimes, nearly one in five of such crimes now has an LGBT victim.

Data collected through the Pennsylvania LGBTQ Health Needs Assessment is used by public health professionals and LGBTQ organizations to develop programs designed to address health disparities in the LGBTQ community; mobilize support for such programs; and fuel advocacy efforts at the local, state, and federal levels.

Graham Brasavage added that the significance of the data in the report cannot be overstated, stating “We have the incredible opportunity to put the data and findings back in the hands of the community.”

Throughout the Trump administration, significant efforts were made to restrict access to healthcare providers and health insurance for LGBTQ people. This assessment underscores how damaging that has been for the community overall.

The breadth of the findings released in the comprehensive new statewide report are alarming, particularly given the tenuous nature of healthcare access during the pandemic, which has been surging in Pennsylvania since mid-November and has reached its highest levels this week. The new report is the second statewide survey from the Bradbury-Sullivan Center, the health department and PHMC.

In 2015 and 2016, the survey was piloted in several regions. A record 6,582 LGBTQ Pennsylvanians from 913 zipcodes across 64 of the state’s 67 counties completed the survey. Included were cancer screenings, mental health challenges, HIV and STIs and overall access to care.

The survey also comprehensively measures LGBTQ health challenges from tobacco, alcohol and other drug usage, which are disproportionate within the LGBTQ community.

An extraordinary aspect of the assessment is the inclusion of real data on intersex individuals, who are routinely underserved by healthcare providers. The assessment included the largest known sample of intersex health challenges in any state.

The work the Bradbury-Sullivan Center is doing for LGBTQ health is critical now more than ever as healthcare has been defined by COVID-19 for nearly a year. LGBTQ people are already less likely to reach out to the healthcare system, as PGN reported in a series in 2019. And even cis het people have been reluctant or fearful to access medical care during the pandemic.

Shanker notes that the assessment is “the most comprehensive LGBTQ community health data in the US. The statistics provide vital and significant data on LGBTQ health,” and adds that “No other agency has been able to collect this kind of data in the US.”