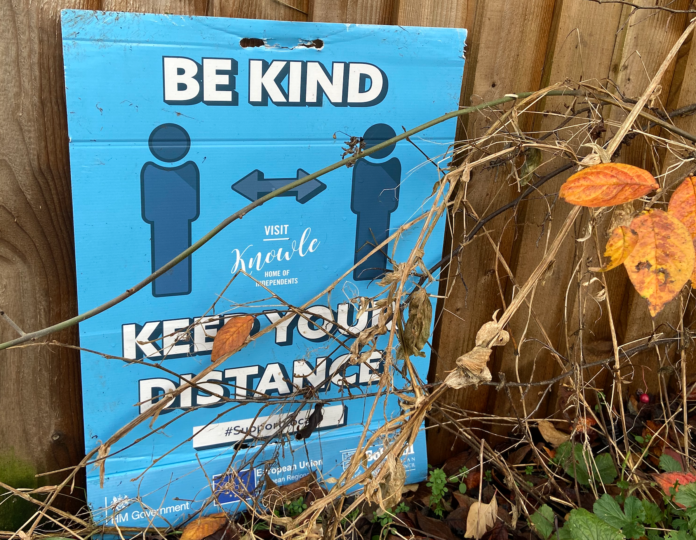 At month nine of this seemingly endless pandemic, we could all use a little holiday togetherness. Health officials around the U.S. have been urging people not to convene in-person with family members this Christmas in an effort to stanch the spread of COVID-19. In Pennsylvania, Gov. Tom Wolf’s renewed restrictions including a ban on indoor dining and the closure of gyms drew backlash from some business-owners, many of whom have outright defied the order. Indoor gatherings are also forbidden, but that probably won’t stop some people from mixing households for a few hours this season.

In England, where my partner and I are currently staying in an attempt to visit her family in some physically distant manner, officials have been instituting their own sets of restrictions to mitigate viral spread while maintaining some semblance of everyday life. We took a risk by traveling, I know, but we have been playing by the rules to the best of our ability and plan to quarantine for two weeks upon our return.

Momentous news came in early December when England administered the first COVID vaccines. However, the country has a long way to go before the vaccine is available to the general public. In the meantime, the U.K. is currently on a three-tier system of lockdown: medium, high and very high. About 99% of the country is in the upper two tiers, according to the BBC. This includes Birmingham in the West Midlands, where I am at the moment. Tier three restrictions mean that you can’t mix households indoors, in private gardens or the majority of outdoor venues; bars, pubs and restaurants can remain open for takeout and delivery only; spectators cannot attend stadium sporting events; bowling alleys, movie theaters and other indoor entertainment venues must stay closed. It’s very similar to Pennsylvania’s restrictions. Brits in tier three can, however, meet in a group of up to six in places like parks and beaches. Retailers, gyms and personal care services can stay open.

London, England’s most populous city, was initially placed in tier two, which caused some controversy. The assigning of lockdown tiers in England at times seemed to have more political implications than practical ones. Some members of parliament and working class British citizens publicly discussed what they believe to have been classist tier assignments, preventing some people from keeping their businesses going in areas with relatively moderate transmission rates. Under tier two, folks can gather in groups of six in private gardens and public spaces, pubs and bars can remain open only if they serve a substantial meal with or without alcohol, up to 2,000 people can attend a sports game, and larger gatherings are permitted including weddings and communal worship. Perhaps not the best idea for a city of almost 9 million.

Similar to the mindset, unfortunately, of too many Americans, some London residents have been casually walking the streets as if there’s no pandemic, or so my mother-in-law tells me. To that end, we were surprised to observe on a post-quarantine walk that residents of our temporary suburb, Knowle, and presumably all parts of the country, are free to roam around outside mask-less. Conversely, masks are required to enter supermarkets and other public indoor spaces.

Like officials in U.S. cities and states, the Brits have had their own series of debates surrounding seemingly inconsequential details such as what constitutes a substantial meal in a tier two restaurant. One of last week’s U.K. news trends was whether or not a scotch egg (a soft or hard-boiled egg wrapped in sausage meat and deep fried in bread crumbs) is generous enough to count. Some consider it an appetizer, while others find the scotch egg to be hearty enough to pass. And by hearty, I mean capable of causing a heart attack.

Tier restrictions are continuously changing and were last updated on Dec. 19, bumping London and most of the Southeast of England into a newly-formed tier four, essentially instituting a stay-at-home order. Non-essential stores, hair salons and entertainment venues must close and mixing of households is prohibited, as is traveling abroad. Birmingham remains in tier three.

U.K. Prime Minister Boris Johnson had also been contemplating revising the initial plan to relax limitations from Dec. 23-27, allowing residents of England, Scotland, Wales and Northern Ireland to temporarily “bubble” with up to two other households over the Christmas holiday. In light of a new variant of the virus, which British health officials are saying is no deadlier but 70% more contagious, Johnson changed the game again; he announced that tier four residents can no longer mix households over Christmas, and everyone in the lower tiers can celebrate with two other families only on Christmas day. “When the science changes, we must change our response,” Johnson said in his address to the nation.

Some of my other post-quarantine political consumption has consisted of listening to my partner and her mother hurl swear words at the TV whenever Prime Minister Johnson speaks. Like Trump, he excels at skirting answers to important questions, saying whatever pops into his head, and constantly assuring the British public that it’s going to be OK. Just under 65,000 people in the U.K. have died from COVID-19 out of a population of roughly 67 million.

Despite the desire to spend the holidays with extended family, it’s definitely safer to hunker down with some comfort food, maybe a festive romcom and the person or people you live with, if you can tolerate them. The holidays will come around again, and they’ll probably be far happier if more people can survive this pandemic and celebrate with their families in the future.