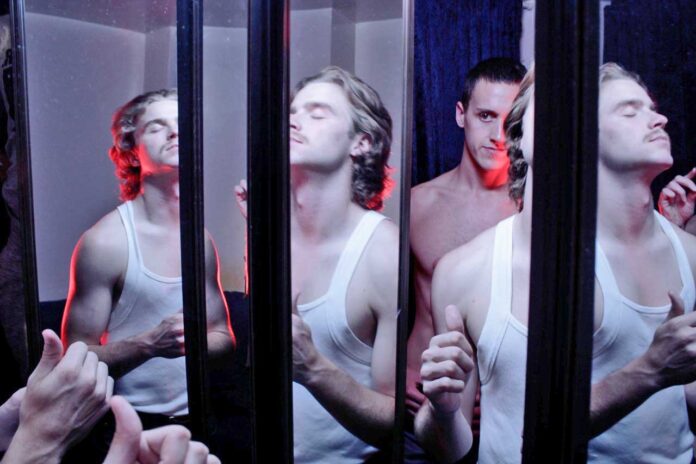 qFLIX, Philadelphia’s LGBTQ film festival, which was postponed in March, will take place online November 5 to 30 and screen numerous features and documentaries and, the programmers promise, “more shorts than any other fest.” Russell Tovey poetically narrates a terrific short called “Baby Lies Truthfully;” while Carol Kane narrates “Boys Don’t Wear Dresses,” a “fairy tale” about an autistic trans youth. The festival titles are still being confirmed, so things are subject to change, but more titles are being added. Here are some confirmed films from this year’s program.

One of the best entries at the festival is out gay writer/director Omar Zúñiga Hidalgo’s the “The Strong Ones.” Lucas (Samuel González) travels to the Chilean coastal town of Niebla to see his sister Catalina (Marcela Salinas) before he heads off to grad school in Montreal. But when Lucas meets Antonio (Antonio Altamirano), he gets involved in a hot and heavy affair. Their passionate kisses and longing glances are incredibly sexy. Moreover, the attractive actors are magnetic together. Their will-it-last? romance may be time-worn, bu t this sensitive drama is beautifully realized and superbly acted.

QFLIX has the Philadelphia premieres of four films — two features and two documentaries. “Keyboard Fantasies: The Beverly Glenn-Copeland Story” profiles the Philadelphia native Black trans musician as his music is rediscovered by a new legion of fans. Another performance-based documentary, “Bare,” has eleven nude dancers working on a production of choreographer Thierry Smit’s “Anima Ardens.”

The comedy-drama “Give or Take” where Martin (co-writer Jamie Effros) must manage his late, estranged father’s estate as well as his fathers’ lover (Norbert Leo Butz) who is living in the Cape Cod house Martin inherited. “SNL” alum Cheri Oteri co-stars as a real estate agent. The thriller “La Dosis,” from Argentina, depicts the personal and professional relationship between Marcos (Carlos Portaluppi), a nurse and the handsome, mysterious Gabriel (Ignacio Rogers) who begins work at the same clinic. The two discover they have something in common: they like to kill.

“Fall Back Down” is a fun, freewheeling, and sexually fluid Canadian comedy about Nick (Andrew Dunbar), an activist whose girlfriend Lizzie (Jacky Lai) leaves for overseas, while he takes a job in a sweatshop. When Nick and his coworker Reena (Aadila Dosani) discover something suspicious at their workplace, they become more intimate — just as Lizzie returns. “Fall Back Down” has a funky, anarchic energy and colorful supporting characters, including Nick’s lesbian sister, Althea (Dinah Lafleche), and punk musician Joe Keithley (of D.O.A.) in a cameo. Dunbar embraces Nick’s youthful exuberance and Dosani is a suitable foil for him.

Even if viewers did not attend high school in Albuquerque in the 1970s and 1980s, they will identify with the dozen-plus lesbians in trans filmmaker StormMiguel Florez’s wonderful documentary, “The Whistle.” The whistle of the title refers to the way lesbians (and some gay men) identified each other secretly, and the participants in this film fondly recall where they learned it as well as how they became aware of their sexuality. The community building shared by these women is empowering, as are the stories of a teacher who made a difference in their lives. There are affectionate recollections of sneaking into bars, but also somber discussions of fear and hate and rejection from families and the church. “The Whistle” is a touching and inspiring documentary.

“Rain Beau’s End” depicts the trials and tribulations of lesbian couple Hannah (Janelle Snow) and Jules (Amanda Powell) when they adapt a son, Beau. Beau (who is heard, but never seen in the film) is diagnosed with 47,XYY, a genetic condition, and acts out violently. His bad behavior escalates over the years, which strains Hannah and Jules’ relationship. Hannah is distant towards her son — like her homophobic father (Ed Asner) is to her — while Jules is both caring and frustrated. An outrageous third act twist oddly pulls the story together and tugs at the heartstrings. This modest film also features an amusing turn by Sean Young as Hannah’s best friend.

Three strong films screening at qFLIX delve into the world of pornography. Todd Verow’s latest drama, “Goodbye Seventies,” uses an interview with Vinny aka Marco (Ken Kaissar), to recall his career and that of director/star Brad Ford (Chris Rehmann), when they started making all-male adult — ahem, “art” — films in the 1970s. The pair have success with their debut, “A Night at the Everhard,” starring the aptly named Horse (Justin Ivan Brown) and Matt Bottoms (Andrew Cawley). This leads to more films, as well as various personal and professional struggles for cast and crew. Verow captures the porno milieu well on a microbudget with nice period clothes (when the characters wear clothes) and knowing details. “Goodbye Seventies” is also visually striking, with terrific flourishes, from superimposed imagery to snippets that pay homage to the films of the era. This is an enjoyable film from the veteran indie queer auteur.

Another documentary with adult content is, “The Blue Flower of Novalis,” which profiles Marcelo Diorio, a gay poet in São Paulo, who talks openly — and at length — about, well, his ass. Diorio is a fascinating, ingratiating subject. He is infectious while rambling about his family, musing about his HIV status, or participating in sex acts on camera. Vinagre showcases him extremely well, capturing his energy and essence with penetrating close-ups and interesting visual digressions.

QFlix is also offering the chance to see two films with Philadelphia connections that have played regionally in the past. “Latter Day Jew” is Philly native producer Todd Shotz’s amusing documentary about out gay comedian H. Alan Scott converting to Judaism. “Queer Genius” is local filmmaker Chet Catherine Pancake’s galvanizing documentary that profiles five queer female artists, including Rasheedah Phillips and Camae Ayewa (aka Moor Mother), who run a Black Quantum Futurism collective in North Philadelphia, and the late Barbara Hammer, among others.

The festival also provides attendees another chance to see (or re-watch) the outstanding Bolivian import, “Tu Me Manques,” by out gay director Rodrigo Bellot. This multi-layered drama about at-risk queer youth concerns a father (Oscar Martinez) coming to terms with the death — and possible suicide — of his gay son (played by three actors, Jose Duran, Ben Lukovski, and Quim del Rio). This film was a hit at the June PrideFLIX festival and should not be missed.

Another encore offering is “Tahara,” the sparse drama about Carrie (Madeline Grey DeFreece), a queer teen who gets involved in a love triangle of sorts during a service to commemorate a fellow student who committed suicide.

The Festival will have a closing night encore presentation of “Breaking Fast” with awards for out gay director Mike Mosallam and actor Haaz Sleiman who are expected to attend virtually — and possibly in person. This fabulous Ramadan rom-com stars Sleiman as Mo, a heartbroken gay Muslim who finds himself eating with Kal (Michael Cassidy), an actor he meets at a party. However, because he is practicing self-control during the Holy Month, Mo is unable at act on his attraction. Romance ensues.

Two other rescheduled from March events are the U.S. Premiere of out, gay actor, writer, and director Laurent Maria’s work, including his shorts, “Anita,” and “Sunday,” along with his latest feature, “Nina,” as well as a  program showcasing qFLIX favorite Ben Baur, who will receive the festival’s “Rising Star” award for the various short films and webseries he has written and starred in over the past few years. Both programs are expected to be virtual. [Full disclosure: I will be hosting these two events].