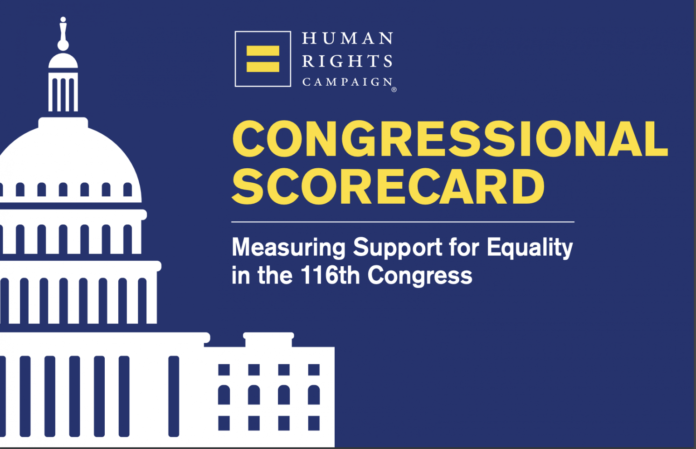 The civil rights group Human Rights Campaign is out with its scorecard for the current session of Congress, and its findings may force some lawmakers back to the blackboard, Bart Simpson-style, where they’ll have to scribble “I will do a better job of supporting LGBTQ Americans” over and over again.

“Over these last two years, Donald Trump and Mike Pence have remained relentless in their anti-equality attacks. From targeting LGBTQ people’s access to health care, to supporting discrimination against LGBTQ people in the workplace, to the appointment of extreme antiLGBTQ judges to the federal bench, this White House has redoubled their efforts to undermine our community’s progress,” the group’s president, Alphonso David, writes in the scorecard’s introduction.

The Republican-controlled U.S. Senate comes in for particular scrutiny in the new report card since the chamber is responsible for packing the federal bench with conservative jurists who have proven hostile to LGBTQ Americans.

David credits the majority-Democrat U.S. House, which passed legislation in May 2019 providing anti-discrimination protections to LGBTQ Americans. That bill remains mired in the Senate.

“The interwoven nature of LGBTQ equality with the progress of all communities demands leadership committed to advancing justice for all,” David wrote. “From working to increase public safety with the passage of long overdue gun background checks legislation, restoring the Voting Rights Act to ensure access at the ballot box, and guaranteeing Dreamers can stay in the only country they have ever known, pro-equality leaders in the House advanced crucial legislation for marginalized communities across the nation. And thanks to this pro-equality majority in the U.S. House, our elected champions were able to block legislation seeking to undermine our progress.”

The HRC’s scorecard grades the Senate on 15 different measures, including votes on President Donald Trump’s impeachment and the confirmation of U.S. Attorney General William Barr. The scorecard also takes into account support for such legislation as the anti-discrimination Equality Act and the John Lewis Voting Rights Advancement Act (which restored and revamped the original Voting Rights Act), along with confirmation votes for several federal judges.

U.S. Sen. Bob Casey, D-Pa., gets a 97 on the group’s scorecard, taking a ding for failing to line up with the HRC’s position on a bill rejiggering the Religious Freedom Restoration Act to clarify that religious freedom is fine as long as it doesn’t inflict harm on someone else.

Casey’s Republican colleague, U.S. Sen. Pat Toomey, got a straight goose egg for failing to support the Human Rights Campaign’s position on any issue — though one imagines that Toomey’s vote to acquit Trump during his impeachment trial would have been a deal-breaker alone.

Over on the other side of the Capitol, the HRC scorecard grades the 435-member U.S. House similarly for their votes and support for 15 measures. They include, once again, impeachment, the Equality Act, and the John Lewis Act. Votes on the reauthorization of the Violence Against Women Act and the Dream Act, the big immigration reform bill, also are included.

John L. Micek is the Editor-in-Chief of the Pennsylvania Capital-Star, where this article first appeared.