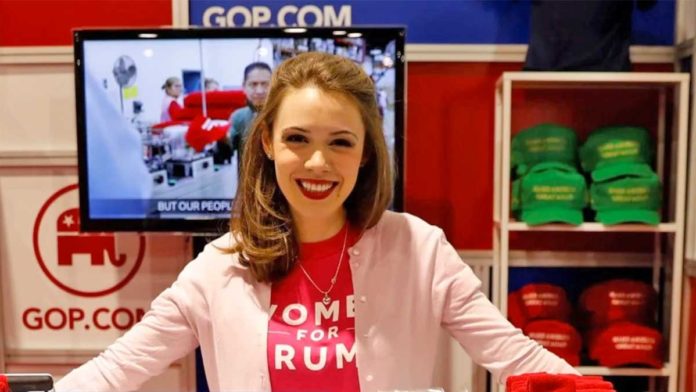 Merrit Corrigan is the new deputy White House liaison at the U.S. Agency for International Development (USAID). USAID is the world’s premier international development agency and drives development results internationally. The Fiscal Year 2019 President’s Budget for USAID is $39.3 billion. Corrigan has a long and troubling history of anti-LGBTQ statements. She has said that the U.S. is “in the clutches of a homo-empire” that pushes a “tyrannical LGBT agenda.”

Corrigan’s appointment had not been announced but was revealed by Pro-Publica, an independent news service, which reported her position on June 8.

At a time when the coronavirus pandemic is creating strong backlash and discrimination against LGBTQ people internationally, Corrigan’s appointment has been called a significant problem by others engaged in international aid.

Beirne Roose-Snyder, director of public policy at the Center for Health and Gender Equity, told Pro-Publica in a statement, “An appointee who eschews gender equality, meaningful democracy and LGBTI rights cannot possibly fulfill the mission of USAID.”

Corrigan has denounced liberal democracy, which is the foundational tenet of USAID, which uses the “liberal democracy index” in determining whether a country is self-reliant. “Liberal democracy is little more than a front for the war being waged against us by those who fundamentally despise not only our way of life, but life itself,” Corrigan wrote.

USAID has an office dedicated solely to gender equality and women’s empowerment and is engaged in equality action and empowerment for women and girls, globally. Corrigan has stated that the main positions of women should be as wife and mother.

USAID’s website also states that the agency “is working for a world in which LGBTI people are respected and able to live with dignity, free from discrimination, persecution, and violence.”

Corrigan’s biography on the USAID website states she is a “conservative political strategist.” She was on the payroll of the Republican National Committee (RNC) between 2016 and 2018, according to campaign finance records.

Corrigan previously worked for the Hungarian Embassy in the United States until mid-April. She has promoted far-right extremist Hungarian Prime Minister Viktor Orban in various writings and tweeted that Orban is “the shining champion of Western civilization.”

Orban has engaged in systematic attacks on LGBTI people, which have escalated in recent months. In May, Orban signed a law disallowing transgender and intersex people from changing their gender identities on legal and identity documents. The Council of Europe Human Rights Commissioner Dunja Mijatovic described Orban’s new law as a “blow to the human dignity of trans people.” She said it contradicted the case law of the European Court of Human Rights (ECHR).

In addition to Corrigan, the Trump administration has appointed Bethany Kozma as USAID’s new deputy chief of staff. Kozma was previously an anti-transgender activist who wrote in 2016 that transgender girls are boys “claiming gender confusion.” Kozma was formerly a senior adviser for women’s empowerment at USAID.

Kozma has publicly campaigned against transgender students being given the right to use bathrooms which match their gender identity since 2016 when President Obama released guidance to public schools on the issue. Obama’s directive has been rescinded by the Trump administration. Secretary of Education Betsy DeVos has adopted anti-trans policies with regard to students.

Kozma wrote about that change, “The silent majority must no longer be silent. With Trump, we now have a president who is focused on remedying the lawlessness of the prior administration.”

Acting USAID spokesperson Pooja Jhunjhunwala told Pro-Publica the agency has a “zero-tolerance policy of any form of discrimination or harassment based on gender, race, sexual orientation, religion or any other possible distinguishing characteristic that can define any of us.”

She said, “All employees are held to the highest of standards and are expected to treat one another with dignity and respect. Period. This includes political appointees, civil servants, foreign service officers and contractors.”

Duda said, “This is a foreign ideology that we won’t allow to be introduced into our country.” According to the president, LGBT rights and sex education seek to “penetrate into our reality, sometimes by force.”

Premier Mateusz Morawiecki also pledged to defend Poles from “ideological experiments.” Another Law and Justice official compared same-sex marriages to zoophilia. Law and Justice party lawmaker Tomasz Rzymkowski said Poland faced a “civilizational choice.” He also posted a cartoon on social media comparing gay marriage to that of a man and a goat.

Poland ranks worst in the EU for LGBT rights, according to the international advocacy group ILGA.

ILGA said last month that a number of European governments, including Poland’s, have “used the pandemic as an excuse to make aggressive moves” against the LGBT community.

According to ILGA, Russian President Vladimir Putin is agitating for a referendum to strengthen the country’s ban on gay marriage, with anti-LGBT propaganda. Conservative Slovak lawmakers also rejected a report of the country’s human rights ombudsman, saying it was too focused on gay issues and light on religious freedom.

Poland’s Law and Justice leader Jaroslaw Kaczynski said in 2019 that “the gay lobby” was “seeking to change the Polish way of life.” More than 80 Polish municipalities declared themselves “LGBT-free zones.”

The European Commission asked Poland for an explanation regarding the contested areas in May. Declaring territories or workplaces unwelcome for select citizens goes “against the values set out in the EU treaty,” the commission said.