Rising star Justice Smith (“Pokemon: Detective Pikachu”) just came out alongside his boyfriend, actor Nicholas Ashe (“Queen Sugar”), over social media, just in time for Pride Month. They’re adorable together — an Instagram picture of them brushing their teeth side by side is the sweetest thing, truly — and since Smith’s statement on the matter included the perfectly composed and forthright, “…if your revolution does not include Black Queer voices, it is anti-black,” it’s just all the more satisfying. Smith also has some career news, some cinematic content coming down the road. First, a psychological thriller called “The Voyeurs.” Then a high school dramedy about kids exploring their sexuality titled “Generation.” And a little indie feature co-starring Chris Pratt called “Jurassic World: Dominion.” Now, there was a time when an up-and-comer would be forbidden from even thinking about joining a blockbuster mega-franchise and then risking it all by coming out of the closet. But that was five minutes ago; the kids are doing whatever they damn well please now. Isn’t it great?

Betty Cooper is bisexuali. Well, OK, it’s actually Lili Reinhart, who plays Betty on “Riverdale” — and who, lest we forget, also lit up the screen in the super femme crime hit “Hustlers” — that just went public about being bisexual. We love it when this sort of thing happens, because the B in LGBT is too often overlooked, and we’re always thrilled when charming young celebrities casually drop that information into the world. We especially like it when they do it in the publicity run-up to a new movie, chipping away at the old Hollywood system where actors would, once upon a time, conveniently pair up with an opposite-sex love interest around the time their film was due to take its bow. The movie Reinhart’s got coming up is called “Chemical Hearts,” from director Richard Tanne (“Southside With You”), and it’s about a disabled teen journalist who finds love working on the school newspaper. Based on the novel “Our Chemical Hearts” by Krystal Sutherland, the film co-stars Austin Abrams (“Euphoria”) as the boy who earns his place in her emotional chem lab. If the movie theaters are in full swing again by late August, you’ll get to see this one there. Otherwise, check for streaming options.

Charlize Theron became an action star when you weren’t noticing. From “Mad Max: Fury Road” to “Atomic Blonde” (and its upcoming sequel) to the “Fast and Furious” franchise, she’s pretty much out-Neesoning Liam Neeson, and we’re really into it. For her next one, she jumps and kicks her way into Gina Prince-Bythewood’s (“Beyond the Lights”) newest, “The Old Guard.” Theron plays an immortal mercenary who leads a team of similarly gifted never-dying warriors to protect humanity, all the while confronted by villains who’d corrupt their ancient ways. The film is based on the graphic novel by Greg Rucka and features Chiwetel Ejiofor, Matthias Schoenaerts and KiKi Layne (“If Beale Street Could Talk”). But here’s the bonus: a same-sex romance — one that’s been hot for centuries — between two members of the team, played by international actors Luca Marinelli and Marwan Kenzari. We’ll take it, the delicious queer icing on Theron’s Furiosa cake, when it drops on Netflix July 10.

“Queen of The Capital” will serve, slay and stream

Daniel Hays has two jobs. By day, he’s with the U.S. Department of Labor, working for the government and leaving his 36-inch-high wig at home. At night, Hays’ drag character, a Southern Christian named Muffy Blake Stephyns, takes over, and she works on a different sort of Washington, D.C., campaign: the competition for the title of “Empress IV” of the Imperial Court.  Don’t know what that even means? Well, then, you’ll want to see the new documentary, “Queen of The Capital,” from director Josh Davidsburg. The film is both a drag documentary and one that explores the old-school, community-building work of gay bars via classic drag performance and fundraising, all of it aligned with a camp fantasy of royalty. It premiered earlier this year at Slamdance 2020 and will be arriving in arthouse theaters this summer as well as taking a queenly bow on June 20 via streaming. If you’re going to brave a cinema, then here’s a reason to go.

Romeo San Vicente is ready to stay far away from you all summer. 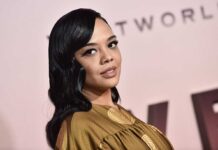 Deep Inside Hollywood: Tessa Thompson will bring “Church Ladies” to the screen 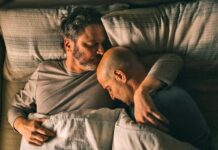