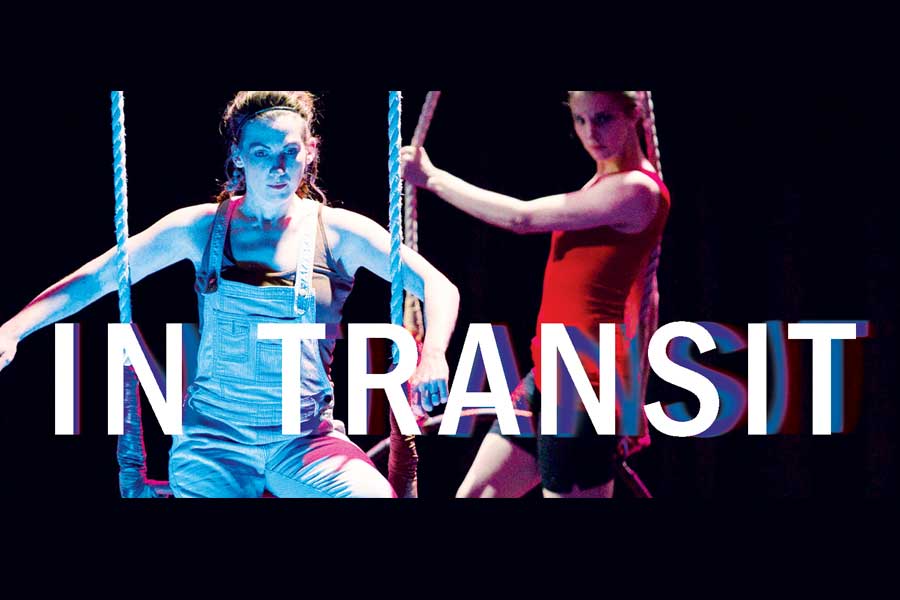 For the many-flexed performers of Tangle Movement Arts, next week’s Fringe spectacle will be somewhat of a déjà flew.

In previous Fringe Festivals, the aerial acrobats pushed the envelope by taking their daring acts outdoors and under bridges. This time, the group will return to form by taking flight inside a theater.

“Last year, we made a completely immersive show where we put the audience at the center and staged the performance around them in a circle,” said Lauren Rile Smith, a poet and performer who founded Tangle eight years ago. “This year, we are swinging back to a classic theatrical narrative. We wanted to get back to the discipline of the form and follow these characters through their lives.”

The traditional setting won’t stifle the movement of this all-female, queer-themed troupe. For its ninth consecutive Fringe performance, the circus-arts company will put a queer spin on something most Philadelphians do every weekday: commute on SEPTA.

“Tangle likes to dramatize the ordinary rhythms of life in Philadelphia with the dramatic movements of circus arts and a hefty dose of queer romance,” said Smith.

And while many commuters wouldn’t describe taking the bus or subway as particularly romantic, Smith noted the poetry of a routine that exploits the democracy of public life.

“No matter where we’re coming from or going to, when we get on the bus we all move in the same way, pay the same fare, deal with the same bad weather or the same beautiful surprises, like a busking musician or a long-lost friend. We all use the same gestures or turns of phrase to navigate that in-between space that is transit.”

Hence, “In Transit” will display the beauty and the frustration of the everyday trudge to and from work — which, for the Tangle acrobats, is art imitating sans-trapeze life, as one of the performers could attest from her experience just last week.

“She got stuck on an unfamiliar line in Trenton and a massive summer thunderstorm broke out,” Smith relayed. “She was stuck underneath the train station with sheets of water coming down, which actually happens to her in the show, so I said to her, ‘Use it for your art!’”

Indeed, such basic moments offer solidarity and humor, in addition to frustration — but they’re hardly boring when aerial acrobats are interpreting them.

“This is a place where we find the nitty-gritty of ordinary life, and so it’s been a fun and inspiring challenge to infuse that with the beauty of circus arts and queer storytelling of interpersonal relationships,” said Smith.

To accurately portray the urban commute, “In Transit” is augmenting the usual circus-arts spectacle with other art forms to mimic the sights and sounds of public transportation. These elements include puppetry and a collaborator from New York City in the role of a busking street musician, in addition to Tangle’s trapeze magic.

“What I love about the interdisciplinary aspect of our art form is that there is always a new direction to explore and grow in,” said Smith. “We keep things fresh for ourselves and our audiences by exploring different nooks and crannies every time.”

For the Tangle founder, that exploration last spring included flying on a trapeze while pregnant. (She’s taking a breather for this year’s Fringe.)

“We’re really excited about those rich, deep relationships that we get to play out on stage with queer romance as the backbone, whether it’s a crush on your barista or an ex who spurns you in public. Our lives are brought together in this in-between public space of transit.”