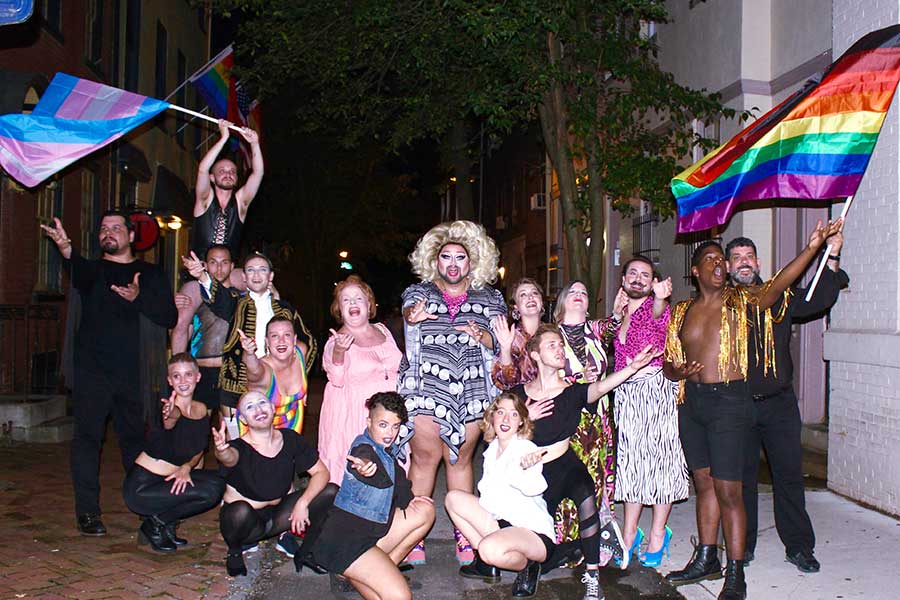 If just one word were required to describe Eric Jaffe? Fun.

The born-and-raised Philadelphian has been a regular on the local drag circuit for about two years and is world-renowned for his ukulele skills. Years before, he was known on the cabaret scene.

Jaffe’s newest scene is writing and directing, and he’ll debut “Gay Mis” — his original musical parody — as part of the annual Fringe Festival.

Obviously a riff on “Les Misérables,” the piece is actually Jaffe’s second parody musical. His first, “Thweeney,” a take on Sweeney Todd, made its successful debut last January.

The genesis of “Gay Mis” was a bit convoluted, Jaffe said.

“I didn’t like ‘Les Mis’ at first, because I didn’t understand it at first — not at all,” he confessed. “I was in the eighth grade when I first saw it. I saw it again a few years later with a professional touring company, and I picked up on a few things but not a lot. Then I started listening to it repeatedly, because I loved the music, and I started to absorb some things. But it wasn’t until I saw the movie that I figured it out.”

Jaffe admitted he still finds parts of the famed musical ridiculous, adding his show will highlight what he adores and finds absurd about it.

“Also, as with all the shows I do, I wanted to make spaces for all kinds of queerness,” he said.

Jaffe’s focus on queerness extended past the show: He cast a wide net to secure queer performers. As a result, “Gay Mis” features collaborators with whom he previously worked, along with newcomers.

Brennan Malone, a self-described “Jaffe alumnus,” snagged the role of “Parmesan,” the Jean Valjean equivalent. He said it caught him by surprise when Jaffe offered him the role.

“I had never played the lead in a show before,” Malone said. “I never thought I would get to play a Jean Valjean role. I was used to playing the best friend or some such.”

The protégé has nothing but praise for Jaffe’s creative process — and said he’s also having a damned good time working with his mentor.

“Sometimes we have to stay as close to the script as possible, but sometimes we just crack each other up with the ideas we throw out,” said Malone.

Cast member Kathy Babe Robinson is working with Jaffe for the first time, though she’d parodied “Les Mis” in her own cabaret show. She said she arrived at the audition with some of her original material in hand and was cast within 24 hours.

“I am having the time of my life,” said Robinson. “The cast is just so funny and so talented. And Eric has provided us with such a safe space to be ourselves. There’s a little bit of everybody in this show.”

Jaffe said the unexpected success of “Thweeney” and optimistic prospects for “Gay Mis” have him planning the creation of his own gay-theater company.

“One of my goals in building a real theater company is to provide a space for older gay theater artists,” he noted. “You don’t often see older queer theater artists in the theatrical nightlife, and there are so many amazing people that have so much to offer that I want to bring into the fold.”

“Gay Mis” will be performed at Franky Bradley’s, a venue Jaffe praises: “They’ve got a great stage, great lights and they make us feel very welcome.”

And while “Gay Mis” also will take the stage for one night at Fishtown’s Punch Line Philly, the auteur said the Gayborhood location of Franky Bradley’s is significant for the longer run of the show.

“I want to be as accessible to queer people as possible,” Jaffe said, “so why not perform where most of them live and play?”