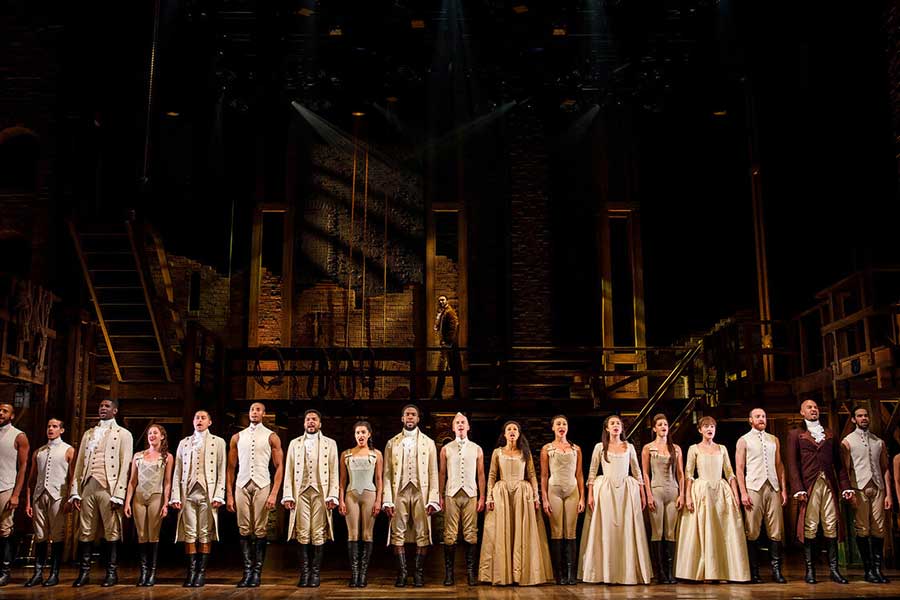 Everyone in Philly knows Lin-Manuel Miranda’s Tony Award-winning “Hamilton” is in town. Nearly every block in Center City bears the banner; nearly every shop displays the signage.

And while most theater-lovers are familiar with its hip-hop patois, multicultural characterizations and celebrity performers like Miranda, Daveed Diggs and Philadelphia’s own Leslie Odom Jr., the touring cast at large has remained far less elusive.

Avery Sobczak, a Colorado native, performs one of the musical’s most crucial roles: the Swing — the actor and dancer covering all six men in the ensemble cast, including the characters of Charles Lee, Samuel Seabury, George Eacker and James Reynolds. Alexander Hamilton and Aaron Burr are the glittering front faces of Hamilton’s American Revolution, but you don’t get through history — or this show — without its supporting cast.

The out Sobczak spoke to PGN the night before Philly’s Aug. 27 opening of “Hamilton” at the Forrest Theatre.

AS: At the end of high school. I was pretty lucky my mom’s older sister identifies as a lesbian, so it wasn’t an issue with my family. The summer between high school and college is when it all changed for me.

PGN: I know you attended Ithaca College for Musical Theatre. What was your theater background before “Hamilton”?

AS: I moved to New York City four years ago, where I’ve been working regionally and Off Broadway. The coolest thing I’ve done is worked with a group called Jennifer Jancuska and The BringAbout. It’s a group of artists that work together to workshop new musicals. The workshops, called ASTIR, completely stage a couple of numbers to aid the creative process for the team attached to the show. Recently, a fully realized new musical adaptation of “Anne of Green Gables” went up at Finger Lakes Musical Theatre Festival, which started as one of The BringAbout workshops. I love to be a part of new stuff from the ground up.

PGN: Are you a big hip-hop fan?

AS: I am! I grew up on Dr. Dre and Eminem. Now I listen to a lot of women rappers — they are fierce. Big fan of Lil’ Kim, Nicki Minaj, Cardi B, Leikeli47. Also Chance the Rapper [a male] is pretty amazing.

PGN: What are the parallels between hip-hop and Hamilton’s life?

AS: I always associate Hamilton’s song “My Shot” with “Lose Yourself” by Eminem. I used to listen to it before auditions to get in the zone. I feel like both these songs have a relatable struggle of not throwing away your one chance to succeed and lay the foundation for your future. I feel like Hamilton’s life really fits with the music that tells his story. Many rappers have at least one song in their repertoire that has a rags-to-riches moment. That’s basically what the story is boiled down to in its simplest form.

PGN: The Swing is essential to any show, as you are covering several characters’ ground. How do you make your character yours as opposed to any other actor who has portrayed it?

AS: This is a tricky question. Since I am not the original cast, I am replacing other people who created the tracks in the show. So, there isn’t much leeway with what you can do when you have to hit a certain mark or a step has to be executed in a certain way. During improvisational moments, you can let your own essence shine through in your own movement that’s specific to your own body. Also the way a person interprets the lyrics and choreography is already singular. I feel like they look for that during the audition process.

PGN: Have you spoken to Lin-Manuel Miranda? If so, what was it like?

AS: Lin saw the show when we were in Detroit. I was lucky enough to be on as Charles Lee. He met with the cast at a bar afterwards. He was incredibly inspiring. It always helps to gain perspective on why we do what we do in the show and how much it really does mean to an audience. It’s always a great reminder to never lose perspective and to continue to do your best when you may not feel your best. He really is an awesome guy.

PGN: You’re in Philadelphia now — one of the most prominent homes to the real-life Hamilton. Does it offer any context?

AS: I’m really excited to visit the sight where Hamilton’s home was, Independence Hall and the original post office. It’s always exciting to visit the actual places where these people lived and thrived. He had such a hand in the financial structure of this country. It’ll be very informative to see and be in some of the places where it all started.

PGN: So much has been said — debated, even — about Hamilton. What should future audiences know about the show?

AS: The show is fast-paced so it is a good idea, coming into the show, knowing some of the music or the gist of Hamilton’s life. Audiences should come with an open mind and an open heart. They are about to see the life of one of the most underrated founding fathers played out before their eyes with an incredibly diverse group of humans telling it. The message the show delivers is strong, demanding equality and acceptance from its audience members. It really is such an important message, especially right now, going into this next election. It feels important to tell this story and be able to tell it to so many people across the country.