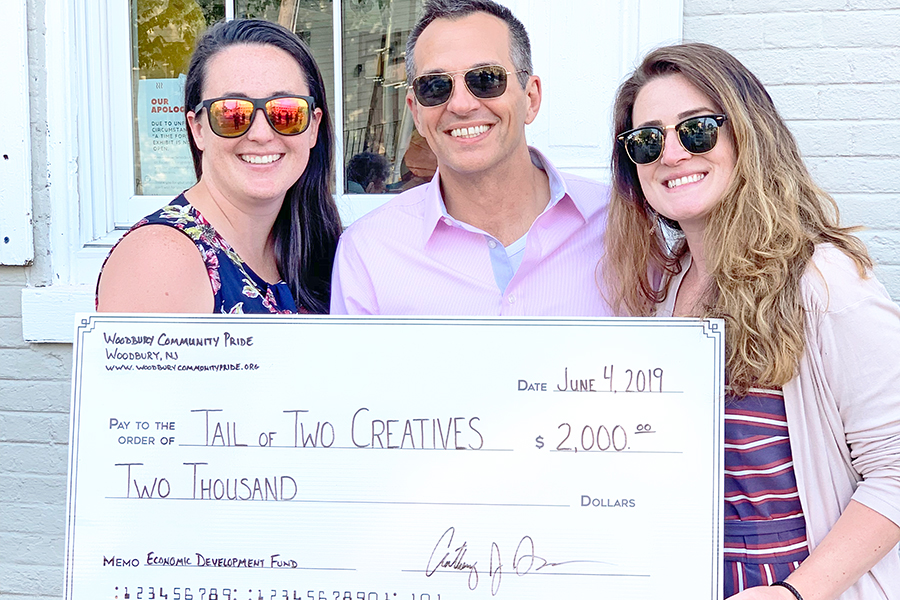 A 25-minute drive south on Interstate 676 — traffic-permitting — sits Woodbury, New Jersey, a suburb of 10,000, possibly on the brink of an LGBTQ-plus business boom, at least, if community leader Tony Doran has anything to do with it.

The State of New Jersey first set the stage for economic growth in 2017 when they made Woodbury home to one of 75 designated Opportunity Zones, low-income areas where private investors were incentivized to develop. Revitalization was on the horizon.

In October 2018, the city of Woodbury became one of three in the state of New Jersey to score a perfect 100 on the Human Rights Campaign’s Municipal Equality Index, an elusive ranking that reflects the level of inclusivity that Woodbury’s laws, policies and services offer to LGBTQ people working and living in the city.

The rating came after Doran began collaborating with the city via his organization, Woodbury Community Pride (WCP).

A 4th-generation Woodbury native, Doran first conceived WCP after coming back home. Leaving 25 years of city living to return to the ‘burbs, Doran realized his hometown lacked the LGBTQ community and legislative protections he’d so valued in his urban life.

“In big cities like [Washington] D.C. and Philadelphia progressive policies are pretty much a given,” said Doran. “Coming home to Woodbury, it didn’t take long to realize nothing like that existed here. It was almost a reminder of why I left. And I thought, why should we be forced to move to be around our community? We should be able to be who we are, where we are.” said Doran.

With an MBA from Rutgers and professional credits that include the chamber of congress of Great Philadelphia, Doran felt he could create change through the private sector. In 2017, he incorporated WCP, a volunteer organization committed to making Woodbury a welcoming home for LGBTQ small businesses.

“A significant percentage of LGBTQ-plus businesses are in the professional services, consulting and marketing sectors. Technology today allows them to operate from anywhere — why not a small town where the cost of doing business is more affordable? And let’s face it: a lot of small towns need a boost to their local economy,” said Doran.

Roberts said the funds will go toward opening a brick-and-mortar shop within one of the city’s recently-restored historic properties, repurposed as a co-creating space.

“We love that our [new] office is in a creative space. We’ll be working alongside many other creative folks,” said Roberts. “It gives us the opportunity to elevate our professionalism by welcoming in clients for meetings, hosting workshops, etc.”

Tail of Two Creatives — the name’s homophone a shout-out to the couple’s two Australian Shepherd rescues — is a pioneer of Woodbury’s LGBTQ business development.

“There aren’t many of us here… yet,” said Roberts. “We’re hoping that our visibility attracts more.”

The couple, fans of WCP’s mission, who offered to design Doran’s website pro-bono, believes that the WCP’s actions will continue to grow Woodbury’s LGBTQ business inclusivity.

“They [WCP] are being innovative in their approach to the next leg in the journey for full LGBTQ-plus equality — economic equality,” said Roberts. “WCP recently launched their Welcoming Business Program, where every business can take a pledge affirming their commitment to welcoming LGBTQ-plus people as customers, guests, clients and employees.”

WCP has also worked with the City of Woodbury to implement policies that increase the safety of its LGBTQ residents.

“For example, there are now two LGBTQ-plus liaisons at Woodbury Police Department,” said Roberts. “Actions speak louder than words when it comes to equality — and Woodbury delivers.”