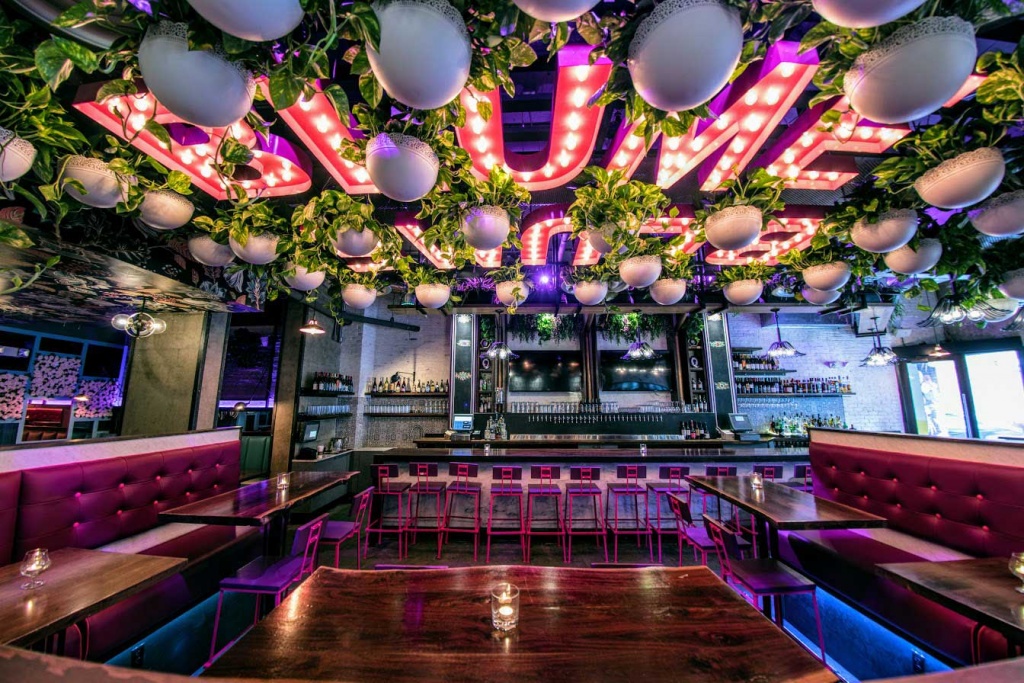 A vibrant and colorful addition to the Rittenhouse neighborhood, Blume offers  a feast for the senses the minute you step through the door.

The bar/restaurant has a striking decor that overflows with plants, moody neonpink lighting, psychedelic butterfly artistic motifs and youthful energy. As a result, the tables on a weeknight are packed with those who presumably have ever owned a pair of yoga pants, a henna tattoo kit or a Mariah Carey album.

The bar menu boasts a nice selection of local beers and wines. The food menu seems to have the modus operandi of taking classic items and finding unique and bold ways to twist the familiar.

The best example of this are the deviled eggs ($6), which have a healthy portion of lobster meat and roe sunk into the filling — and it’s the best thing ever. Blume found the perfect place to add lobster, unlike many new establishments that sink it into mac and cheese where its subtle flavor and texture almost always get lost.

Vegetarians can delight in the blistered shishitos and green beans ($10), a dish that works well enough on its own but can be amped up by the chili sauce and soy miso aoli served on the side. The Kung Pao calamari ($12) takes a familiar seafood starter and gives it a complex makeover with peanuts, chilis and a sweet glaze.

Blume’s formula works, for the most part, but in one instance instead of reinventing a dish, the chef created something completely different.

The bahn mi sandwich ($12), while tasty, barely feels like a bahn mi because Korean fried chicken with a thick and sweet glaze was substituted as the main protein. While it plays well with the jalapeños on the sandwich, it overpowers the crispness and flavor of the vegetables and the cilantro that would normally shine with a traditional protein like juicy, thinly sliced beef or pork. So, while delicious, it feels more like you are eating a General Tso’s chicken sandwich that a bahn mi. It’s a small nitpicky issue but significant all the same.

Blume seems well on its way to becoming a hot spot in the Rittenhouse area, and after sampling the drink and food menus, we can understand why. The aesthetic, along with a pleasing selection of libations and noshes, makes the venue stand out in such a competitive part of the city.