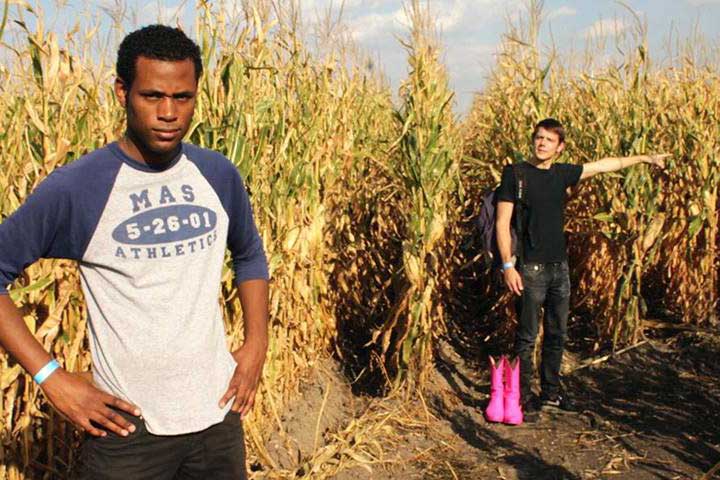 When Nathan Manske and his compatriots began their road trip on Sept. 4, 2010, they didn’t know exactly what to expect. They only knew there were people to meet and stories to record.

Now, after eight years, Manske and his people have put together a touring retrospective exhibit that explains its origins, highlights some of the people and locales visited and displays some artifacts and anecdotes accumulated from the journey.

“I was inspired to create ‘I’m From Driftwood’ after seeing a photograph of Harvey Milk, one of the first openly gay elected officials in the United States, riding on the hood of a car and holding a sign that read, ‘I’m From Woodmere, N.Y.’ The sign showed just how far people came to attend the 1978 San Francisco Gay Pride march, but it meant something more to me: It meant that there are lesbian, gay, bisexual, transgender and queer people in every small town and every big city across America and the world,” said Mankse. “I was thinking about that photo the morning after watching ‘Milk,’ the biopic of Harvey Milk written by Dustin Lance Black. Harvey’s from Woodmere, New York; I’m from Driftwood, Texas.”

To that end, Manske managed to accumulate more than 10,000 photos, over 30 hours of audio recordings and a large array of video interviews. The exhibit has representative samplings of all of this.

A large map detailing the routes the group took on each leg of their journey is included. The original tour was done in four legs, and in order to achieve their 50-state deal, sometimes the group had to cover thousands of miles in the course of a week.

A kind of gay travelogue, the exhibit was displayed in the ballroom of the William Way LGBT Community Center for a one-night-only showing.

Perhaps the most interesting artifacts on display were the pink cowboy boots. Early on, Manske wanted to find something that would serve as a symbolic identifier for the tour. He settled on the boots as both something whimsically gay, and appropriately symbolic of the LGBT American stories being recorded.

The boots became the tour’s unofficial mascot, and the group made a point of taking a photograph with them wherever they stopped.

The “I’m from Driftwood” tour hopes to publicize the ongoing archival and historical work of the project.

For the entire story and video archive, visit imfromdriftwood.com.