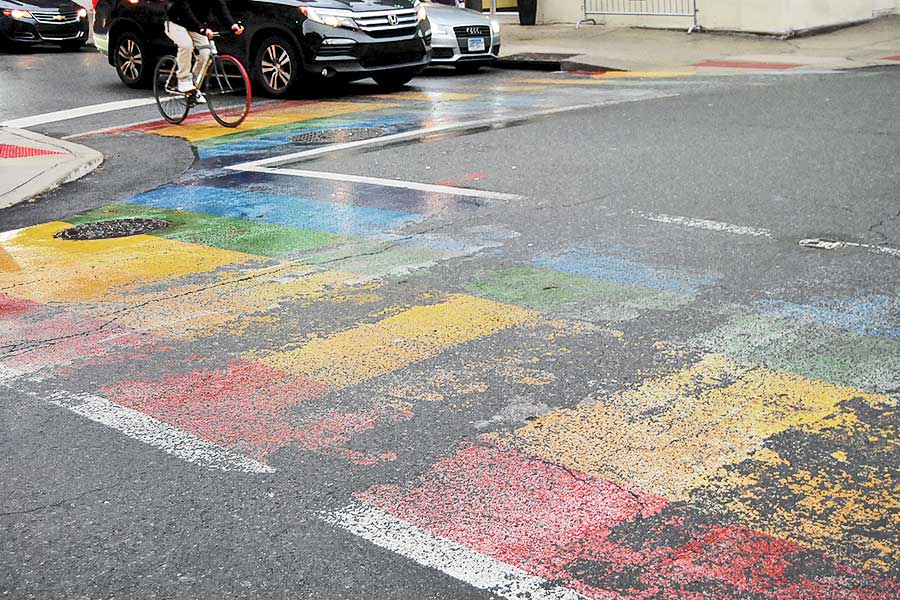 There’s a petition to recognize the LGBT community by repainting the Walt Whitman Bridge in rainbow colors in honor of its namesake’s 200th birthday.

Meanwhile, the rainbows painted onto an intersection of the Gayborhood are fading, with no plan to refresh their stripes.

The four rainbow crosswalks at 13th and Locust streets have given way to four years of heavy traffic, repairs and at least three Pride parades.

Those seeking to preserve the colors of the community want to know: Who is in charge of preserving the crosswalks?

The questions inevitably fall to Philly Pride Presents executive director Franny Price, who spearheaded the project with the help of the Streets Department. The project was paid for with $15,000 of unused funds left over from that winter’s snow clean-up budget, but regular upkeep was never part of the conversation.

“I didn’t know that we would be forever responsible for maintaining it,” said Price. “We just got it done the first time and hoped members of the community would help to get it maintained.”

The crosswalks were always meant to be temporary, a way to mark the 50th anniversary of the Annual Reminders, the nation’s first demonstration for gay and lesbian rights that happened at Independence Hall in Philadelphia.

The 2015 project was a huge success, nabbing national headlines for the City of Brotherly Love and gathering likes on Instagram. The rainbows were painted with regular street paint, which began to fade and crack after only a week, thus beginning a conversation about how to create a more-permanent design.

Price said the answer is in a report put together by the Streets Department in 2015 that details how other cities, such as San Francisco, Seattle and Los Angeles, have been able to maintain their rainbow crosswalks.

The consensus is to follow in the footsteps of West Hollywood and use a more-durable material called Thermoplastic, which involves digging up the street and filling it in with colorful concrete. But it’s expensive, at $26,000 per intersection, and there’s been little interest in funding it.

One private citizen reached out to Price unsolicited last summer about repainting it as a tribute to his friend who had recently died. He fell off the radar after she detailed the cost and procedure, and she hasn’t had the time or resources to pursue other options.

“It’s just not a priority for us right now. We have to raise money for our events,” she said, adding she may be willing to reopen the discussion after Pride — especially if she has help. “Maybe we can start a roundtable discussion with the community to see if there’s something we can do.”

But that also spurs her to bring up a deeper question: With such little interest, is a rainbow crosswalk something the community actually wants right now? And more importantly, is it something it needs.

“There are so many other things to focus on, like homeless shelters for LGBTQ youth,” she said, noting an email she received recently from a 19 year old who was kicked out of his mother’s house for being gay.

“If a kid is homeless, we can’t just take them to the crosswalks,” she said. “We need to have a safe place to put them. It would be nice to have the crosswalk — and it was really cool when it happened — but right now maybe we need other things in our community.” n