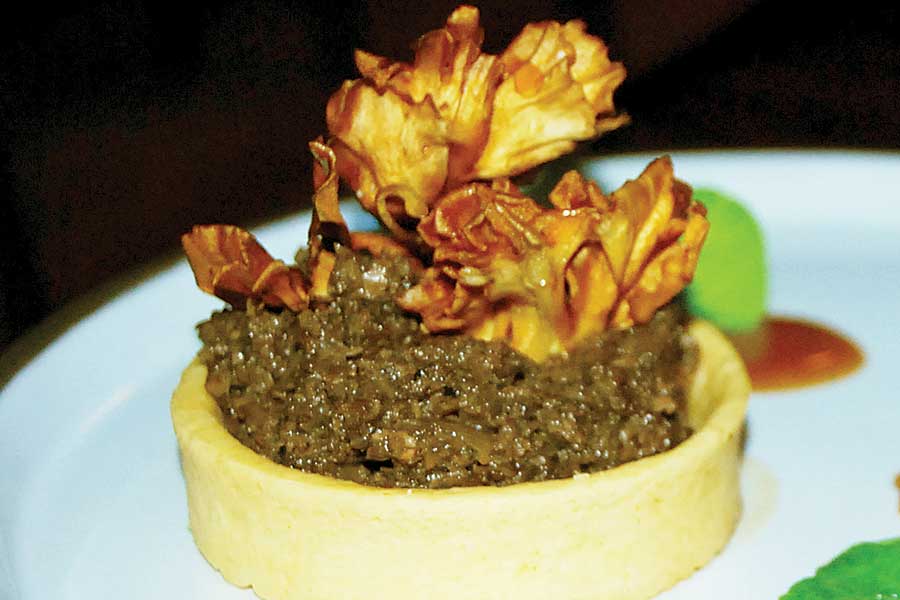 Chef Tim Lanza, the former head chef and creative talent behind the amazingly innovative menus at Marigold Kitchen, has taken his culinary game into Center City for his latest venture, Talk.

The locale at first seems like a challenge, located on that stretch of Walnut Street is where the urban bucolic charm of Rittenhouse starts morphing into the frantic, traffic and construction-heavy cattle chute launching commuters onto the Schuykill Expressway or into University City. A place like Talk deserves to be closer to Rittenhouse Square, but that doesn’t seem to deter the healthy number of patrons and locals who packed the place on a steamy weeknight just after rush hour.

The aesthetic is tasteful art deco. Who doesn’t like a good Gatsby-inspired night on the town?  And the fact that all the duos featured in the artwork are same-sex didn’t go unnoticed either. Well played, Talk, well played.

The New American menu offers a robust number of small plates and a handful of entrée-sized offerings, all with the same playfulness and visual flair people familiar with Marigold Kitchen would expect. The light and thinly sliced fluke crudo ($13) holds the mid-range of the flavor profile steady while the sweetness of the watermelon plays off the sea salt, spicy chili and fragrant borage that take up the other end of the flavor spectrum.

The savory éclairs ($9) look the part of the sticky pastry you know and love, but the sweet creaminess you expect is supplanted in fine fashion by a chicken-liver mousse whose richness is delightfully cut with a sour-cherry glaze generously coating the light pastry.

The mushrooms ($13) are a nice dichotomy, serving up the star of the dish two ways — as a tart and a taurine. The tart is warm, dense and earthy in texture and flavor, while the taurine goes in the opposite direction as a cool, creamy and light experience on the palette.

The Yakitori quail ($16) is another visual stunner. The perfectly roasted petite, elegant bird in its Asian-seasoned glory is the centerpiece of the dish, but the bed of Napa cabbage slaw, sweetened and brightened with gooseberry and plum, almost steals its thunder. And you kind of feel like a flesh-hungry giant on the rampage while tearing into such a tiny roasted bird. Fee-fi-fo …yum!

The one entrée we sampled lacked in colorful panache relative to the small plates we enjoyed, but still delivered a perfectly executed and comforting dish. The black-pepper pasta ($20) was everything your nutritionist or personal trainer warned you against. It’s cheesy and buttery without being too showy with its underlying decadence. The almost-hidden figs and prosciutto give the plate just enough sweet and saltiness to elevate its charms of the dish into something special.

There is a lot of culinary talent and visual feasting within the walls of Talk to pique Philly’s interests. If you are looking for a glamourous escape from the hustle and bustle of Rittenhouse and Walnut Street, put on your snazziest eveningwear and strike up a conversation over dinner at Talk.