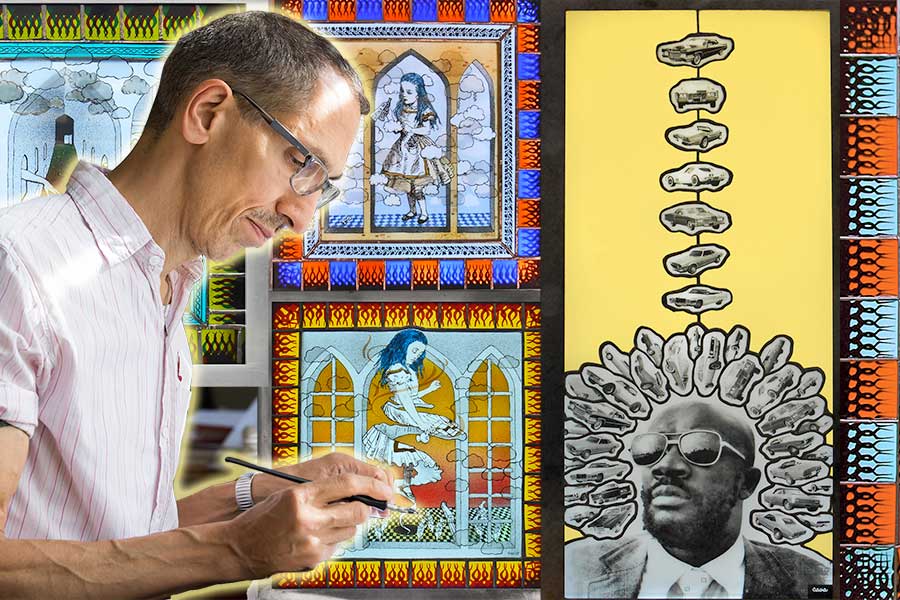 Sometimes you need a change of scenery to create changes in scenery.

Out glass artist Joseph Cavalieri, is in the midst of a 10-week residency at the GoggleWorks Center in Reading, where he is creating his latest series called “Disenchanted Alice,” a collection of six stained-glass panels based on the illustrations of Lewis Carroll’s “Alice in Wonderland.”

in 2010, Cavalieri founded CAVAglass, a glass studio in Mahattan’s East Village, to create unique glass art using medieval methods as well as teach classes. His work can be seen in the permanent collections in New York City at the Museum of Arts and Design, the Italian American Museum and the Stax Museum, and in Our Lady of Sorrow Church in Itaparica, Brazil.

Cavalieri already has artwork on view at GoggleWorks, but once this current series is finished, it will be presented as an exhibition Aug. 10-27 at the Schmidt Gallery. The works blend the reverent imagery of stained-glass cathedral windows with images and themes from underground comics and cartoons. The result is somewhat dark and twisted, with amazingly intricate and visually arresting artistry and craftsmanship at its core.

“The influences are things I grew up with and artists I still enjoy, especially comics,” Cavalieri said of his inspirations for these pieces he’s currently working on. “I love ‘The Simpsons’ and I’ve killed off some of them in my glassworks. I’ve actually sold some of my works to writers of ‘The Simpsons.’”

The general public has an appreciation for comics and for stained glass, Cavalieri said, but never gets to see the two in the same place.

“I like mixing the background of a very historic, traditional technique that people feel is so religious, alongside comics, which is the opposite. I bring humor and surprise into the artwork.”

Cavalieri said he prefers to let viewers interpret his work in their own ways.

“When I’m designing a piece, I’ll base it on a story,” he said. “That’s why I’m basing this on ‘Alice in Wonderland.’ She’s disenchanted. She’s living in New York in 2018. Within the artwork itself, I’ll put clues to that story. When people see the artwork in person, they might see some of the story that I intentionally wanted to show them within the artwork. Stained glass is beautiful. It’s backlit. It’s very emotional with the colors. So there’ll be little clues within it, and viewers might put together a story or a lot of times they’ll make up their own story, which is even better.”

Cavalieri is often on the road, most recently in Argentina, Seattle and Pittsburgh to display and teach glassworks. But he said that spending 10 weeks in residency in the slower-paced and bucolic-by-comparison confines of Reading gave him the freedom to indulge in the grand ideas and the painstaking artistic processes he’s been wanting to bring to fruition for a while.

“It’s time away from my studio in New York where I can concentrate on my work more seriously, I don’t have the distractions that I have there,” he said. “Not that my boyfriend is a distraction, or my friends there or my family. But doing laundry and going out, all these things get in the way of doing work. I came up with this project a year ago. When I got the call telling me I got the residency, I thought, Oh my God, I can finally do this project because I wanted to concentrate on making about six pieces in this series. So if I was doing that at home in my studio in New York, it would take a lot longer. Now I have a timeline and a schedule and an exhibit at the very end of the residency, so I know I have to finish on time. I know I work well in those circumstances.”

How has Reading itself affected his work?

“I came here with designs already finished, so I was doing the production here,” he said. “It has affected my state of being, which is a lot more healthy than New York. In New York, there are a thousand things to do. Here, there’s 10 things to do. But it’s a challenge. I found a local theater that does musicals. I discovered the gay and lesbian community center. Reading has made me produce more work. I have a really nice schedule. It’s a lot simpler, and I have more time for my work here. It’s a good atmosphere. I don’t mind that there isn’t a Starbucks close by. It’s the opposite of New York City — and I like that.”