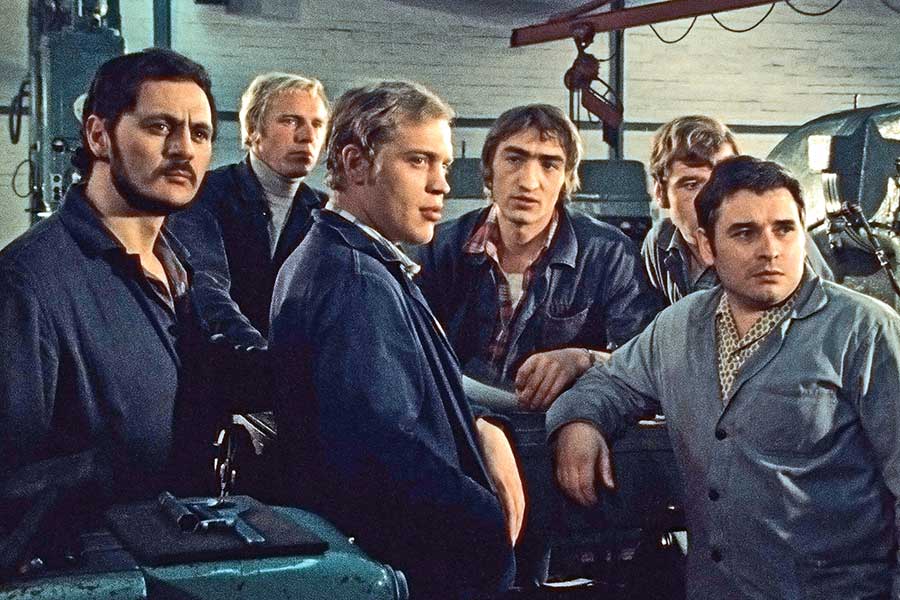 Fassbinder’s work, which depicted postwar Germany, was groundbreaking. He was not afraid to be sexually frank: His last film, “Querelle,” based on a Jean Genet work, drips with homoeroticism. The filmmaker also wrote, directed and starred in the queer-themed “Fox and His Friends” in 1975.

But he is best known for films that were sympathetic to women and social outcasts, particularly “The Marriage of Maria Braun,” “The Bitter Tears of Petra von Kant” and “Ali: Fear Eats the Soul” — the latter a riff on Douglas Sirk’s “All That Heaven Allows.” One of Fassbinder’s greatest achievements over his remarkable career was his 15 hal-hour miniseries “Berlin Alexanderplatz.”

With “Eight Hours” screening in Philadelphia, I spent a day binge-watching the miniseries, which was wholly absorbing throughout each of its five 90-100-minute episodes. The series stars several actors who worked with Fassbinder multiple times, including Gottfried John and Hanna Schygulla (who play the lovers Jochen and Marion), as well as El Hedi ben Salem, who was Fassbinder’s lover at the time and appears as a factory worker in the series.

Episode One: Jochen and Marion

Plot: The series opens at the 60th birthday party for Grandma (Luise Ullrich). Her grandson, Jochen (John), goes out to buy some bubbly and meets Marion (Schygulla). He brings her home to meet his extended family and they soon become romantically involved, though not without some complications. Meanwhile, at his factory, Jochen invents a device that will speed up production. It is beneficial until management decides to remove the bonus for getting the work done faster.

Analysis: Fassbinder creates a group of warm and engaging characters, allowing all of the working-class family members to ingratiate themselves with viewers (or display their nasty qualities so we hate them). Grandma is a spitfire, and Jochen is endearing. The filmmaker often zooms in for exacting close-ups to create emotion and emphasis as the story teems with messages about social justice and class differences.

Plot: Grandma wants to move out of the family home and into a flat with Gregor (Werner Finck), her boyfriend. While searching for an apartment, they see a local library closing and illegally fix up the space to establish a much-needed nursery (kindergarten). The new venture is welcomed by everyone — except the authorities.

Analysis: This episode features some terrific 1970s decor and fashions, and the storyline is a showcase for both Grandma’s indomitable spirit and Ullrich’s fine performance. If the nursery storyline goes on a bit too long — one could run off to the bathroom and not miss much — this episode features a subplot that does have important repercussions: Franz (Wolfgang Schenck), one of Jochen’s colleagues, is inspired to improve himself and apply for the factory foreman position. The episode also has a feminist message, as it shows how the women characters start to emancipate themselves.

Plot: Franz’s efforts to become foreman are met with mixed messages from his supervisor, Volker (Rainer Hauer), who hires Ernst (Petr Gauhe) instead. This sets off a war between the workers and management. However, the workers learn that Ernst is far less a villain than they imagined.

Analysis: The compelling plot has Jochen and his colleagues refute their supervisor’s message that “the worker should remain what he is.” It is made all the more gripping by Fassbinder’s virtuoso staging and filming of the sequences on the factory floor and in Volker’s offices. To offset the drama, there are some comic subplots, ranging from Jochen having three meals of stuffed cabbage back-to-back-to-back to the fighting between Grandma and Jochen’s father, Wolf (Wolfried Lier). This is the best episode in the series.

Analysis: This may be the most melodramatic episode, with characters all coupling up or uncoupling. And after six-plus hours, viewers may start to tire before or during an extended party sequence in the last third of the episode that features all the characters. However, rally on! This section of the series is the “bridge” that will set up the finale.

Plot: The workers learn the factory is relocating across town. In response, they demand to independently organize their work, which management surprisingly appreciates. The relocation also prompts Jochen and Marion to ask to swap flats with his parents. Meanwhile, Jochen’s friend, Manfred (Wolfgang Zerlett), pines for Monika.

Analysis: While most of the plotlines are tied up nicely in this last episode, there is a nagging question raised about the benefit of the workers self-organizing. The romantic storyline involving Manfred and Monika is highly satisfying, and Fassbinder deftly directs the sequence where everyone moves. While it is an enjoyable conclusion, the series could continue for eight more hours; it goes down as smoothly as a shot of schnapps.

“Eight Hours Don’t Make a Day” will screen July 7 starting at 1 p.m. with two episodes, a break, two more episodes and then another break before the final episode. Craft teas and food will be available.