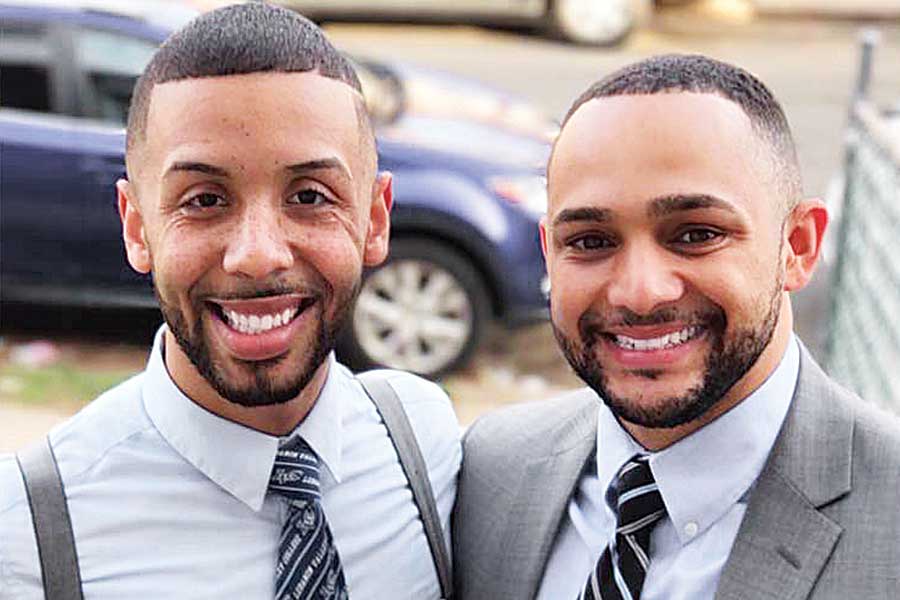 Where there’s a parade, there’s usually a big float carrying a grand marshal. Philly Pride Presents names several grand marshals each year. In fact, PPP was the first organization in the country to include youth grand marshals.

This year, along with the usual contingent on the Philly Pride Grand Marshals float, a couple will be recognized with the new category of Grand Marshal Couple. The inaugural Pride couple is Dante Austin, the LGBT liaison to the Sheriff’s Office, and Robert “Tito” Valdez, an assistant city solicitor in the Child Welfare Department.

Austin and Valdez met when they were attending the “Future of the Movement” panel discussion during the Democratic National Convention in 2016. As they mingled, they talked about criminal-justice reform and other topics of interest to both of them. Before parting, they exchanged information, and the rest is history.

As you might imagine, the couple stays pretty busy with their jobs, which may require more than just the 40 hours per week most people are used to. They agree that quality time and discussion are keys to supporting one another.

“Being in a relationship is work,” said Valdez. “It requires the capacity to prioritize another person’s feelings and needs as a key component of your decision-making. It requires you to be compassionate, to understand that not every day will be sunshine and flowers, and be able to count on your partner to love you.”

“I like to think of it like most things in life — you get out of it what you put into it,” said Austin. “Tito and I live pretty busy lives but we make sure to always make time for one another. It may sound cliché, but he really is my best friend and so much more. Life certainly throws challenges our way, but there’s no doubt in my mind that we can tackle anything.”

As the first couple tapped for the new marshal category, Austin acknowledged the opportunity to show the LGBT and non-LGBT community how love between two people, regardless of gender, ethnicity or other dividing labels, can ease some of the discrimination in the world.

“One of the common reasons members of our community are discriminated against is rooted in who we love,” he said. “So for us to be able to ride on the grand-marshal float as a proud, openly gay couple is a great feeling. I think that moment will only add to our pretty gay love story.”

The other grand marshals in this year’s Pride parade include John James, a Philadelphia elder who marched in the Annual Reminder Days at Independence Hall in the mid-1960s; Heshie Zinman, cofounder of the AIDS Library; David Fair, part of the Elder Initiative; Barbara McLean, known for her work in health, especially with trans people, through Philadelphia FIGHT and The Philadelphia AIDS Consortium; and Deborah Johnson, visitor-services director at the African American Museum of Philadelphia.

McLean said she’s especially proud to have been chosen for the 30th anniversary Pride, and to be part of the “varied relevance in the LGBTQ community.”

“My presence in this/my community has been orchestrated by love, need, pride, resistance, fear and fight,” McLean said. “And I continue to rise up!”

This year’s youth grand marshals will be Paige Aiken and CiCi Griffin. The two were chosen because, as Alyssa Mutrin of The Attic said, “they are both committed to developing their own leadership skills and making positive contributions to the LGBTQ community in Philadelphia.”

The 2018 Friend of Pride honor is bestowed upon Councilman Derek Green, a longtime advocate for LGBT rights and protections. The 30th annual Pride parade and festival will be held June 10.