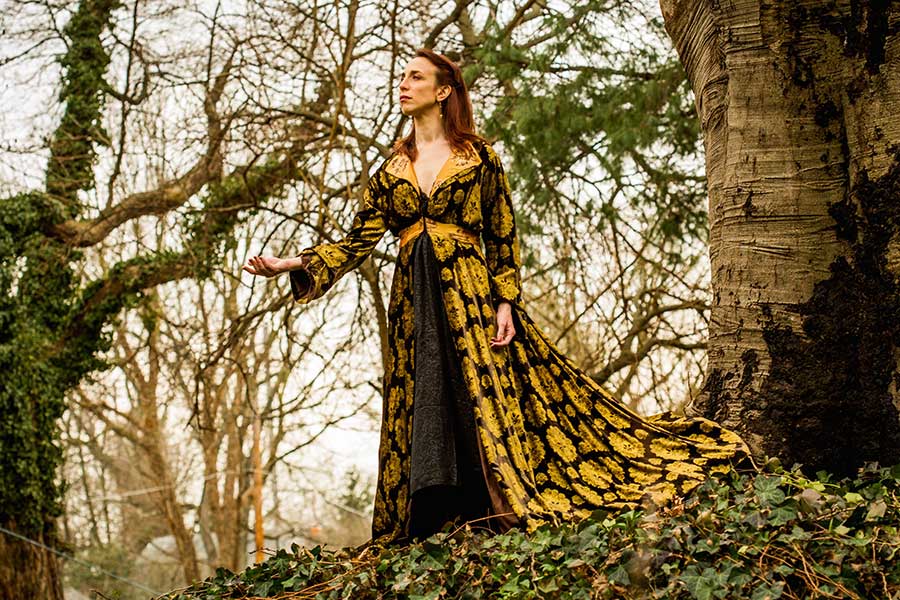 Before Terry Brennan’s Tribe of Fools brings “Magdalene” to the stages of the Adrienne Theatre April 6-22 with its quietly enlightened and gnostic gospels-inspired take on the 13th apostle, consider the company Tribe of Fools is keeping.

Since 2003, Tribe of Fools (ToF) has not only been Philly’s most breathlessly athletic, movement-oriented and kinetic assayer of incendiary theater, tackling tales of sexual identity, power dynamics, gender position, neighborhood politics and family, but the troupe is also one of the city’s LGBTQ-friendliest. Themes of machismo and sexual preference weave their way into ToF pieces such as 2011’s “Heavy Metal Dance Fag” and 2014’s “Two Street.”

Each year, ToF develops a new play using dance, theater, acrobatics and other forms of visual storytelling. This year, “Magdalene” features actor Colleen Hughes and the work of author/playwright Rachel Gluck. Artistic director Brennan and out staging director Doug Greene talked to PGN about their iteration of Mary Magdalene not as a fallen woman, but a powerful one, who was “sidelined for the crime of being a woman.”

PGN: Who is the real Mary Magdalene to you, now that you have an understanding of the vision and inspiration from the gnostic gospels?

DG: To me Mary Magdalene was always my favorite character in “Jesus Christ Superstar!” Now I see her story as an ancestor to the Salem witch trials, or to our most recent presidential election. Again and again, we see the narratives around powerful women manipulated and changed by the men who feel threatened by them.

TB: Before this play I always thought of Mary Magdalene as the cooler of the two Marys — there was Mary, the mother of God, and then there was Mary Magdalene, a character with flaws who I could relate to. If Jesus’ mom was the straight-A student, Mary Magdalene was the girl who was just as smart but cut class to smoke cigarettes out behind the school. Now I think of Mary Magdalene more similarly as an exiled leader. I didn’t realize how influential Mary Magdalene was when the church started. At the same time, I wasn’t surprised to learn that she was essentially sidelined for the crime of being a woman. In a lot of ways, I now think of her in a similar light as Joan of Arc.

PGN: Several ToF shows touch heavily and humorously on LGBTQ issues, “Two Street” and “Heavy Metal Dance Fag” in particular. Doug, as a gay man, how do you feel that Terry has handled this? And Terry, as a straight man, how do you feel you went about being sensitive while touching on LGBTQ issues (you seem to play up the stereotypes of South Philly men and women, while making certain gay characters have no stereotypical behavior?)

DG: ToF and Terry are great allies to the LGBTQ community. In the theater community, we give a lot of lip service to diversity, but not everyone is as successful at it as ToF. ToF has LGBTQ artists, board members and audiences as part of their genetic makeup. The work they create reflects the voices they have in the room.                                                   TB: As a straight person, I’m on guard about using stereotypes of LGBTQ people. Obviously stereotypes of all types of people exist, and can be leveraged for comedy and to make a larger point, but if I’m not part of the group that we’re sending up, then I don’t like to make the jokes. That all being said, as you pointed out, I’ve often sent up the machismo behavior of South Philly. There are some days that I feel a little bit weird about that. Ultimately I try to come at the sending-up of straight Philly characters with as much love as possible. I try to write in contradictions within the characters, so that they aren’t just stereotypes — but as caricature and satire go, I’m sure that it leaves a bitter taste in some people’s mouths.

PGN: Why do gay-themed/friendly plays make sense? How does that translate into a good business decision? And how is “Magdalene” a part of that decision/vision?

TB: The gay-themed/friendly plays we make are more of an outgrowth of company culture than a business decision. A lot of our actors, designers and board members are queer, and I’ve always felt it is important to tell stories that have queer characters that don’t need to revolve around their identity as queer. As a matter of principle, we try to have at least one LGBTQ character in every play. As far as a business decision goes, it definitely doesn’t hurt. People like to and need to see themselves and their stories on stage, so in a way, we’re widening our audience base, but also LGBTQ audiences are pretty loyal. In relation to “Magdalene,” there are quite a few LGBTQ moments. I don’t want to spoil anything, so I will keep this brief, but we definitely speculate on Jesus’ sexual orientation and the play looks pretty hard at Betty Friedan’s active exclusion of lesbians and the problematic nature of second-wave feminism.

PGN: Talk about your takes on the Tribe of Fools aesthetic, specifically its arc from the beginning in 2003 to “Magdalene”?

TB: Our aesthetic has always been a physically stylized one. While we’re known for acrobatics and comedy, and that is where we really like to live, we’ve done heavier works in the past. For example, we created a short piece about the Berlin Wall when we appeared on the television show “Fake Off,” which was incredibly popular. That piece was quiet and lyrical; very different from our usual fare, but still physically engaged. “Magdalene” is an exciting shift for us, but we’ve been here before. I like to think of pieces like “Magdalene” as savory touches to our usually sweet menu.

PGN: When, how and why did you find yourself involved with the “Magdalene” team/trio of women? What did you first love about that vision?

TB: I saw a much shorter version of this two years ago at SoLow Fest. It was a 30-minute play that was put up to test out what worked and what didn’t. What drew me in was Mary’s antagonistic relationship to Peter. I love hearing different versions of the same stories. I really loved the movement language they were playing with. It felt like the opposite side of a coin. If Tribe of Fools is springtime, the movement in “Magdalene” is autumn — very similar in feel, but different in tone and intention. What I love about the updated version of “Magdalene” is that the artistic team has really leaned into the movement style.

All performances will be at Second Stage at the Adrienne Theatre, 2030 Sansom St. Tickets are $15-$20.