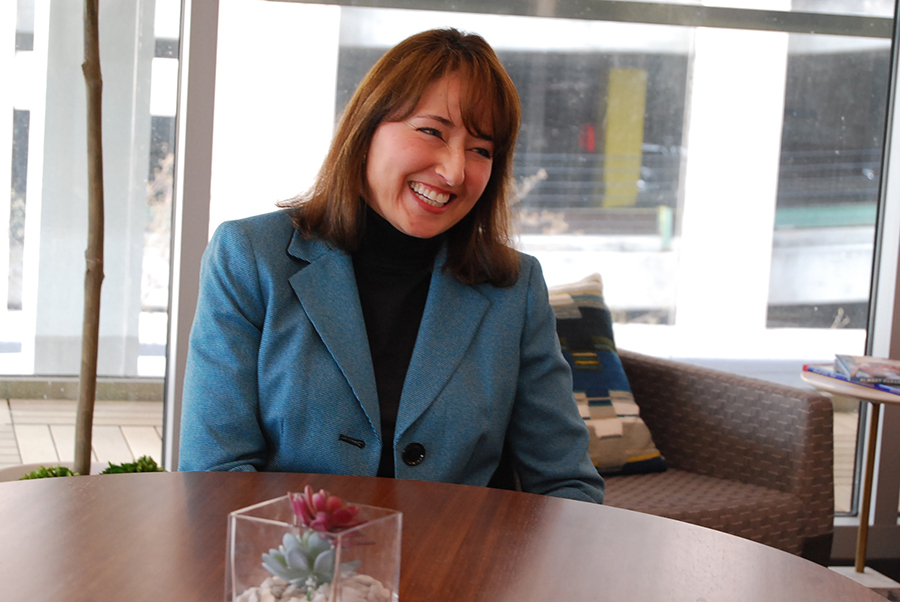 “I feel honored about that,” Gonzalez Sciarrino told PGN in her first public comments since her hiring. “I look forward to this opportunity to be a greater advocate for the LGBT community.”

Gonzalez Sciarrino said she was “ecstatic and thrilled” after receiving a phone call earlier this month notifying her she was selected to be Mazzoni Center’s new CEO. She said a five-month, national search took place prior to her being offered the position.

“It was a very extensive vetting process,” she noted. “I feel honored.”

Gonzalez Sciarrino, 50, cited her career in non-profit work as one of the reasons she applied for the CEO position. “I’ve always been for the marginalized — for the individual that other people don’t give a chance.”

The incoming CEO has worked for six non-profits over the course of her career. “I get enjoyment and self-fulfillment from working for non-profits. The mission of an organization is very important to me.”

Gonzalez Sciarrino’s last post was CEO at the Whole Family Health Center in Ft. Hood, Fla., where she said she helped stabilize and expand the agency. “I put a structure in place and formalized policies and procedures,” she said. “I also established a chain of command.”

Mazzoni Center, which turns 40 next year, is a comprehensive LGBT-focused health center based in South Philadelphia. The center has 35,000 clients and an annual budget of $16.5 million, $6 million of which is comprised of federal grants. The balance comes from revenue generated through the health center and private-development funding.

An estimated 20-25 percent of the clientele is non-LGBT, said Larry Benjamin, Mazzoni Center’s director of communications.

Last year, Mazzoni Center was plagued by published reports of systemic racism, mismanagement and dysfunction. In April 2017, Robert Winn resigned as medical director amid charges of sexual misconduct. CEO Nurit Shein was asked by the board of directors to resign later that month, following accusations of delayed action on Winn’s alleged misconduct.

Mazzoni Center “has had a tough year,” Gonzalez-Sciarrino said. “But the organization has exceptional employees. In the midst of everything that’s happened, they’re still there.”

Shein, an out lesbian, led the organization for 22 years. Her annual salary and compensation at the time of her departure in April 2017 was roughly $183,000, according to published reports.

Gonzalez Sciarrino said her annual salary will eventually be released to the press. “We’re still in the process of finalizing the details of my employment, which will begin on April 2,” she said.

Gonzalez Sciarrino said she has no plans to reach out to Shein for advice, but she’s been in contact with interim CEO Stephen Glassman to facilitate the transition.

Glassman “will be a resource for me. Also, there are many leaders within the organization that I will consult.”

She’s also the first Latinx individual to lead Mazzoni. “Every experience I’ve had will help me in this new position,” she said. “I want everyone to feel welcome and included at Mazzoni.”

Gonzalez Sciarrino said she doesn’t view the union negatively. “I will work with union reps; that’s not an issue at all. Union negotiations don’t have to be acrimonious. We’re all working to make positive changes in the organization.”

She said she hasn’t yet visited Mazzoni Center’s new $13.5 million building on Bainbridge Street, but said she will tour the facility on her first day, April 2.

Gonzalez Sciarrino was asked her vision for Mazzoni Center’s future. “I have my own thoughts, but I want to hear what the staff has to say. I view them as individuals who know better what their clients need, want and wish for.”

She also expressed excitement about leading Mazzoni Center when it celebrates its 40th birthday in June 2019. “I will not let the organization down,” she said.

Gonzalez Sciarrino grew up in Puerto Rico, but moved to Erie, Pa. at the age of 20, where she attended Gannon University. She received a Bachelor of Science degree in finance from the university in 1989.

Her last day at Whole Family was Feb. 2 and she recently moved to Philadelphia, where her husband Anthony Sciarrino was already living.

Anthony Sciarrino is a local attorney who specializes in the insurance field. The couple has been married for 24 years. “He’s a beautiful human being and a consummate professional,” she said. They don’t have any children.

Gonzalez Sciarrino and her husband are currently renting an apartment in the Art Museum area, but hope to eventually purchase property in the city, she said.

With her professional background and education, Gonzalez Sciarrino said she chose to continue in the non-profit field rather than working in the corporate world. Mazzoni Center aligns with her core values, she said, one of which is to improve the lives of others.

“I view myself as someone who’s made a decision to go against the current, on a lot of issues.”