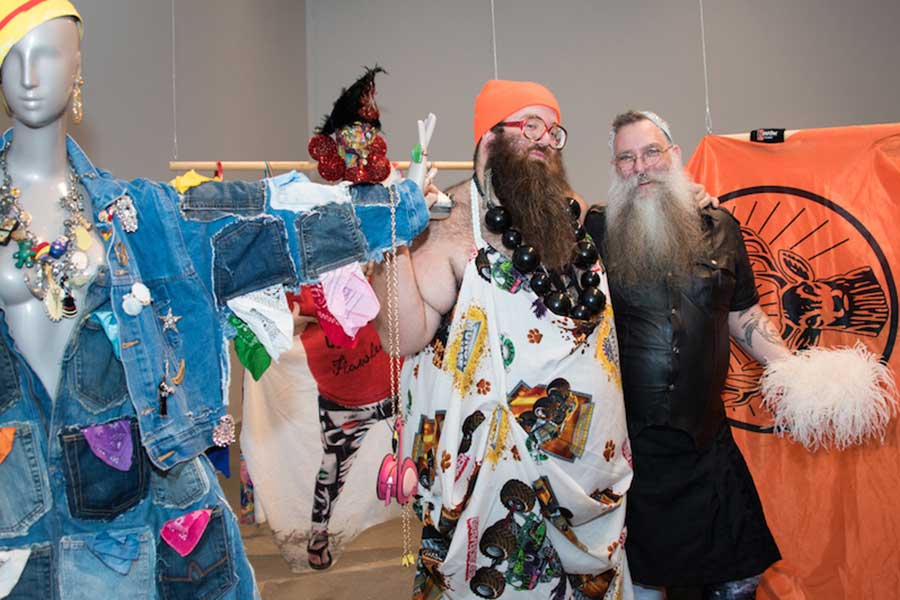 Nayland Blake is interested in how the new generation of queer people perceive themselves and the world, as well as how they present themselves to the world.

So his project for Philadelphia’s Institute of Contemporary Art, entitled “Tag: Proposals on Queer Play and the Ways Forward,” proved an ideal outlet.

The queer artist, writer, educator and curator, who lives and works in New York City, curated contributions from a number of cutting-edge young queer artists, including Saeborg, Dusty Shoulders and Robert Yang. The free exhibit opened last month and runs through Aug. 12.

PGN spoke with Blake about the exhibit and how th185 current crop of queer people may (or may not) differ from previous generations.

PGN: How would you describe the show to someone who doesn’t have an art background? What can they expect when they see the show?

NB: When you come and see the show, you’re going to see a lot of video. You’re going to see documents of people dressing up in various ways. You’re going to see a big, inflated latex pig. You’re going to see some stuff that looks like you’re inside a funhouse that looks like a video game and some stuff that looks like family pictures. It’s actually a show that’s more about people’s everyday experience than you would normally see at an art museum. When putting the show together, I wanted to talk about the ways in which queer people are creating and exploring possibilities for identity and community together. I was born in 1960, so for me, many of those places where that used to happen was at bars or at protests or marches or potentially at places like gay and lesbian bookstores. These days, the places where people are doing that are online, and this is where another generation of young queer people are coming together and meeting each other.

PGN: Aside from superficial differences, do you think today’s young queer people differ from those of us who lived through the Stonewall era?

NB: I think there are lessons that each generation can teach each other. I would say that one of the things that the younger generation is having to grapple with right now is the fact that what they think of as a public space or a private space online can go very quickly from feeling like a safe space to being a very dangerous place. But this could be something positive that they bring to the table in that they see how it’s possible to present image and identity in a very fluid and playful way than necessarily we thought was possible in an earlier generation.

PGN: It’s been my experience that, in the gay community, the generations don’t really get along with one another. And so, often what can be learned between the generations is not learned.

NB: Yeah. And one of the things I tried to do with the show is to provide a space where those things can start to overlap, in a situation that does not feel threatening.

PGN: If an older person comes and sees the works in this show, will that enhance their understanding of how younger people perceive the world?

NB: I think so, yes. When we look to an earlier generation of queer art, the question of representation was often paramount. Like, why don’t we see representations of gay love in paintings or in other art forms?

PGN: But visibility first is a phase any community’s art has to go through to get to the next level.

NB: Exactly. Here’s the thing that I think is different about this younger generation of queer artists today: There is a difference between, say, going to a movie featuring a character that somehow represents you, and playing a video game where you adopt the persona of a person — where you have character creation [and] where you get to make choices within the narrative.

NB: I think play is a thing that humans do that allows them to think through ideas in a context that might otherwise be too threatening for them. So, when you think about kids playing, it’s not that they’re not doing something important. In fact, when kids play, they’re often playing about something that’s life or death. We may think back upon it nostalgically as something light-hearted, but it’s actually learning important skills. I think that humans do that throughout their lives. It establishes that identity is something that is built in concert with other people, that it is a thing that shifts. And I think queer people understand this, going from work to home to leisure; identity shifts, what and how you present changes. To go back to your original question, I would say to people, Come to the show. There are a lot of pieces in the show, some of which you’ll respond to, some of which you may not. n

“Tag: Proposals on Queer Play and the Ways Forward” is on display through Aug. 12 at the Institute of Contemporary Art, 118 S. 36th St. For more information, visit http://bit.ly/2CSJgSR.