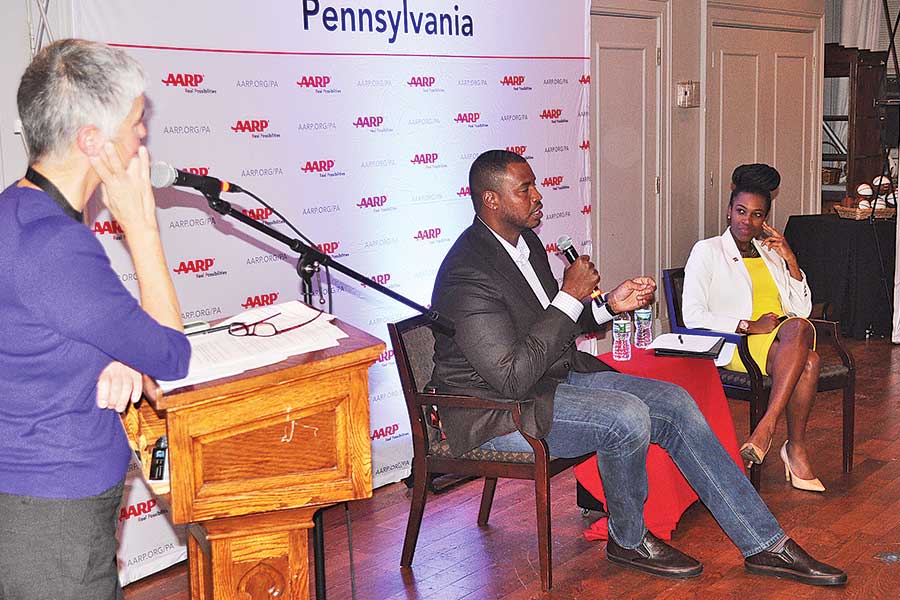 Jason Collins came to town mere days after his celebrity death hoax — and looked no worse for wear. The victim of yet another round of such hoaxes recently, he wasn’t even aware he was “dead.”

He told those assembled at William Way LGBT Community Center Nov. 21 that his dad had fallen and broken a hip within weeks of turning 65. Coincidentally, he was in town doing some promotional work with AARP.

“People get old,” Collins said. “We all get old. One of the reasons I’m working with AARP right now is to spread awareness of their work. There’s a lot of great programs.”

Lately, Collins, the NBA’s first openly gay player, has been an ambassador for the basketball league, promoting the sport, inclusion and diversity. When asked about the NBA policy regarding the National Anthem (players are required to be present and stand), he said he hadn’t had the opportunity to challenge that rule and wasn’t sure if he would.

“For one thing, that floor is wood and it’s hard on the knees,” he said. He added, “Taking a knee is an NFL thing but we support them.”

Collins works with a number of youth groups and talks to coaches about sport-related mindsets that keep perpetuating.

“Something that every male athlete has heard is, ‘Don’t throw like a girl,’” Collins said. “Just a comment like that that everyone has heard, you’re forcing a division between masculine and feminine. In junior sports, it’s the athletes that set the culture. So hopefully we can affect the coaches who can affect the players and we can change that culture.”

Collins came out in 2013 while still playing in the NBA — a gutsy move, but many describe his coming out as having looked easy. He didn’t think so at the time, but it was the way he, his teammates, family and the general public all handled it that made it seem so.

While playing, Collins wore the number 98. If you had asked him why when he chose that number, he’d tell you it was because he fouled a lot and wanted to mess with the refs. (Basketball refs hold up fingers to represent the fouling player. Who knew?) But the truth of the matter was it was also the year Matthew Shepard was murdered; the number was a tribute to the gay college student.

Collins’ other role is in a completely different sport: tennis. He’s an avid fan, has been to Wimbledon more than once and one of his idols and heroes is Martina Navratilova.

“It was the only time I was tongue-tied,” he said about meeting the tennis great. “When I first met her, I couldn’t speak. I was in awe.”

He also spent time with Billie Jean King on more than one occasion and is committed to a charity tennis program in L.A. in early December. It’s a program that will involve many inner-city youth who haven’t had an experience like it before. Ask him how well he plays and he’ll tell you the flat-out truth.

“I gotta bring it,” he said. “There’ll be kids there who can probably hit the cover off the ball. I can hit well, I just can’t move well. If the ball comes to me, I’m good.”

Collins is working to demonstrate that everyone is an example and that the goal is equity and diversity. He urges those who witness anything other than those ideals to step up and get involved. Basically, sidelines are full of people waiting to get in the game — and more should.

If you ask Collins if he ever thought he’d be this kind of a role model, he will humbly tell you that all athletes are role models in some way.

“I get to interact with players and coaches in a different way than playing,” Collins said. “But no matter how you interact, you’re still going to be a role model to someone.”

Collins has participated in a number of NBA diversity initiatives, but there are still many to join in. Philadelphia is one of them.

“I’ve done events with New York teams and some on the West Coast,” he said. “And in Miami they had an Out and Proud Day that I was at. But as for the 76ers … Um, I haven’t been invited yet!”

Heroes, idols and mentors come in many sizes. Some are 7-feet tall like Jason Collins. But size doesn’t matter. So whether you play tennis or basketball or another sport, get involved. And to do that, of course, you must get out and play!

Scoring a win for LGBT athletes through history