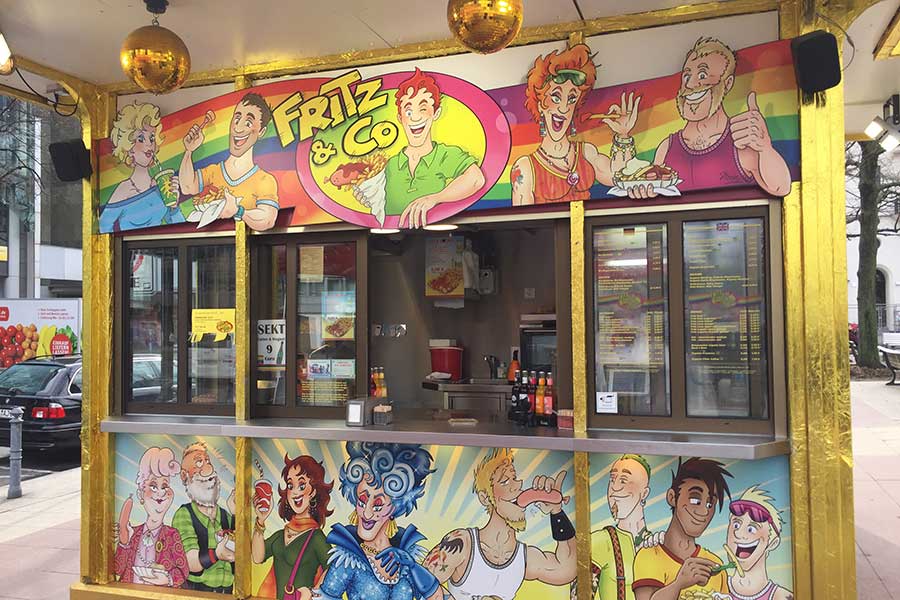 Berlin has been a pioneering force in the LGBT-rights movement ever since Magnus Hirschfeld founded the world’s first homosexual advocacy group — the Scientific Humanitarian Committee — in 1897. What may be astonishing to anyone visiting Berlin for the first time is that, for such an old city, its history is abundantly defined by modern times.

Gay life thrived in the German capital in the freewheeling 1920s until Hitler came to power. The Nazis deported more than 50,000 gay men to concentration camps where a pink triangle affixed to their clothing outed them as such. Two memorials serve as sobering reminders of this dark chapter in German history: a pink granite triangle on Nollendorfplatz in Schöneberg and the Memorial to Homosexuals Persecuted under Nazism on the eastern edge of the Tiergarten Park.

The best way to visit and understand Berlin is through a walking tour. I found the Original Berlin Walks online and booked an excellent half-day tour. To understand Berlin, you need to remember that 75 percent of the city was destroyed and rebuilt after World War II. You also have to understand that the Berlin Wall divided the city into two distinct parts. It is a city that once deported people to Nazi concentration camps but is now welcoming everyone.

Berlin is majestic. It is historic. It is diverse. LGBT tourists go to Berlin to party hardy or explore the city’s history, including The Gay Museum. Rainbow flags are ubiquitous in Schöneberg, where gay-owned businesses range from boutiques to restaurants to bookstores. Many bars and pubs in Schöneberg are considered institutions. The city’s LGBT scene is expanding. Tourism officials say younger gays tend to prefer other neighborhoods, Kreuzberg and Friedrichshain especially, for flirting and partying, but there’s plenty happening in Schöneberg. A classic cruising spot is Tom’s Bar, which draws a good mix of locals and Berlin visitors. Connection is another crowd magnet; here, patrons rock the dance floor or get lost in the giant cruising labyrinth. New Action exerts its pull on the fetish crowd, which is especially strong in Schöneberg.

The Lesbian and Gay Street Festival is the main summer event for a weekend in July and is one of the largest festivals of its kind in the world, attracting more than 350,000 visitors each year. The festival is also an essential during Berlin’s Pride Weeks, which cover the month of July, bundling together more than 200 cultural, political and sporting events. In addition to the festival, the Berlin Pride Weeks include the Christopher Street Day Parade and Gay Night at the Zoo. Folsom Europe is a festival held in early September each year that turns Berlin into the place to be for Europe’s fetish scene. Women, meanwhile, gravitate to Begine for dance parties and cultural events.

The hotel network pink pillow Berlin Collection, which focuses specifically on queer tourists, is a unique initiative of visitBerlin and citywide hotels. Currently, almost 60 hotels in Berlin stand for gay-friendly accommodations. The pink pillow Berlin Collection will be gradually expanded by other hotels. A current overview of the participating hotels and more information can be found on pinkpillow-berlin.com.

Get ideas and plan your trip at gay.visitBerlin.com.

Jeff Guaracino is the author of “Handbook for LGBT Tourism and Hospitality” and “Gay and Lesbian Tourism: the Essential Guide for Marketing.”