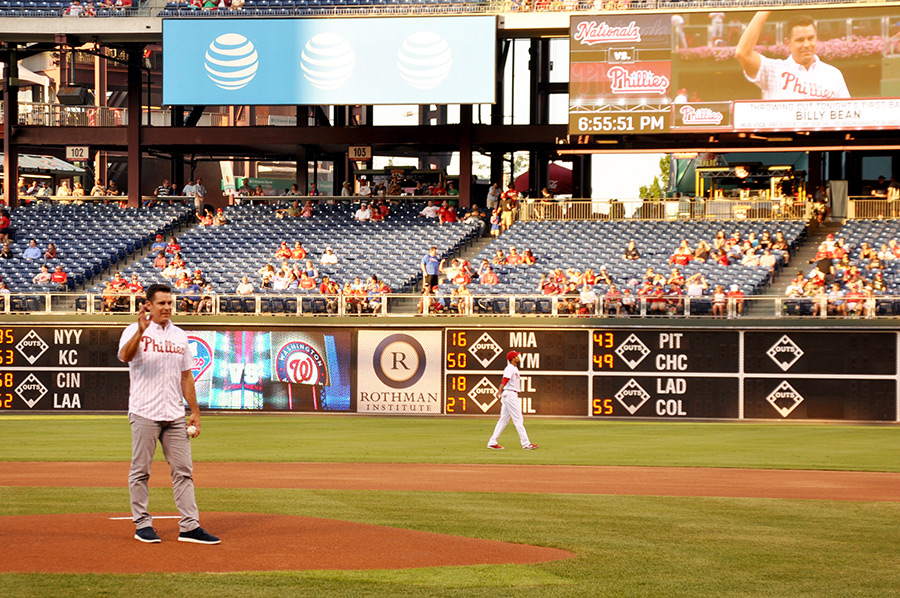 Interviewing Billy Bean is like sitting down with a long-time friend you haven’t seen in a while and chatting about wherever the conversation takes you. Gregarious, handsome and thoughtful, Bean is the perfect representative for inclusiveness in Major League Baseball.

“The first word in the headline was ‘gay,’” Bean said, referring to a recent Tweet associated with his appearance with the Mets. “It’s the first word they define me as for the rest of my life. I will always be the gay player. I’m an out and proud gay man now, so I’m fine with that.”

Fear of coming out while playing hasn’t changed at all in the past decades. There are many factors and each situation has its uniqueness. Whether it’s the homophobia shown by another player, a fan catcalling from the stands or fear of becoming the one guy everyone points at on social media, any reason seems to be a good one. Considering the response and reaction to other athletes coming out, Bean thinks it could be a long time before the sport of baseball comes to terms with players coming out.

“I can tell you that it was not historically an accepting place to hang your hat there,” Bean said. “But every player that’s playing right now has heard of me and they know that baseball is trying to move forward. If you try walking in being the only gay person in a room and talking to a bunch of millionaires who play baseball in the big league, it takes, well, balls.”

One of the things that changed in baseball in a collective-bargaining agreement not long ago was the addition of bereavement leave for ballplayers and staff to grieve over a lost loved one. Part of that was for teams also who could not replace a player who left. Bean said when he thinks about that he gets choked up. His partner passed away on a day that he had a game and Bean couldn’t get away. He couldn’t even explain to anyone what was going on because he wasn’t out.

Generationally, baseball players still have the old guard of older white men, not all of whom are open-minded, still in places other than the playing field. Bean thinks there is still enough resistance from coaches and broadcasters to explain why younger, more free-thinking players aren’t coming out. But the evolution is still in its infancy when it comes to acceptance, he said.

“In 147 years, we’ve only had two former players come out,” Bean said. “To get to the major leagues, you are a baseball player — and I think you identify as that and I think that a lot of people perhaps are uncomfortable with that dynamic changing.“

He said he recognizes the frustration among many fans when there isn’t a same-sex couple featured on the Kiss Cam at various parks. While it has happened on occasion and one even accidentally when the camera crew couldn’t obviously tell gender well by how two women were dressed, Bean says that maybe it isn’t what we would all want anyway.

“It’s a platform in front of 40,000 people that’s instantaneous,” he said. “There’s a lot of ways things can go south with that. I just don’t want 15 Phillies fans, who didn’t know tonight was Pride Night, going off on social media and slowing the process.

“I’ll be really thrilled tonight if it all goes just the way it’s supposed to,” he said in advance of last month’s LGBT-themed night, which, by all accounts, was a success.

Since other sports have had players come out while playing and some while in college or even high school, Bean thinks and hopes that the first openly out MLB player will have an established relationship that is strong enough to endure the initial repercussions from coming out. He’s just hoping that the first out active player isn’t outed by someone else, for whatever reason.

“It’s amazing, the world of trust on social media,” Bean said. “You become a target. It’s a nasty entrapment. But it shows the way we trust social media. We expect people to be honest. What happened with the outing of players in Rio made my stomach churn.”

Bean has been a mentor, spoken to groups on bullying and homophobia, continues to respond to Twitter comments and offers to participate at stadiums or other platforms. He also is a pretty good pitcher, throwing a strike from the mound for the opening pitch at Pride Night — which he then tossed to me, winking and thanking us for coming out and hearing his story.

• Philly Roller Derby is holding skating workshops 11 a.m.-1 p.m. Sept. 10 and 24 at Our Warehouse, 5378 Belfield Ave., for the public to learn about roller derby, the derby league and to improve skating skills. Bring your own skates and protective gear. Email ZipBlok at [email protected] with any questions. Cost is $8.

• There’s another option for weekend workouts on Saturday mornings with the Philadelphia LGBTQA-Friendly Athletic Training Meetup, 8:30 a.m. at Edgley Fields near Reservoir Drive.

• The Philadelphia Gryphons Rugby Football Club opens its season at 1 p.m. Sept. 10 at Pepper Middle School, 2901 S. 48 St., followed by the third half starting around 4 p.m. at Boxers.

Until two weeks from now, get out and play. Email sports info to [email protected].