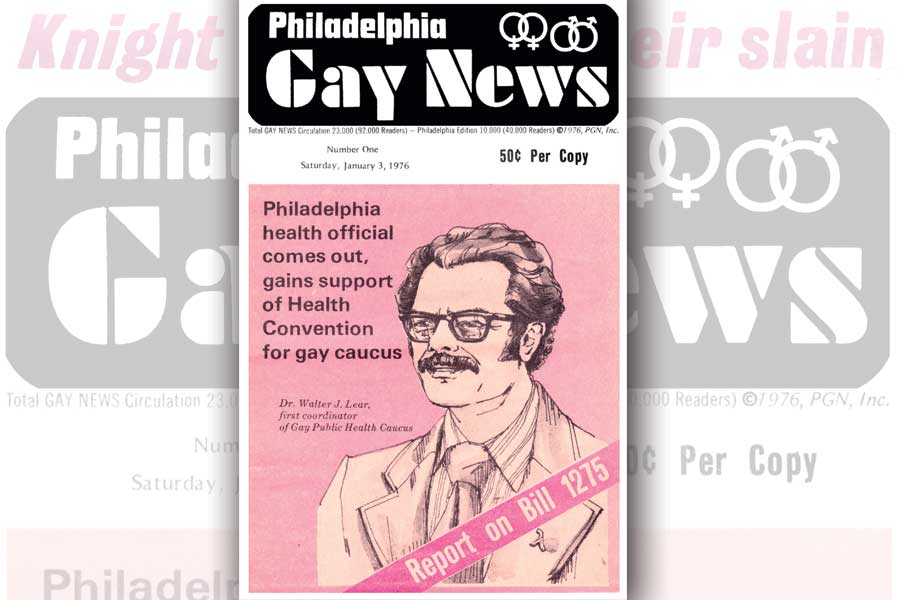 “With the publication of the first issue of the Philadelphia Gay News, a whole new dimension has been added to Philly’s gay community and, in fact, to the city’s publishing industry in general,” PGN’s then-editor and co-owner John Keith Clark wrote in the paper’s inaugural Jan. 3, 1976, edition.

“The gay community has matured in the past few years,” added then-co-owner, business manager and founder Mark Segal, “and when a community matures, it needs a mature communications medium. I think the Philadelphia Gay News will be that medium for our community.”

The pair, along with general manager Jim Austin, got that first paper off the ground and onto the streets, opening a new era of LGBT journalism in Philadelphia.

So what did the folks who produced that first issue — put together in a makeshift office at an employee’s apartment — bring to the table?

According to a staff-introduction article in the inaugural edition, Segal’s activist background would help the company raise the profile of the LGBT community.

“With the cheek of a Saul Alinsky, the commitment of a Ralph Nader and the energy of a Martha Raye, he’s gotten more press response — locally and nationally — than perhaps any other gay activist in the country,” the article stated.

Clark brought an extensive journalism background: He wrote for the Denver Post, Philadelphia Inquirer and LGBT publications like The Advocate and Pittsburgh Gay News. He was also the founder and first administrator of the Eromin Center and helped form the Philadelphia Gay Switchboard.

•       Entertainment columnist DuMontHoward: theater critic with Gay Alternative, University of Pennsylvania student and founding member of Gays at Penn and the Gay Coffeehouse

•       Contributing writer Janet Cooper: former Shippensburg instructor (who “caused a minor scandal on campus by coming out”) and member of the Pennsylvania Commission on the State of

Women and the Governor’s Task Force on Gay Rights

•       Staff photographer Harry Eberlin: photo credits ranging from Gay to The Advocate to The Drummer

•       Contributing writer John Zeh: writer for The Advocate and The Drummer and WMMR radio reporter, with his own show, “Sunshine Gaydream,” on WXPN-FM

•       Contributing writer Richard Rusinow: writer for The Advocate and Gay