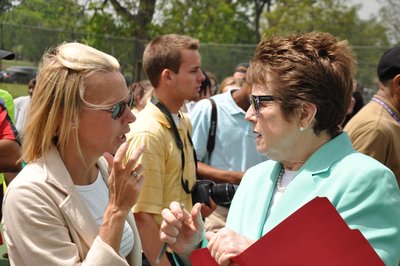 On May 15, I went up to Hunting Park to talk to out 39-time Grand Slam winner Billie Jean King.

The occasion was the one-year anniversary of the park’s tennis courts being dedicated. After a tour of the courts a few years earlier, King created a foundation dedicated to inner-city park courts, and Hunting Park was the first recipient of foundation donations.

The city’s Department of Parks and Recreation had previously tapped Ryan Howard and his foundation for a world-class baseball field and Michael Vick’s Family Foundation for an upgraded football field, so King was a logical choice for the latest park improvements. The Hunting Park area of the city doesn’t have many of the amenities that we take for granted throughout Center City and its adjoining neighborhoods.

This year, King donated 100 tennis racquets, shirts and other items to be used by surrounding schools and sports groups via the Philadelphia Freedoms — a world-class tennis organization in Philadelphia that King also co-founded.

The focus of last month’s event was, of course, the youth. King was in her element — talking, laughing and having photos taken with nearly every kid there.

Why this park and why here in Philadelphia?

“I feel it’s important to give something back,” King said. “I started playing in a city park and I know what it means to have this kind of opportunity. It’s a chance to do something that not everyone has the chance to do. And of course the first year I competed was here, in Philadelphia.”

Legacy Youth in East Falls reaches across the city to encourage and support young people who may be interested in tennis but don’t have the resources to pursue the sport. The Legacy Youth organization was originally named after another tennis great, Arthur Ashe, until a family member requested the name change a few years ago.

I mentioned that Liberty Tennis, the local LGBT tennis organization, has an annual tournament there at the end of July. She gave a “Hmm… ” and said she wasn’t sure what she was doing that weekend.

King also described some of her feelings about being an ambassador to the Olympic Games in Sochi this past winter. The death of her mother prevented her from attending the opening ceremonies, but she was present for the closing event and recalled a poignant encounter with a young gay man during her visit.

“This one young man I spoke to was so grateful that there were people there who he could relate to,” she said. “He couldn’t be open to anyone there. He would have been severely punished and maybe killed. It was both sad and rewarding to be able to talk openly with him.”

She also mentioned her friendship with Elton John and the song “Philadelphia Freedom,” which she says he wrote specifically with her in mind. Whether the Philadelphia Freedoms tennis organization’s name has any connection because of King’s affiliation is unclear.

She is also a huge fan of the Elton John AIDS Foundation and the accomplishments he’s achieved through it.

I then asked King what one specific thing would she tell youth today who may be struggling with any number of personal issues, whether they be LGBT-specific or something else.

Her answer was firm and swift.

“Be true to yourself. Be honest,” she replied. “When I was outed, the hardest thing I did was being honest to myself and everyone around me. It cost me endorsements and it cost me a lot of other things. But in the end, it was the best thing I could have done and I don’t regret it.”