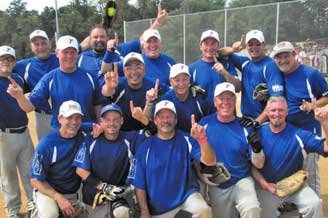 It’s no surprise that sports require some serious finances. There are inside rental fees, outside field-rental fees, insurance, costumes (team shirts, etc.) and other incidentals needed to make an organization run smoothly. Sponsorships help a lot when it comes to the big boys like City of Brotherly Love Softball League and Greater Philadelphia Flag Football League, but not every organization has those resources. Unfortunately, it’s usually the ones that could use it most that can’t find it.

Next year is going to be a very expensive one on many levels. Aside from the usual costs, GPFFL is hosting the 2014 Gay Bowl and is looking to raise about $10,000 to cover expenses of having more than 600 flag footballers in town for several days. Their outreach efforts continue to secure rookie sponsors like Eager and Mazzoni.

Also next year, our Philadelphia Gryphons Rugby Football Club is hoping to send as many players as possible to the Bingham Cup in Sydney, Australia. This biennial tournament honors the memory of Flight 93 passenger Mark Bingham, a rugger with the San Francisco Fog. Round-trip tickets at the moment are pricing at around $2,400 each. Add luggage charges, hotels, meals, and other add-ons and easily it will top $4,000 per player.

Gay Game 9 in Cleveland next August won’t be quite the cost of these two, but there are still some significant costs associated. If you didn’t get registered during the discount window that closed Sept. 15, then you’re ponying up $190 just to be a participant. Add on the player or team participant costs, travel, housing, etc., and it will cost a minimum $1,000 per player.

One of the missions of Team Philadelphia is to foster the establishment of teams and organizations in the area. Another is to be the collective organization that all of the sports participate under at the games. Extrapolating, it should also include assisting athletes who are in need with some financial support to attend the games. Consider the Spartans wrestling, Falcons soccer, Martial Arts, Frontrunners and other small collectives, and even individuals outside of the Philadelphia city lines, who might want to participate but cannot muster the costs personally.

Somewhere, in one of the municipalities surrounding Philadelphia, there is a runner who could medal for Team Philadelphia, but can’t raise the money to go. Somewhere there is a biker or a weightlifter or a pool player or a rodeo-bull rider who would love to go and be among 10,000 international friends, but doesn’t have the income to save it up.

Supporting our LGBT sports programs is something we should do as a community. In fact, there is no reason why larger groups cannot assist the others with their fundraising efforts. How long can any group raise money with limited people and connections? Only until everyone has been tapped dry. Then it all screeches to a halt.