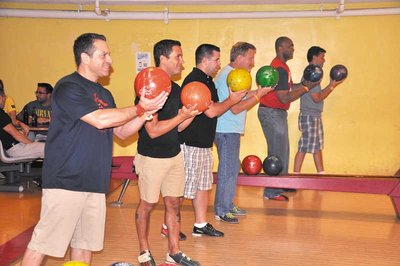 Deadlines and the timing of special events in the LGBT sports world are rarely in synch. Case in point: Within hours of my last column going to press, I got some late, great news on the swimming and diving fronts.

Members of the Fins Aquatics Club headed out to Seattle for the International Gay and Lesbian Aquatics Championships in early August and I am pleased to report that our pool boys and girls set 14 new records, plus 10 participants brought home a total of 71 medals.

Yes, you read that right: 71 medals. The entire Philadelphia sports community and its supporters are so very proud of these men and women for representing us in such a dynamic and dramatic fashion. You can find the details of the results at igla2013.com, and photos and more information at philadelphiafins.org.

As we get more connected through our various social-media platforms, I hope more athletes will cross the boundaries among sports and congratulate each other, attend an occasional event and support fundraising efforts across lines.

Kudos to you, Fins! We are looking forward to another stunning performance next year at the Gay Games.

If you’re looking for some LGBT athletes outdoors the next few weeks, your best bet is at FDR Park in South Philly any weekend. The park is already the fair-weather home of the Liberty City Tennis Association and the Fall Ball stepchild of the City of Brotherly Love Softball League, and now Greater Philadelphia Flag Football League has a home there as well.

GPFFL recently moved this fall from its recent dirt digs at Columbus Park, 12th and Wharton streets, when it became apparent that the space and conditions were no longer suitable for the league or for next year’s Gay Bowl. The first of two skills days is from 9 a.m.-1 p.m. Sept. 7, followed immediately by a kickoff party in the park. The rest of the fall schedule of ball play and horse play can be found at phillyflagfootball.com.

If you live in New York City or are in the city on Sept. 11 this year, make some time for this movie. “The Rugby Player” is the award-winning film about Mark Bingham, his life and love of rugby, as told by his mother. Alice Hoagland recounts stories and shares personal video clips and photos, some of which Bingham took himself. Bingham was one of the leaders of the passenger rebellion on Flight 93 that resulted in the Shenksville crash.

Filmmaker Scott Gracheff will attend the screening 5 p.m. Sept. 11 at Walter Reade Theater and hold a Q&A immediately following. Tickets are $13 and can be purchased online via filmlinc.com/films.

Short stops • The Philadelphia Falcons Soccer Club finished the summer tournament with Fast and Furious Tinkerbells taking the championship. Pick-up play for the fall has returned to Edgley Fields; falcons-soccer.org or facebook.com/falconsoccer. • Gay Games 9 organizers announced that they are working with the Cleveland Metroparks Zoo for a one-of-a-kind 5K race. Runners, start your engines! • Trivia this week: How many local sports organizations celebrate milestones in 2013?

GG9 trivia: Last time, I asked Tom Nobbe and Rob Smitherman of Gay Games 9 where they thought Gay Games X were likely to be. What was their answer? “In Europe.”

The final three sites under consideration are London, Paris and Limerick, Ireland. That’s called playing it safe. It’s also not getting themselves into trouble with Philly rep Dave Killian of the Federation of the Gay Games selection committee.