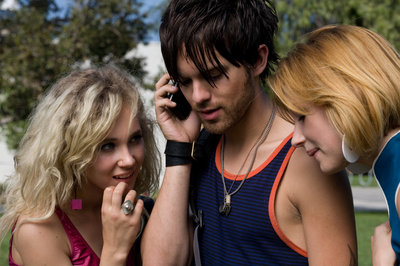 Gregg Araki’s “Kaboom” is a sexy, sci-fi romantic mystery about Smith (Thomas Dekker), a bisexual film student. Smith lusts after his frequently nude surfer roommate Thor (Chris Zylka); is best friends with the wisecracking Stella (Haley Bennett); and has a series of intense, intimate sexual encounters with London (Juno Temple). In addition, Smith thinks animal-masked men are hunting him. In fact, three threaten him one night after he encounters a strange woman from his reccurring dream.

Araki’s film throbs with sexual tension between Smith and Thor, and dramatic tension as the engaging mystery unfolds. “Kaboom” is vivid in both color and style. On the phone from Los Angeles, the filmmaker explains he likes to infuse his work with surrealism. (He even includes a clip of Luis Buñuel’s “Un Chien Andalou” in “Kaboom.”)

“I’m not interested in reality when I go to the movies. I don’t want to see a constructed, controlled vision of the world. That‘s why my films have the colors and pop aesthetic. I want something more stylized.”

The writer/director recounts an observation by his lead actor Dekker: This film is “like my greatest hits — the best bits from every film I’ve done.” He adds, “There is a certain truth to that. ‘Kaboom’ was a return to [my] culty films ‘The Doom Generation’ [1995] and ‘Nowhere’ [1997].”

Those movies were part of Araki’s “Teen Apocalypse Trilogy.” (“Totally F***ed Up” from 1993 was the first in that series.) While “Kaboom” shares a fatalistic quality of those earlier films, it is a decidedly sunnier project despite the ominous title.

“It’s a strange movie to me in that it’s dark and apocalyptic, but it’s fun — there is an optimism. I made it to return to a style unbound by genre, expectation and convention — an experiment in creative freedom. I let the story and the characters do whatever they want. I did not worry about it being too weird, or confusing or different. I was returning to a naïve creative place, and not thinking about marketplace or what’s ‘commercial.’”

“Kaboom” unfolds in its own crazy logic, with characters and plots going off in all kinds of directions. Being along for the ride is part of the fun for viewers.

Araki explains that his inspiration for the film began as “nostalgic recollection.” He cites his college routine of sitting in coffee shops with his best friend and talking about their days, as Smith and Stella do. And he still enjoys being transported by music, as Smith is when he sees his favorite band perform.

“These are pure and real moments,” the filmmaker says about the scenes drawn from his experiences, adding, “All the conspiracy comes in from I don’t know where. I wanted it to be a mystery with an element of intrigue.”

If the characters suffer from an impending sense of doom, it may be because Araki believes teenagers magnify every emotion they have. “When you are young and that age, you are consumed by feelings of apocalypse and that it’s near. I was. Your emotions are so big. Every person you fall in love with, every exam, is so big — it’s the end of the world.”

He also appreciates the “cool metaphor” of the apocalypse becoming real, which may be why he titled his film “Kaboom.”

But can this New Queer Cinema pioneer, whose landmark film “The Living End” was made almost 20 years ago, still relate to teenagers now that he’s 51?

“I don’t know why I can’t,” he remarks, displaying a sassy attitude that is his trademark. “They are fictional characters. It’s not real. ‘Kaboom’ is about 18- and 19-year-olds, but for me, the starting place of the film was revisiting those years of your life — that age of being completely uncertain about every aspect of your life. That was fascinating for me.”

He notes that his age and experience may actually make him more suited to telling stories about teenagers. “People talk about me or Larry Clark, or Gus Van Sant [making film after film about] adolescents. But are teenagers supposed to make these films? For me, teenagers are dramatically interesting because they are unformed, and unpredictable. Most middle-aged people have extremely boring lives that would make boring movies. Teenagers don’t have the ability to make a film about themselves — save Xavier Dolan.” [Fun fact: The 22-year-old Canadian writer/director/actor Dolan’s sophomore feature, “Heartbeats,” opens next week.]

Araki insists that “Kaboom” is his most autobiographical film. He liked portraying that period where who you are, what you will become and how you identify yourself are all “question marks.” He emphasizes that the bisexual and sexually ambiguous experiences the film’s characters are very much geared to that particular time.

“London is not a slut or a nympho: She enjoys sex and it connects her to others and she learns about herself in the process. That’s what the film is about — finding out about yourself. The weird thing about sex [in “Kaboom”] is that it has no consequence — which is shocking in America, such a puritanical place.”

While the filmmaker admits that his years as an undergraduate did not include as much sex as Smith has in the film, he has had relationships with both men and women. Araki’s romance with actress Kathleen Robertson, who starred in the director’s 1999 film “Splendor,” was much discussed in the gay press. When asked how he currently identifies his sexuality, he answers, “It depends on whom I’m talking to. I consider myself essentially gay.”

However, he quickly confirms that today’s generation “is very much not into categories or into strict definitions of sexuality — what it is, or who they are. It’s individual desire and experience. The general loosening of boundaries is healthy and more natural. For political reasons, though, it’s important to declare yourself. There are shades of gray.”

The discussion then turns to the casting of the actors in “Kaboom.” Most of the cast participated in same-sex sex scenes. Back when Araki made “The Living End,” it was hard to find actors — gay or straight — to play queer roles. But the filmmaker said that nowadays, that’s not the case.

“The world is changing so rapidly. For actors in particular, it’s much easier for them [to play gay] in the wake of ‘Brokeback Mountain.’ It’s accepted. There are still actors that won’t do it, but it’s easier than it used to be. I don’t try to deliberately cast queer actors — I don’t care who they sleep with. Obviously, it would be cool to have an openly gay actor in a film, but it’s not an overriding factor.”

So is Araki, the one-time “enfant terrible” of the New Queer Cinema era, mellowing? Perhaps.

“The weird thing about this movie is that I find it very different from ‘Doom Generation.’ Although it has immature characters, it has a maturity about it. ‘Doom Generation’ was something I made when I was younger and angrier. Being younger, and of the mindset of the characters, I had a different perspective. There’s a certain level of wisdom here. Looking back on life at middle age, [college] was some of the best years. Stella says — she’s a mouthpiece for what I think about that period — that those years are about your experiences, not your exams/classes. What you get out of that period is the people you meet and relationships you have — that is your growth as a person. That was the starting point for ‘Kaboom.’”