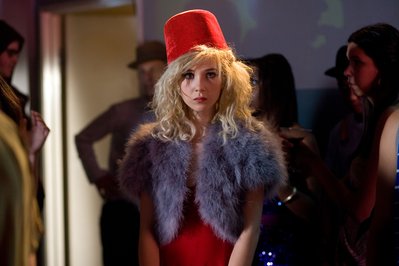 “Kaboom” is classic Gregg Araki — even if it isn’t “a classic” along the lines of his best films, “The Living End” and “Mysterious Skin. ” This heady, spellbinding good time boasts the director’s typical visual flair, as well as many of his hallmarks — smartass dialogue, uninhibited queer sexuality and film references galore. Both new and longtime fans will find multiple pleasures in what is essentially a B-movie about oversexed college students, mysterious goings-on and supernatural powers.

For everyone else, here is a warning: “Kaboom” is chock-full of nudity, sex and gore; violence, vomit and dog shit; drugs, dreams and disturbing behavior; and both cool and cheesy special effects. Ararki juggles all these disparate elements in a psychedelic framework that revolves around a vibrant color scheme and is underscored by a dreamy soundtrack. It’s all very vivid.

Meanwhile, his best friend Stella (Haley Bennett, fabulously deadpan and wonderfully costumed) is sexually involved with Lorelei (Roxane Mesquida), who, it is revealed, is a witch.

“Kaboom” keeps viewers — like the film’s characters — off guard as the various plots rise, develop and converge. As Smith follows the mysterious clues to pursue the identity of the masked men and what (if anything) they are after, Araki introduces a fair number of freaky moments — from possible hallucinations to some really sinister food. A clever match cut makes an innocent stack of pancakes resemble something icky.

Yet the smart visual and aural cues Araki uses are more amusing than actually scary. A sequence juxtaposing Smith and his girlfriend London’s (Juno Temple) sex with Stella and Lorelei’s bedroom activity serves to re-emphasize the characters’ fluid sexuality.

While “Kaboom” shows Araki is being clever — perhaps too clever — the sci-fi/horror/sex/comedy genre mash-up works well because the film is all just one really big tease. From the palpable sexual fantasies Smith has about hot guys, to determining if the mystery is real or all just a dream, Araki keeps viewers guessing until the final moment. And it’s a doozy of a punchline.