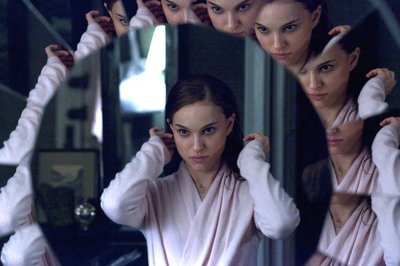 Darren Aronofsky’s deliriously entertaining “Black Swan” chronicles a ballerina’s pas de deux with danger. This film is the cinematic equivalent of a funhouse — it is full of thrills and mirrors and a disdain for reality. Both serious and silly, audiences who give themselves over to this operatic fever dream will have a hell of a good time.

Nina (Natalie Portman) is a young dancer in a New York City ballet company who dreams of playing the Swan Queen in Thomas Leroy’s (Vincent Cassel) new production of “Swan Lake.” Nina is — as her mother (Barbara Hershey, a good physical match for Portman) declares — “a sweet girl.” So while Thomas thinks she is perfect for the production’s White Swan, it will be a stretch for her to play the evil twin/Black Swan.

Viewers know that Nina won’t be very good for very long. She bites Thomas’ lip when he kisses her, which shows she has some moxie. But Nina does not truly “let go” until she meets Lily (Mila Kunis), a mysterious new dancer in the company who becomes her understudy and projects the “dark impulses” that both attract and repel Nina.

Aronofsky’s film moves, like Lily does, imprecisely but effortlessly through the motions of Nina’s radical transformation. The dancer Nina slowly gives herself over to the dark side — stealing the lipstick from an aging, forced-to-retire ballerina, Beth (Winona Ryder). Then, she takes her smothering mother to task by rebelling. When Lily offers to take Nina out one night, the pair takes some drugs and has a passionate evening of lesbian sex that liberates Nina. But the consequences of this pleasurable night only serve to further fuel Nina’s jealousy and self-destructive behavior.

“Black Swan” creates its dramatic tension as Nina pursues her unrelenting quest to be “perfect.” Clues are dropped throughout the film that something is not quite right, and that she is descending into a kind of madness. The film uses many visual cues — some real, some imagined — that show how this uptight ballet dancer is becoming unhinged. Viewers will have fun trying to catch all the signposts. Some, like the stuffed animals and music box that populate Nina’s childish bedroom, or the (swan?) wings tattooed on Lily’s back, are obvious. But others, such as a portrait that comes briefly to life in an early scene, or a door that was locked — or wasn’t it? — are subtler. Nina’s visions, which get increasingly more disturbing, will have audiences guessing about what is really happening.

Aronofsky is in complete control here. He uses elegant sounds, such as the fluttering of feathers, to ruffle viewers, and as Nina’s mind starts to crumble, there are some rather shocking scenes. There is much ado about fingers and toes — as well as fingernails and toenails — cracking, scratching and being cut, and much of it is unnerving.

Despite a handful of ridiculous moments — which should not be revealed so as not to spoil the film’s very guilty pleasures — “Black Swan” is mesmerizing. This is mainly because Portman gives an extraordinary performance. She convincingly portrays Nina’s struggles with sanity and gains viewers’ sympathy even as she succumbs to her many pressures.

While the film is not very deep, it is immensely enjoyable. Watching Portman practice her ballet is hypnotic, but things get much more interesting and intense when Nina masturbates — Thomas tells Nina to “touch herself” to get in touch with her Black Swan — or when Nina falls under Lily’s sexual spell.

Kunis is deliciously seductive in her role, and were it not for the strength of her bewitching performance, “Black Swan” would not work as well as it does. The two women are a deliberate study in contrasts, and that makes their professional rivalry and sexual relationships so compelling. When Nina spies Lily rehearsing to “her” music, Nina’s frisson escalates. There is even a fabulous knockdown, drag-out catfight — well, sort of.

Aronofsky deliberately emphasizes mood over plot here. The story is, as Thomas says, “one we all know,” and “Black Swan” injects new life by making this backstage drama of love, seduction and death into something a bit naughty and uncomfortable. Is lesbian sex the key to Nina’s professional breakthrough? Does she have an overactive imagination? The truth hardly matters. Especially when “Black Swan” is so much fun, twirling itself until it — and viewers — become dizzy.