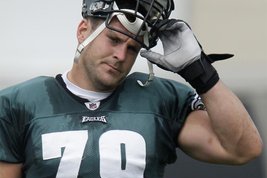 A member of the Philadelphia Eagles, evidently upset that the latest episode of popular HBO vampire series “True Blood” included a gay-male sex scene, vented his opinions on a social-networking site this week.

Herremans’ Tweet read: “So.. caught up on Trueblood las nite.. Not a fan of how they get u hooked with the 1st 2 seasons then bring on a barrage of homosexuality..”

The message was posted shortly before 9 a.m. Aug. 10 but was deleted by 11:30 a.m., replaced by an apology: “After speaking with Eagles management, I realize that my tweet earlier was insensitive and tasteless, and for this, I deeply apologize.”

Several minutes later, Herremans also tweeted: “It was not my intention to offend or hurt anyone.”

Philadelphia Inquirer columnist John Gonzalez spotted the original tweet and contacted Herremans through Twitter, asking for an on-the-record explanation. Gonzalez reported in his column that Herremans wrote him: “I have no issues with homosesxuality, to each his/her own…Its just not for me..#jussayin.”

Shortly after, the exchange with Gonzalez and the original tweet were deleted, replaced with the apology.

Pamela Browner White, senior vice president of public affairs and government relations for the Eagles, said the football club’s “response was clear and decisive and was reflected in Herremans’ follow-up tweet.”

When contacted by PGN on Tuesday, an HBO media-relations representative hadn’t yet heard about the tweets.

“True Blood” has often been thought to provide a social commentary on the oppression of LGBT individuals — with signs such as “God Hates Fangs” appearing in the opening credits for the show.