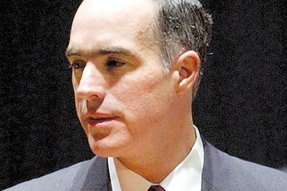 The bill would require that any public schools that receive federal funding develop anti-bullying policies that specifically prohibit bullying motivated by certain characteristics, including sexual orientation and gender identity. The measure would also mandate that schools and districts have effective prevention strategies in place to combat classroom harassment and would compel states to compile data on incidence of bullying and report the statistics to the U.S. Department of Education.

Casey said the alarming statistics about school bullying motivated him to lead the fight for the bill in the Senate.

He noted that while students from any background can be subject to bullying, LGBT youth are particular targets, with the Gay, Lesbian and Straight Education Network citing that nine out of 10 gay youth have reported classroom harassment.

“It’s bad enough if it was one or two out of 10, but a number that high is just disturbing,” he said. “I think people are sick and tired of reading about incidents after they’ve happened. For a student to be harassed to the point of suicide or where he can’t function or is subject to violence, it’s just wrong. And there are larger numbers of kids that we don’t hear about, those who skip school because they’re afraid.”

Casey asserted that the lack of a federal anti-bullying mandate exposes too many youth to dangerous circumstances, which he said can be quelled through his bill.

“In the end, it’s about one word: betrayal. Public officials say over and over again that they care about the kids and that they want to invest more dollars in schools, and I’m all for that, but all the dollars in the world can’t prevent a child from the horrific nightmare many face when they’re afraid to go to school,” he said. “I’ve never had that experience, I never was threatened or felt like someone was going to do me harm, so it’s hard for me to even fully appreciate or understand the horror so many kids go through every single day.”

Casey noted that enhanced accountability on the part of schools and administrators could go a long way to preventing such situations — but said the issue needs more widespread support.

“I think of it somewhat like drunk driving. There was a time in history where drunk driving was just accepted by society, but we’re to the point now where it’s not eliminated, but it’s become unacceptable,” he said. “I hope we can reach a point in the future where this kind of behavior will also be frowned upon and those that engage in it are held accountable.”

Casey acknowledged that the fact that the bill is LGBT-inclusive could sway some legislators away from supporting it, but he said the support he’s already seen is solid.

“It is possible, but we have a pretty good list of cosponsors right now,” he said. “We have people who are chair of committees and people from all across the country, so it is significant. But we do need a few Republicans to stand up and join our bill.”

Casey said the measure is a “priority” and, while he didn’t put a timeline on when movement could be expected, he was committed to pushing it forward as soon as he can and to looking for alternative routes to passage, like attaching it to a larger education measure.

Pennsylvania Sen. Arlen Specter (D) had not signed on to the bill yet, and his office did not return a request for comment by press time.