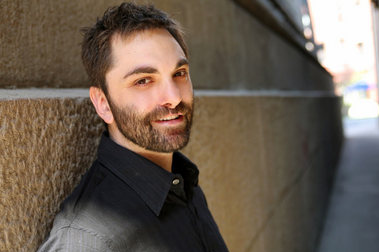 Christopher Shinn knows how to make the most of very little.

In his dark and gripping drama “Dying City,” the openly gay playwright and Pulitzer Prize finalist needs only two actors, three characters and a sparse stage to tackle issues such as loss, grief and identity in the shadows of war.

“I wanted the play to be really primal and I thought that two actors on a relatively bare stage was about as primal as you can get,” he said. “I wanted a play that would strip away any ability to distract the audience and get off the main track. Let me put one man and one woman on a basically bare stage and really stay in the intensity of that kind of showdown.”

The drama in “Dying City” revolves around Peter and Kelly, played by Nathan Emmons and Pamela Sabaugh, respectively. Both are trying to cope and move on after the loss of Craig, Kelly’s husband and Peter’s twin brother, who died fighting in Iraq.

Shinn said that while the Iraq War is the catalyst for the drama in “Dying City,” the play isn’t meant as a commentary on the war.

“I don’t believe in making political statements in art,” he said. “I think art has a place in exploring the political, but first and foremost I wanted to reveal people in all their depth and complexity.”

And there is enough complexity to go around. Emmons plays both Peter, who is gay, and Craig (in flashbacks) in “Dying City.” Shinn said that having identical twins of differing sexuality adds to the hard questions about truth and identity in the play.

“I think it’s interesting when you think of identical twins because, particularly with gay people, there’s a lot of speculation on what causes homosexuality,” he said. “Is it genetic? Is it physiological or hormonal? Does it have to do with early childhood experiences? Most studies done of identical twins show that they share the same sexuality about 50 percent of the time. You can look at it two ways. It would seem that maybe there is a genetic component at least in half the cases. But in the other half, you can’t explain the different sexualities based on what people are born with. I think that really raises fascinating questions about what human sexuality is. My interest in the human psyche and looking at identical twins is an interesting way to ask how are we the same and how are we different based on the experiences we go through.”

“Dying City” is just the latest in the OBIE award-winning playwright’s repertoire of tales of secrecy and tragedy, which Shinn said are universal to the human experience.

“Everybody has secrets,” he said. “There’s no way to get through life without experiencing loss. Those are two things that only reoccur [in my work] only because they are so prominent in the lives of every human being.”

Shinn added that while his stories and plays are in no way based on his own life, they do emanate from his “unconscious.”

“I just try to remain open to whatever is happening inside of me,” he said of his inspiration. “That doesn’t feel like it comes from me or certainly anything deliberate on my part. And once that starts happening, I just try to make more and more space for it to happen of its own accord. Then I just try to pay attention to it. There’s very little that’s autobiographical, but there’s no way to write outside of your own experience. Everything I write comes from inside of me. I think it’s the only authentic way to do it. I think that every character in every play I’ve written represents a part of me.”

Amaryllis Theatre Company presents “Dying City” through Feb. 22 at The Playground at the Adrienne, 2030 Sansom St. For more information, visit www.amaryllistheatre.org or call (215) 564-2431.