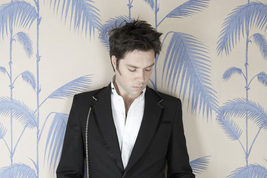 If the idea of flowers, a heart-shaped box of fancy chocolates and an overpriced dinner just aren’t doing it for you this Valentine’s Day, take heart (no pun intended), as the City of Brotherly Love is overflowing with concerts that are sure to set the mood.

One of the hottest tickets in town is sure to be out singer/songwriter Rufus Wainwright, who is taking a break from his latest project to perform at 8 p.m. Feb. 14 at Kimmel’s Verizon Hall, 260 S. Broad St.

How did Philly get so lucky?

“I’m pretty homebound these days writing this opera that’s premiering July 10,” Wainwright said of the upcoming “Prima Donna.” “One of the perks of New York is it’s close to Philadelphia. There’s this incredible metropolis just an hour away. Also, I really, really am dying for a cheesesteak sandwich, I have to admit. I’ve been thinking about it for months.”

It’s hard to imagine that Philly’s signature delicacy would be enough to entice Wainwright to venture south and work on Valentine’s Day, but fortunately love has put the troubadour in a generous mood.

“I have an amazing boyfriend who really treats every day like Valentine’s Day, almost to annoyance occasionally,” Wainwright said. “So it’s nice to come out and spread the love that I am getting to the rest of the people. I’ve got to dump some love.”

Nothing screams Valentine’s Day like the words “spread” and “dump,” but Wainwright is confident that this special intimate performance will be more than enough to fan the flames of romance.

“It’s my solo show,” he said of what his fans can expect. “Every show is kind of different from the next. Unlike the ‘Release the Star’ shows, those are always set lists with costumes and lights. This show really depends on the mood of the evening and the mood of my subconscious. And also who’s cute in the audience.”

Rufus will be joined by his sister, fellow singer-songwriter Martha Wainwright, as his opening act.

“We’re definitely singing together,” he said. “If we didn’t sing together, my mother would cut me.”

See Rufus while you can, as next time he’ll be behind the scenes launching his first opera, a role he finds himself adapting to with surprising ease.

“I’m excited, and horrified as well, by how easily I’ve fit into the maniacal composer role,” he said. “I’m just ready to chop off heads and maim people to get my art ahead. It’s very classical, melodic and romantic. I’m leaning on what I know best. I think it’s still viable and it’s not a throwback necessarily, but you can basically hear the music that has influenced me over the years. I’m not pulling any freaky punches. Just sit down and enjoy the beauty.”

Like Wainwright, Philadelphia-based singer and bandleader Eddie Bruce has an appreciation for the classics as well, which may be why he’s performing a tribute to Tony Bennett through Feb. 22 at Morgan’s Cabaret at The Prince Music Theatre, 1412 Chestnut St.

From an early age, Bruce seemed destined to become one of the most sought-after bandleaders in the region, as well as a tireless performer and cabaret artist — who now has more that 3,000 shows under his belt, playing everything from Top 40, R&B, disco, house and swing. But jazz was his first love.

“All my friends were listening to The Beatles and The Stones,” he said. “I was listening to Tony Bennett and Ella Fitzgerald, all the great jazz singers. When I was a really little kid, like 6 or 7 years old, my mother took me to The Latin [Casino] when it was in Philly and the headliner was Ella Fitzgerald. Growing up in the city where the ‘Friday With Frank Show’ was on every night, I got to listen to Frank Sinatra every night growing up. That had a great influence on me learning all these songs and my appreciation for the Great American Songbook.”

Bruce has been a fan of Bennett for most of his life, but it wasn’t until he caught one of Bennett’s recent concerts that he considered putting together a tribute performance.

“The inspiration to do the Bennett show itself came from having seen him at the Mann Music Center two years ago and being reminded of how much his music has meant to me,” he said. “A lot of his songs over the years have played a role in my life and so I thought this might be an honest kind of show to be able to talk about how these song parallel some of my experiences.”

Bruce said he even went out of his way to buy a front-row seat for the show so he could study the legendary performer’s every nuance.

“I learned an incredible amount of things watching that close,” he said. “One of the astounding things for me was at 81 years old, he did 90 minutes without even a sip of water or sitting down on a stool. It was an extremely vigorous performance for a man that age.”