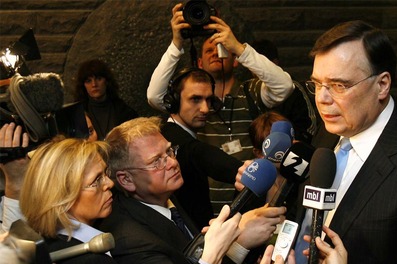 The fall of Iceland’s government could pave the way for the world’s first lesbian prime minister, Johanna Sigurdardottir.

The government collapsed after it was unable to weather the financial crisis, which had severely affected the Icelandic banking system.

The President of Iceland recently asked Social Democratic Party leader Ingibjorg Gisladottir to try to form an interim administration after the country’s prime minister stepped down and the entire Cabinet resigned on Jan. 26.

A general election has been called for May 9.

Former Prime Minister Geir Haarde had hoped he and his Independence Party could continue in coalition with the Social Democrats, but negotiations broke down on Jan. 26 and the coalition was dissolved.

“I have decided to ask the leaders of the Social Democratic Alliance and the Left-Green Party to engage in conversation about forming a new minority government backed by the Progressive Party,” said President Olafur Ragnar Grimsson on Jan. 27. “Therefore, I give Ingibjorg Gisladottir the mandate to lead the talks.”

“We have taken the baton — the government should be operational before the weekend,” she said after the president’s statement.

If chosen, Sigurdardottir, 66, will become the first openly gay or lesbian person to become a head of government.

She has been a member of Parliment since 1978 and was recently voted the most popular politician in Iceland.

Swedish Prime Minister Fredrik Reinfeldt announced on Jan. 21 that legislation allowing same-sex couples to marry is on track and should become law by May 1.

Reinfeldt said he is confident the legislation will be approved by Parliament despite the lack of support from one of the parties in his four-party coalition government.

The junior Christian Democrats said they are not opposed to giving same-sex couples all of the rights of marriage but are against using the word marriage.

The opposition Social Democrats have endorsed the bill, and Reinfeldt said that even without Christian Democrat support, he has the votes to ensure passage.

The bill would allow same-sex couples to have either civil marriages or church weddings in those denominations that approve them.

The Swedish Lutheran Church has offered blessing services for couples in civil unions since 2007 but has balked at allowing pastors to perform weddings for gay couples.

The Lutheran Church comprises more than 70 percent of Sweden’s population, although few are churchgoers. Until 2000, it was the state church in Sweden.

Passage of the bill would make Sweden the fourth European country, after Holland, Belgium and Spain, to allow same-sex marriage. A marriage bill is under consideration in Norway. The United Kingdom affords gay couples all of the rights and obligations of marriage but without the name. Several other countries in the European Union, such as Germany and France, allow same-sex couples limited rights.

The government of Bahrain has cracked down on a number of social-networking sites, a move that has hit the nation’s gay and lesbian population hard.

The Islamic state is more liberal than neighbors like Saudi Arabia, but it still does not embrace gay people. The ban on social-networking sites, including a site known as Gaydar.com, has forced the country’s gay population to meet in public, placing them at risk for harm from family, friends and strangers.

One gay Bahraini man said the crackdown would lead to pornography being sold on the black market.

“I also think a lot of expats will end up leaving now,” said the man, who asked to remain anonymous. “They live here mainly because Bahrain is more liberal.”

Turkey’s Supreme Court of Appeals has overturned a lower-court ruling that ordered the closure of the country’s largest LGBT civil-rights group.

Homosexuality has been decriminalized in Turkey as the country attempts to join the European Union, but gays and lesbians regularly report they are abused by police and discriminated against.

Last April, for the second time in a year, police raided the offices of the Lambda Istanbul Cultural Center.

A dozen police officers were armed with a search warrant that said the center was suspected of being a business that “facilitates prostitution, acts as a go-between [and] provides a place for [prostitution],” offenses criminalized under Turkey’s Penal Code.

A judge, with little evidence from the prosecution, found the organization guilty and ordered police to seal the doors.

The group appealed and the ruling rescinding the order was communicated to Lambda Istanbul’s lawyers on Jan. 20.

The Supreme Court of Appeals rejected the local court’s decision on the grounds that reference to LGBT people in the name and the statute of the association did not constitute opposition to Turkish moral values. The high court’s judgment also recognized the right of LGBT individuals to form associations.

The case will now go back to the local court in Istanbul. That court is expected to uphold the Supreme Court of Appeals’ decision.

“This is an important decision upholding the rights of freedom of association and nondiscrimination,” said Andrew Gardner, Amnesty International’s Turkey spokesperson. “The judgment should send a clear message to the authorities not to interfere in the legitimate work of LGBT organizations.”

Human Rights Watch said it found that, in most cases, the response by the authorities was inadequate if not nonexistent.

Four fans have been banned from British soccer games for three years after pleading guilty to yelling indecent chants at Portsmouth defender Sol Campbell during a Tottenham game that was marred by racist and homophobic crowd behavior.

Seven more pleaded not guilty in the case opened at Portsmouth Magistrates Court.

At the Sept. 28 game, police identified fans who allegedly aimed indecent, racist or homophobic chants at Campbell, who has been regularly criticized by Tottenham fans since he changed teams seven years ago.

“There were families present, very young children. We also heard from witnesses who found the behavior disgusting and embarrassing,” magistrate Susan Waddle told the four men who admitted to the charge.

“No doubt you are upright members of society, but in there you acted like animals, like a herd,” Waddle said. “This was well-rehearsed, everyone was in sync, everyone knew the words. It was not something that just happened on the day. Whether or not Mr. Campbell was offended, decent members of the public found this very offensive and so did the [court]. Anyone who indulges in this disgusting behavior will be dealt with very severely by the courts.”

A Beirut-based gay-rights group that recently won an award for its work is claiming brutality after two men were beaten and arrested by soldiers.

In a statement on its Web site, Helem condemned a recent attack where two gay men were having sex in the lobby of an uninhabited building in Ashrafieh, a suburb of Beirut. They were allegedly discovered by Lebanese Army soldiers, dragged out into the street and severely beaten.

“One, half-naked, was even exhibited to bystanders attracted to the show, just for fun,” according to Helem.

Bystanders intervened and the beating ended.

The men were held overnight at a military barracks and have been handed over to civil authorities. They remain in custody.

“It is high time that the country’s lawmakers looked at an obsolete, ridiculous law that condemns and punishes homosexuality in Lebanon,” Helem said. “At a time when gay marriage is permitted in many countries, the authorities hypocritically deny the simplest expression of reality, but they will have to face it one day or another.”

Article 534 of the Lebanese Penal Code prohibits sexual relations that are “contradicting the laws of nature,” which is punishable by up to a year in prison.

The International Gay and Lesbian Human Rights Commission recently announced that it would award its 2009 Felipa de Souza Award to Helem.

Founded in 2004, Helem (Arabic acronym of “Lebanese Protection for Lesbians, Gays, Bisexuals and Transgender”) is based in Beirut, with support chapters in Australia, France, Canada and the United States.

The award recognizes the courage and effectiveness of groups or leaders dedicated to improving the human rights of LGBTI and other individuals stigmatized and abused because of their sexual orientation or HIV status.

“The first organization in the Arab world to set up a gay and lesbian community centre, Helem’s work has consistently broken new ground in a country that criminalizes homosexuality and where violence and abuse are persistent problems,” the IGLHRC said.