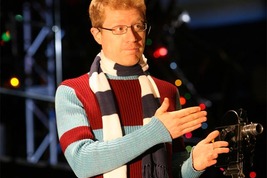 The return of the Broadway touring production “Rent” to Philadelphia is enough to celebrate on its own. But this tour promises to be extra special as it features original cast members Adam Pascal and Anthony Rapp reprising their roles as Roger and Mark, respectively.

The immensely popular brainchild of late playwright Jonathan Larson exploded onto the Broadway scene in the mid-1990s with its rock-opera mentality, a willingness to tackle issues like AIDS and an array of characters trying to survive and find love and happiness in New York’s East Village. Along the way, “Rent” won numerous awards (The New York Drama Critics Circle Award, The Drama Desk Award, The Obie Award, the Tony Award and the Pulitzer Prize), played to audiences all over the world and propelled the careers of many of the original cast members, including Rapp, who said he enjoys being able to return to a role that was so pivotal in his own career.

“I’ve been acting professionally since I was 9 years old,” the openly gay actor and activist said. “I’m 37, so it’s 28 years. I’ve done a lot of really cool things that I’m proud of in a lot of my years as an actor. But it’s only this one project that has been a fulfillment of everything that I want to do, which is to simply entertain. ‘Rent’ does entertain, but to be part of something that means something in the world that can have an impact on people’s lives … it certainly had an impact on mine, but it continues to have an impact on many people’s lives. It helps them through crises, inspires them, moves them or helps them to remember loved ones that they lost. Just to be part of something that is bigger than the normal everyday entertainment is very, very meaningful. It’s rare that you have the opportunity to have that once in a lifetime, let alone twice or more. When they kept asking me and the circumstances worked out very well each time, it made sense to keep coming back.”

Rapp has returned to “Rent” a number of times in his career, including the stage production in 2007 and the big-budget film adaptation in 2005. While it starred most of the original cast, it received mixed reviews and wasn’t considered a success by Hollywood standards. Nevertheless, Rapp said the film continues to feed the success of the stage productions.

“Even though the film wasn’t a box-office success, it’s done well on video and it’s been shown on cable,” he said. “Even if we’re talking economy of scale, a film that doesn’t do that great but grosses $30 million at the box office, it’s still seen by however many millions of people. That’s quite a lot of people, considering it would take the show being sold out every night on Broadway for two years to be seen by 1 million people.”

Rapp, much like the world depicted in the play, is different from when “Rent” first debuted. He said that revisiting Mark is like revisiting his younger self.

“I do feel like I’ve grown up,” he said. “I’m older than Mark. I’ve moved through and past some of the things that Mark struggles with. But I think they were closer to things I struggled with at the time that I first did the show. So in some ways, doing the show is not only a time warp to when we first did it all those years ago, but it’s a time warp to an earlier version of myself.”

While society has shifted its focus away from some of the issues at the core of “Rent,” Rapp said the show is still important to generations that have become increasingly jaded about the world around them.

“In the United States there has been some complacency in thinking about AIDS and HIV in our own country,” he said. “There’s more awareness of the plight of people living with AIDS and HIV in Africa that developed. Unfortunately, there are people among us who are still living with it every day and they’ve been a little more forgotten. So hopefully ‘Rent’ can just keep reminding people of that chapter of our history and that it is also still part of our lives today.”

The staying power of “Rent” speaks for itself and many young and aspiring Broadway hopefuls cite it as a favorite, an influence or the reason they wanted to get on stage. Surely it would be a thrill for them to be cast in this production with Rapp and Pascal, though Rapp said if any of his colleagues fall into that category, they have been very professional about it.

“I’m not sure they would tell me either,” he said. “People have said that it’s exciting to do the show with us, but they haven’t gone over the top in any way to try and talk to us about that, which is more than fine. We assembled an amazing group of people. We’re very lucky. On and off stage, they’re fantastic people.”

According to Rapp, the play’s ability to speak to newer and younger audiences is the reason it will continue to win fans and have a profound impact.

“My perspective remains that it tells the truth. It tells the truth about love, loss, passion and compassion,” he said. “What people do in a crisis and the questions that it asks are still as relevant and powerful now as they were then. The details of the way the East Village is now is quite different from when it debuted. But those are details, just like if you were to do Shakespeare today. The details of the politics of kingly courts, that’s different. But the themes, the questions, the ideas and the characters — those things are timeless.”