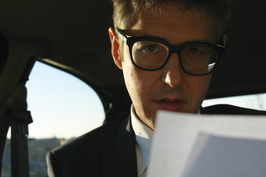 THEATER Altar Boyz The Media Theatre presents the satirical story of a Christian boy band from Ohio dealing with the marketing of religion, the judgments people make toward one another and the fact that everyone should basically be just who they are, Jan. 28-Feb. 15, 104 E. State St., Media; (610) 891-0100.

Give My Regards to Broadway The Kimmel Center’s Broadway Series presents the story of how Broadway developed into a purely American art form, through Feb. 1 at Kimmel’s Innovation Studio, 260 S. Broad St.; (215) 893-1999.

O Captain, My Captain: Whitman’s Lincoln The Walnut Street Theatre’s Independence Studio on 3 presents the story of two great men with one grand vision for America, through Feb. 8, 825 Walnut St.; (215) 574-3550.

The Rant InterAct Theatre Company presents a new drama in which the witnesses of the shooting of a young African-American teenager offer varying accounts of the event, through Feb. 22 on the Mainstage of The Adrienne, 2030 Sansom St.; (215) 568-8079.

Sugar Town’s Eighth Anniversary The monthly show of lady rockers and DJs features transgender punk group The Shondes along with The Lemon Treasures, She Ends All and DJ FCK Yeah at 9 p.m. Jan. 23 at Tritone, 1508 South St.; (215) 545-0475.

Urban Organic The City of Philadelphia Mural Arts Program and the Center for Emerging Visual Artists present an exhibition of work by eight artists affiliated with both organizations, through Jan. 31 at Projects Gallery, 629 N. Second St.; (267) 303-9652.

Works on Paper 2009 Philadelphia Sketch Club presents an exhibition featuring works on paper by many of the prominent artists of the region in a variety of media, including transparent watercolor, gouache, acrylics, prints and collage, through Jan. 24, 235 S. Camac St.; (215) 545-9298.

Yumi Kori: utatane The Japan-based architect transforms the Goldie Paley Gallery at Moore College of Art using video and sound to create a multi-sensory, interactive environment, through March 14, 20th Street and The Parkway; (215) 965-4027.

Philadelphia Chamber Chorus PCC is auditioning singers of all voice parts for its 2009 season on Jan. 26 and Feb. 2; call (610) 352-3565 or e-mail [email protected] for details and an appointment; www.philachamberchorus.org.

Italy! Inside the Tuscan Hills Filmmaker John Wilson presents a vivid portrait of a place where ancient traditions have never disappeared and gives an insider’s look at the rich rural culture of Tuscany, at 2 and 7:30 p.m. Jan. 28 at The Academy of Natural Sciences, 19 Ben Franklin Parkway; (610) 649-5220.